Hey, hi, fellow Halloweenies! This month can be pretty overwhelming in deciding what activities to do (sadly, the Tompkins Square Park Dog Parade has been cancelled; long live the Great PUPkin) and the good and the bad news is your selection of movies is no exception.

Even if you already cut up your MoviePass card—I know I did—it’s worth remembering that spooky flicks are worth the trip. There’s no substitute for hearing some folks scream too much, or to have that one person yell at somebody onscreen to not go up the dark staircase. The amount of big screens in the city isn’t shrinking, and aside from the shiny new fare that’s hitting multiplexes, there’s plenty of fun that may have missed your radar for all tastes and needs, spanning decades, continents, and styles. There are your sleepover classics, the classic monsters of old, snappy comedies, trippy dreamscapes, folk tales, and delivery services for blood by the gallon. And for the real adventurers, Brooklyn Horror Film Festival will be stopping by several local spots. Here are the highlights of what’s slashing to a theater near you.

Metrograph (7 Ludlow St, Manhattan)
The maestro behind some of the most gorgeously designed and lit films, regardless of genre, Dario Argento has become more widely celebrated in recent years for his operatic and lush horror classics. His retrospective is mostly over, but a chunk of his treasures, including the original Suspiria, which you should absolutely catch before the remake dances along, will see an encore presentation. Shaw Brothers, globally acclaimed for their kung-fu flicks, produced some batty, filthy horror that will finally get its New York due.

For you early-risers, Abbott and Costello Meet Frankenstein will play as part of their kid-oriented matinees (fun fact: it’s this writer’s all-time favorite movie). Then there’s a special evening with make-up guru Tom Savini, who pioneered gore effects in movies like Creepshow and Dawn of the Dead. He co-stars in Robert Rodriguez and Quentin Tarantino’s vampiric road trip From Dusk til Dawn, which also plays with Savini himself in attendance. Yamamoto’s “Bloodthirsty Trilogy” offers a spin on traditionally western horror lore with The Vampire Doll, Evil of Dracula, and Lake of Dracula. If that doesn’t excite you, I suggest you read that last title again.

Film Forum (209 W Houston St, Manhattan)
The recently-reopened mainstay’s spooky fare is small but sweet. Years before A24 boasted a heart chart to sell folks on just how scary Hereditary is, gimmick master William Castle would parade skeletons and insurance waivers out in the middle of his screenings, and in the case of The Tingler, he installed buzzers under theater seats to literally shock viewers when the monster appeared. The progenitor to questionable 4DX screenings, the novelty is the real attraction, and is what this holiday is all about; fitfully, it screens on Halloween night. For a real throwback, a classic Universal Monster matinee: Son of Frankenstein, with Bela Lugosi and Boris Karloff, a duo nearly matched by its preceding attraction: the Merrie Melodies cartoon Hair Raising Hare, starring Bugs Bunny and Gossamer!

IFC Center (323 6th Ave, Manhattan)
Those who haven’t yet caught Mandy, the psychedelic revenge thriller that finally pins doom metal and Nicolas Cage together, still have a chance. And, hey, have you seen the original Suspiria?

Quad (34 West 13th St, Manhattan)
Never heard of Jean Rollin? Don’t worry, I barely did until Quad announced this new retrospective, and now I’m hooked. Zombies, witches, and vampires are all amuck in his world, one that is classically composed and deliciously erotic. There is care to these films, which is never just an excuse to gawk at the female form. The Shiver of the Vampires provides trippy colors brighter than the French flag, starkly contrasting with the grim fog of The Grapes of Death. His masterpiece, Fascination, is most famous for an image of a cloaked blonde wielding a scythe. Truly a defining image for the present moment. And if one bevy of bloodsoaked beauties weren’t enough, Quad just announced A Woman’s Bite: Cinemas Sapphic Vampires.

Village East Cinema (181-189 2nd Ave, Manhattan)
Suit up, drag fans; Hedda Lettuce is back with the original Carrie starring Sissy Spacek, John Travolta, and, most importantly, Piper Laurie as the most monstrous “Bad Mom” in horror. Hitchcocktober returns with a mostly bloodless span of suspenseful classics, culminating in Psycho on Halloween night. Bored of Rocky Horror? The bouncy musical Little Shop of Horrors may just be a better movie. Fight me.

MoMA (11 W 53rd St, Manhattan)
That legendary creepy voice from Michael Jackson’s “Thriller,” Vincent Price left a sumptuous body of horrors. Chief among are his Edgar Allan Poe collaborations with indie pioneer Roger Corman—The Masque of the Red Death, House of Usher, and The Pit and the Pendulum. If that’s too fancy, the original The Fly ought to satisfy your classic camp needs. Hammer Films produced England’s answer to the classic Universal Studio monsters from the 1950s onward, especially Frankenstein. In honor of Mary Shelley’s classic novel’s bicentennial, A Frankenstein Septet is served in conjunction with the Morgan Library, and the films are Gothic and atmospheric and pull few punches in pointing the horrors of man’s need to bastardize natural order. 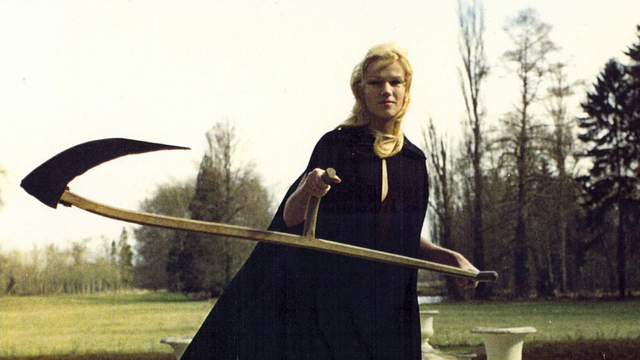 Alamo Drafthouse (445 Albee Square, Brooklyn)
Woof, where to begin? The demented erotic Pee Wee’s Haunted House nonsense of Dr. Caligari makes a rare sighting; Phantasm screens with an appearance from director Don Coscarelli; another appearance from Fascination; the swingin’ sexy stylings of The Love Witch… and there’s still Ganja & Hess and Deadly Eyes to anticipate. Thirty years later, the ultimate Halloween party movie remains Night of the Demons, but an unlikely theme on Halloween night may provide a worthy opponent: John Waters. A screening of Desperate Living will take place, and audience members are invited to dress up as their favorite Dreamlanders. Things may—and probably should—get filthy.

BAM (30 Lafayette Ave, Brooklyn)
Although the September programming seemed to jump the spooky gun early with the original Texas Chain Saw Massacre, the “Beyond the Canon” series this month presents a more pressing horror: false religious leaders. Night of the Hunter, the Southern Gothic classic, will screen with the lesser known Body + Soul. In the wake of war and strife often come the most potent horror stories; the nation of Japan ought to know. Ghosts and Monsters: Postwar Japanese Horror is a tasty blend of slow burns and hulking beasts. Highlights: Kuroneko, a samurai ghost story of a mother and daughter who vengefully swipe their claws at the men who doomed them, plus the original Godzilla, still remarkably dazzling after countless sequels and parodies.

Nitehawk (136 Metropolitan Ave, Brooklyn)
True to its name, Nitehawk has plenty to offer after dark. Midnight screenings are the meat of the month; can’t miss Bram Stoker’s Dracula, the intensely operatic and erotic adaptation featuring Gary Oldman, Winona Ryder, Anthony Hopkins, and Keanu Reeves that needs to be seen to be believed. Celebrate fifty years of Night of the Living Dead, the socially minded cheapo that kickstarted the modern zombie film and forever changed subtext in horror cinema. Its legacy can be found in the remake of The Fly, where you must be afraid of Jeff Goldblum (be very afraid of Jeff Goldblum). Don’t forget An American Werewolf in London, nor the original Halloween before the upcoming remake!

Brunch with The Addams Family, your pick of the classic Universal monsters, or even all of them at once in The Monster Squad. The latter is a lead-up to the warmhearted doc on the cult-classic, emphatically titled Wolfman’s Got Nards. That leads Nitehawk’s hosting of the Brooklyn Horror Film Festival, which also features Cam, Netflix/Blumhouse’s neon-tinted entry into this year’s Internet-themed trend, plus more religious scares with Welcome to Mercy. Go back to seedy, pre-Disney Times Square with The Deuce and The Brotherhood of Satan. Missed out on tickets to Spoons, Toons, and Booze, where you can get drunk on cereal in a place that, for once, isn’t your apartment? Mad Monster Party, the musical horror frolic from Rankin-Bass, is the warm nostalgic brunch event you need this month. Or, if you’re feeling fancy, kick off Halloween week with Ingmar Bergman’s chilly Hour of the Wolf, either as a precursor or chaser for A Night to Dismember, a midnight marathon of demonic thrills. It’s an experience where truly the strongest survive. Halloween night is a special treat: Hitchcock’s early silent film The Lodger, complete with live score from Morricone Youth.

Made in NY Media Center (30 John St, Brooklyn)
At the tip of DUMBO lies this sleek workspace, which also doubles as a state-of-the-art exhibition center. It will deliver a bulk of Brooklyn Horror Film Festival’s programming, especially the world premiere of Vinegar Syndrome’s new restoration of Blood Harvest, the Tiny Tim-fronted killer clown slasher that has long been underseen due to rights issues. Not to dismay its own namesake, a selection of shorts made in New York will compose the Home Invasion series.

Syndicated (40 Bogart St, Brooklyn)
Bushwick’s own dine-in cinema will host its own share of Brooklyn Horror Film Festival’s slate, notably the North American premiere of the Brazilian yuppie satire Cannibal Club. Chance the Rapper’s pizza-greased slasher Slice will be screened in case you missed it the first time around. No end in sight for your beloved classics—Beetlejuice, The Cabin in the Woods, John Carpenter’s The Thing, Ghostbusters, Scream, The Love Witch, The Craft, and I kid you not, a dozen screenings of Hocus Pocus. Also, Suspiria.

For a palate cleanser that still pleases macabre tastes, Caroline Golum’s A Feast of Man revives the friendship reunion flicks of the 80s and 90s with an inspired twist: everyone has to eat their newly deceased friend’s corpse. Once again, their Shriek Show marathon offers an affordable day of weird thrillers, and their weekly Blood Brunch offers a mystery treat that never disappoints. Just don’t forget to bring your own beer!

Videology (308 Bedford Ave, Brooklyn)
The video store-turned-bar/microcinema has plenty to offer in the department of movie-themed games and drinks. Ready your card for Stranger Things and Simpsons Bingo. While we wait for autumnal weather to present its lovely face, we can still bathe in some summery bloodfests: The Burning, Sleepaway Camp, and The Funhouse, all courtesy of Brooklyn Horror Film Festival. And hey, if you still haven’t seen the original Suspiria, there will be a costume party. Wax nostalgic with Halloweentown and Hocus Pocus, have campy fun with Death Becomes Her. If you’re feeling fancy (or just want to see Tom Hiddleston’s butt), stick around for the mega-chill Only Lovers Left Alive, complete with blood popsicle. Questionable? Hey, it’s Halloween; live a little.