We're coming up on Summer Blockbuster Season, which means area theaters will be hitting peak capacity almost every weekend, and you want to make sure you grab one of those precious prime seats. Honed over the course of a thousand movie-nights-out, here is the inside scoop on 19 NYC movie theaters, listed loosely from most to least comfortable and pleasant. 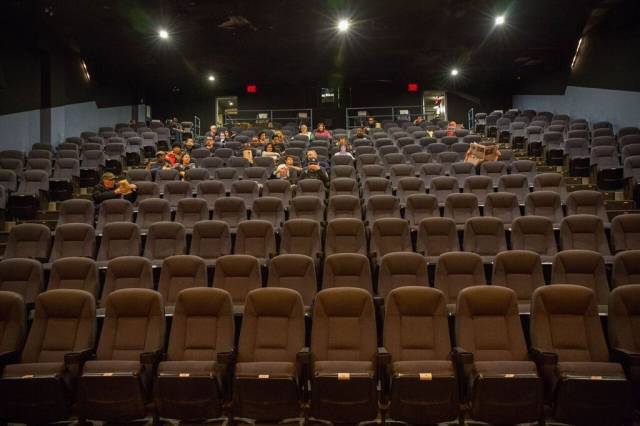 Theater 1 is the clear winner at the Sunshine: big screen and great sound, stadium seating, good sight lines from the aisle, any number of rows totally comfortable. Theaters 2 and 3, which are smaller but also have stadium seating, are decent. Theaters 4 and 5 are bitter disappointments—the seating alignment to the screen is totally awkward, and in 5 the ceiling has been known leak on top of my head when it rains.

IFC Center: Theater 3
The seating in the two largest theaters, 1 and 2, all broke almost immediately after this indie multiplex opened in 2005, making the small, screening-room-esque Theater 3 (those wide, plush seats!) the only truly comfortable room in which to watch a movie here. As always, you want to be in the tiered part, not down on the floor. Just last month, they finally renovated theaters 1 and 2, though theater 1 still has neck-strain and poor sight-line issues, and the best seats in 2 remain the last row, but I look forward to sampling more of 2's options, now that it's not a sad heap of trash chairs anymore. 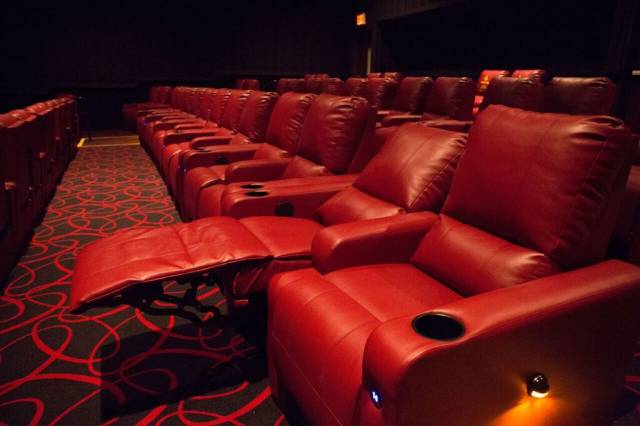 No question, the actual, physical seats in all three of these venues are spectacularly comfortable, especially if your legs are long enough to touch the floor with your butt all the way to the back, so you can switch off between reclining and sitting up. Except at Chelsea, where the seats are those big wide red ones, but they don't recline. And because all seats are reserved, best-seat strategy is just a matter of clicking around on a computer. Just make sure you read the layout correctly, so you don't, for example, buy third row seats to Star Wars instead of third row from the back.

But I do have mixed feelings about this trend, because not only are these tickets even more expensive than our usual, outrageous prices (and Loews 84 doesn't accept MoviePass anymore, so screw that), but the whole reserved-seating system also clearly rewards people willing/able to tack on buy-in-advance fees. To see Batman vs Superman in 3D at Loews 84, for example, now costs a whopping $25.09 each if you buy in advance. Does everything have to so driven by "luxury amenities" that now even going to the movies has become rich-people entertainment?

Regal Union Square: Theater 8
The big new releases here are always in either Theater 4 or Theater 8, and though the screen is a bit larger in 4 you definitely want 8, which has stadium seating (on the top half; arrive late and you'll be stuck in floor seating too far up front). And unlike some big screens, the aisle seats in 8 provide perfectly acceptable sight lines, so no need to squeeze your way into (and out of) the middle.

If you do wind up with tickets for something in the floor-seating, claustrophobic hell that is 4, the first three rows in the second section offer the least neck-straining, most immersive experience. The sound gets muffled if you sit too far back, under the low ceiling. And don't mess around with the balconies in either 4 or 8—they're too steep, and if the person in front of you leans forward, your view is totally blocked and you'll have to get into a fight.

Note: The theater just unveiled their exclusive 4DX seating in Theater 5, which features moving (and tickling!) seats, giant fans to simulate weather effects, and a "smell bar" that will release aromas appropriate to action on the screen. 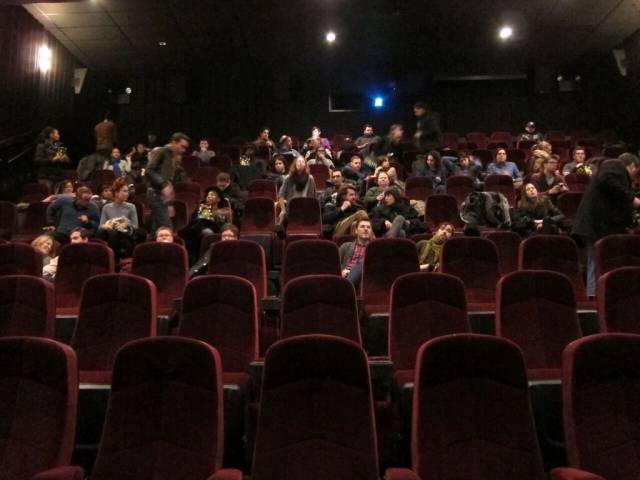 The still newish Williamsburg multiplex is the least expensive place in the city to catch big Hollywood movies ($9 on Tuesdays and Thursdays!), and they've eased up on their annoyingly aggressive bag-check policy of late. All six theaters have wide seats laid out stadium style, but you don't want to get here last minute for anything popular. Like most movie houses in town, they cram in capacity, and at least a third of the seats in any of the auditoriums are set too close to the front to be at all comfortable.

Regal Battery Park: Theaters 1 and 11
It's no secret that, despite a massive upgrade in nearby eating options over the past few years, Regal BPC still appears to be something of a secret. Blockbusters are routinely not sold-out even on opening weekend, and you'll have your pick of seats at most everything else, even arriving last minute. All 11 screens feature stadium seating, and though some of the prime-elevation aisle and middle seats are suffering noticeable wear and tear, with armrests that'll dig into your flesh, a bit of field testing will usually yield a comfortable place to put your butt (and arms) for the next two hours.

The two biggest screens are in Theaters 1 and 11, so that's the move if you have a choice, with 1 getting the nod because it means one less single-file escalator ride stuck behind people whose legs seem to have suddenly stopped working the moment they step on to the conveyance.

AMC Loews Lincoln Square: The two downstairs, or the Big One upstairs
The AMC on 68th Street names, rather than numbers, all of its theaters, and I can never remember which is which. What I can't forget is how junky most of the seating here is these days, all saggy and dirty and broken. But the two downstairs theaters at least have a stadium layout, and the screen in the main theater upstairs is still one of the largest in the city, so once you find a seat that isn't a piece of crap (generally, three or four in from the aisle have the least wear and tear) and NOT under the roof of the balcony, it's still a good place to watch a summer spectacle.

Angelika: Theaters 2 and 3
There isn't really a good seat in the entire place, but Theaters 2 and 3 seem like they have a slightly larger screen than 1 and 4. The key to minimizing your irritation and discomfort at the Angelika is to sit directly behind someone who's really short (if it's a full house) or slide in to the third seat in from the aisle, which is usually the least broken in the row. Avoid the small and decrepit Theaters 5 and 6 at all costs.

AMC Empire 25, Regal E-Walk Stadium 13, AMC Loews Kips Bay, AMC Loews 34th Street
These feel pretty interchangeable to me because I go only a couple of times a year to each, but I am always impressed about how well the two Times Square venues have held up. And the AMC 25 is ideal, layout-wise, if you want to spend a rainy day watching a buy-one-see-three rogue triple feature. 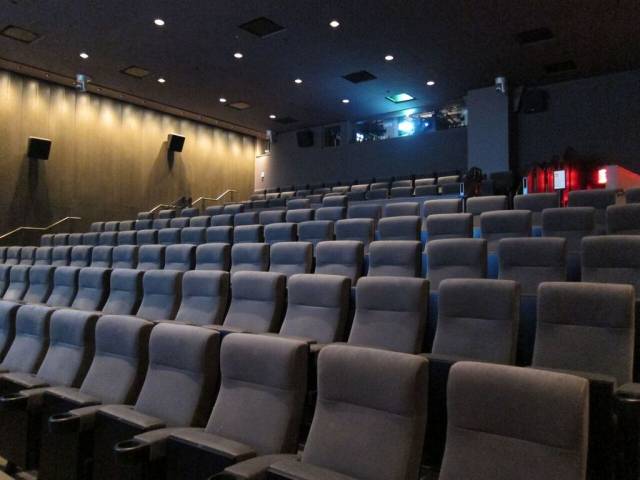 At first glance the two primary theaters here seem like a dream, with their wide, leathery seats, but given the tight confines even in the larger (and better) Francesca Beale, it's actually pretty difficult to find a spot that's the perfect distance from, and height in relation to, the screen. Last row in the lower section works better for me than anything in the seemingly more appealing upper tier, but you'll need to find your own bliss. Also, whatever the opposite of recliners are called, these are them. And unless you hate yourself, take a pass on the stiff benches and tiny screen of the Amphitheater, no matter how much cheaper the ticket price.

City Cinemas Village East
The large, ornately historic Theater 1 may seem like the bonanza at Village East, but the relationship between seats and screen is actually kind of off—for one thing, the screen itself isn't large enough for the room—and so it's hard to find the sweet spot. Better are the two upstairs theaters to the left of the lobby, with stadium seating and mid-size screens. A couple of the basement theaters are ludicrously small. Note: this is the Angelika's "sister cinema," the type of films you'll find here generally reflect that relationship, and overall it offers a more enjoyable movie-watching experience than its Houston Street sibling.

Film Forum
There's a certain type of New Yorker who loves to tell you how Film Forum is their favorite theater in the city, but I disagree. The seats here are hard and packed in way too tight, the screens tiny, that load-bearing column blocking your view in the first theater on the right... Yes, absolutely, I'm glad the 46-year-old institution still exists, and I always wind up here a few times a year, but this isn't the best place to watch a movie, from a comfort perspective.