A Guide To Following The 2014 World Cup

It's here: that terrifying month that comes once every four years. All your favorite neighborhood bars will be full. All your friends will be wearing weird jerseys and asking if you saw that ludicrous display last night. Somewhere, a child will gleefully grasp a vuvuzela, and no eardrum in a three-block radius will be spared.

It's the World Cup. You can't stop it. You can only hope to endure it as it kidnaps your city, transforming it into a dystopian sporting nightmare where your only chance of survival is to blend in.

We're here to help. To start our 2014 World Cup coverage (which we have dubbed "Worldcupist" because, well, what choice did we have?), here is enough information to maintain that minimal cultural relevancy the Times' Style section told us was essential. 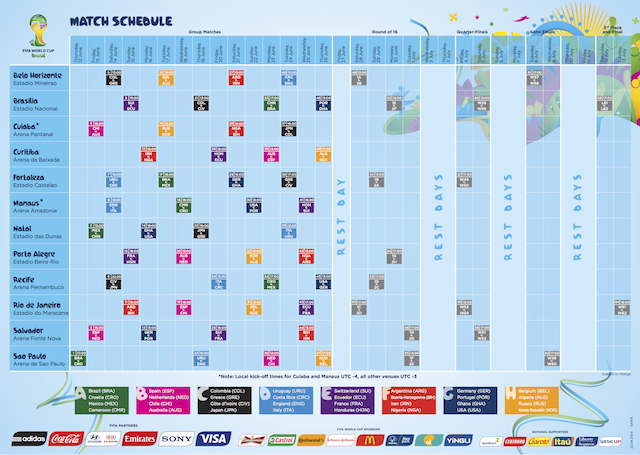 The full World Cup schedule is available on FIFA's website.

The World Cup involves 32 national teams, not clubs—so don't be that guy asking why Cristiano Ronaldo isn't playing for Real Madrid. All teams qualified over the last year through varying (and confusing) continental processes. From CONCACAF, the federation that covers North & Central America, the four qualifying teams were the USA, Costa Rica, Honduras, and Mexico, who only qualified thanks to the United States. You're welcome, Mexico!

Through a convoluted process involving pots, balls, and swirling, the 32 teams were drawn into eight groups of four for what's known as the "group stage", which starts this Thursday. The groups for 2014 are:

Each team plays the others in their group once. Wins are worth three points, draws are worth one. The two best teams from each group advance to the knockout round, which is like every NCAA tournament you've ever feigned interest in. Single elimination, no ties - 30 minutes of extra time (no "golden goal") and possibly penalty kicks. Three rounds of knockout narrow the field from 16 to 2 teams for the championship match on July 13th.

Know The Not Quite Household Names

Even if you're tone deaf to soccer, you've probably heard of names like Lionel Messi, Cristiano Ronaldo, or Landon Donovan. But no one's going to give you any hipster cred for knowing about them. So here's a few key players that are just below the mainstream US radar, perfect for brushing up on:

Sergio Agüero: The Argentine forward is a mainstay at Manchester City, and holds the best goals per minute rate in Premier League history. His ability to find the back of the net may well be the best at the tournament. But when it comes to the national team, he's overshadowed by the huge popularity (and high expectations) of one Lionel Messi. If Argentina is going to find their first World Cup since 1986, Agüero will have to play a role.

Michael Bradley: Landon Donovan is not going to Brazil, so you're going to have to find another American to pin your hopes on. And while Clint Dempsey and Jozy Altidore will (hopefully) be providing the goals, Michael Bradley will be battling for the midfield. Bradley, son of former USMNT coach Bob Bradley, is a strong box-to-box midfielder. He is happy to do what the game asks of him, whether that's winning the ball on defense or feeding the attackers thanks to his excellent vision.

Manuel Neuer: Germany is best known for their threatening attacking prowess, but don't discount the man anchoring the back line. Neuer may well be the best goalkeeper in the world, posting a 0.58 goals against average for Bayern Munich last season with 15 shutouts. He also plays a unique sweeper role, frequently coming out of his box to help Germany play a high line. Germany will live and die in the tournament by Neuer's defensive abilities.

Daniel Sturridge: Wayne Rooney who? The hottest English striker last year was 24-year-old Sturridge, who partnered with Uruguay's Luis Suarez to lift Liverpool to their highest finish since 1990. He's in perhaps the best form of the English squad, and yet it's not clear if he'll start. It's little wonder why English fans tend to be so self-loathing!

Know How To Watch The Matches 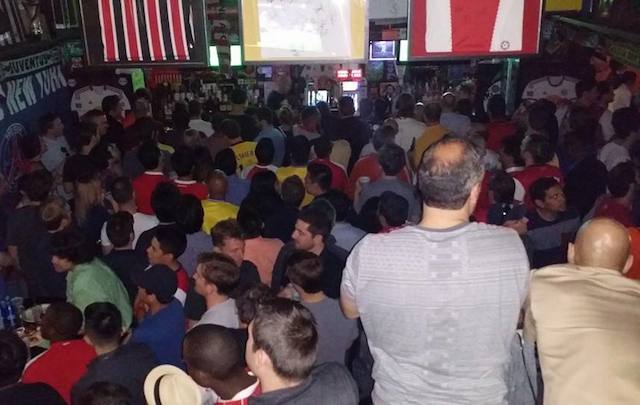 Expect soccer bars, like NYC's Football Factory, to be packed.

With Brazil only an hour ahead of Eastern Time, this year's World Cup is in the perfect afternoon timeframe for the USA. Most of the matches will fall between 1:00 PM and 7:00 PM Eastern Time. A full schedule is available practically everywhere, but we're partial to WhoScored for their excellent statistics.

All 64 matches will be on either ABC, ESPN, or ESPN2 in English. WatchESPN is your best option if you're stuck at work, but expect your IT staff to block it when your office network slows to a crawl. The Univision family will carry the games in Spanish.

But who wants to watch sports alone? Practically every sports bar in the country will be showing the games, so head to your usual watering hole and grab a beer. Keep an eye over the next few days for a guide to World Cup venues and watch parties on each Istaverse site.

Know that FIFA Is Terrible

If anything unites soccer fans around the world, it's the knowledge that FIFA - soccer's organizing body - is terrible. It proposes laughable solutions to racism. Its president routinely demeans women. They just became embroiled not just in another match fixing scandal, but one about bribery for the 2022 World Cup bid.

John Oliver encapsulated everything that's wrong with FIFA with this fantastic segment on his show last night:

Know That Brazil May Well Descend Into Anarchy

FIFA being terrible doesn't let Brazil off the hook for being ill-prepared for the World Cup. With many of the twelve host stadiums still not ready, a now-underway transit worker strike, and anarchists promising to riot, Brazil 2014 could make the Olympics in Sochi look well-organized.

Know That We're Here For You

Most mornings throughout the tournament, look for Worldcupist Daily, a roundup of everything you need to know about the tournament. For as long as the US remains in the tournament, we'll be bringing you special in-depth coverage of the US Men's team before and after their matches from Charlie Boehm, who will be traveling with the team.

And if you need constant, dizzying, 24/7 World Cup coverage, follow Dan, Pablo, and Charlie on Twitter, as none of them will be able to shut up for the next month.

#fifa
#soccer
#world cup 2014
#worldcupist
#original
Do you know the scoop? Comment below or Send us a Tip