A Guide To Experiencing The Legendary Dyker Heights Christmas Lights

Every December, the Dyker Heights community goes full Clark Griswold and lights up the neighborhood with displays that will keep Con Ed in business for years to come. The switches have officially been turned on for the season, and this weekend drew hundreds to the area to witness the "twinklin' freakin' wonderland." I was one of them, and thought I'd share a few things you should know if you plan to venture out there:

Where is Dyker Heights? Located between Bensonhurst and Bay Ridge, with the Verrazano-Narrows in the distance, Dyker Heights is in Brooklyn. You know Brooklyn... but it wouldn't hurt for you to know more of Brooklyn. Beyond the brunches and branding, there are nice little communities that have yet to be completely choked by gentrification.

How do I get there? My journey began at Fawkner on Smith Street, where I met two friends and had two Old Fashioneds (which the bar calls "Roosevelts"). We hailed a cab around 6:30 p.m., and whoooosh we were there in like 20 minutes, maybe less. On the way home we got an UberX, which took just three minutes to arrive (if you do this, first be sure to leave the crowded areas and make your way to a nice clear intersection). Round trip, the grand total (including tipping the Uber driver, which you don't have to do) was $51, or a nice even $17/per person.

There's also mass transit—the closest train is the D at 18th Avenue, but note you'll have a 20 minute walk up and down some hills to and from.

If neither of those work for you, maybe you are a bus tour type of person? There's a $50 option that will bring you there on a bus, and lasts around 3.5 hours.

Where are the lights, exactly? The best lights are on 11th Avenue to 13th Avenue and from 83rd to 86th Street. Not every house is lit up—they range from dark to subtle to Christmas AF, and the bigger displays (like above) will have crowds and lines so you can take photos.

Lines to take photos with residential Christmas displays? Can I... drink? You can bring a thermos filled with whiskey, no one will stop you.

Are there bathrooms? The lights are in a residential area, but you will find local businesses nearby on 7th Avenue and other surrounding commercial streets—just be sure to buy something in exchange for using their bathrooms.

Is there a display for everyone—like, will my uncle who is a member of the NRA enjoy this? Yes :( 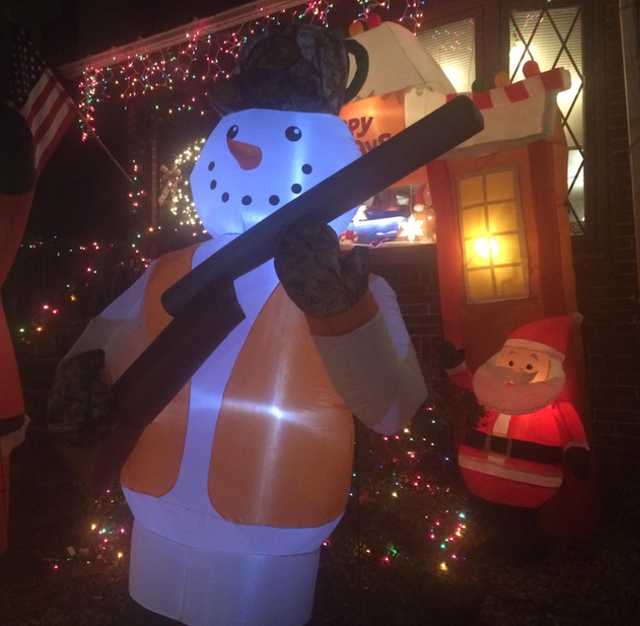 I'm really into Star Wars.... Say no more, there's a garage in the area just for you.

Can I just watch it on the internet? Sure.