We love a good conspiracy theory, and Reddit gets an A+ for delivering this one. It all starts with a Tweet from a woman whose father took a photo of Sharon Tate in 1967 wearing a white tee with a red star on it—the photo appeared in Esquire magazine. And in this week's episode of Mad Men Megan Draper was shown wearing the same ensemble, which the show's designer declared was "no coincidence"—SO WHAT DOES IT MEAN?

Currently it's June 1968 on the show, and in real life Sharon Tate would be alive for about one more year—while the Manson Family would have finally just left the Beach Boys' Dennis Wilson's home and established a base camp at Spahn's Movie Ranch.

Tate had a few similarities to Megan Draper. In the 1960s, she was an up and coming actress with some smaller television roles, just as Megan is making her way up in the soap opera world. Tate lost her baby when she lost her life to the Manson Family, and Megan just suffered a miscarriage on the show. And both were young women married to older, powerful men. In fact, some theorists just think the shirt is a reference to how both of those men were unfaithful to them—"We have a good arrangement. Roman [Polanski] lies to me and I pretend to believe him," Tate once said.

And then there is this season's promo poster, which was very important to showrunner Matthew Weiner. In the poster, two Don Drapers are shown—one walking towards and one walking away from a crime scene. The one walking away is holding the hand of a hidden bride... it's also worth noting that this week's episode was called “The Better Half”: 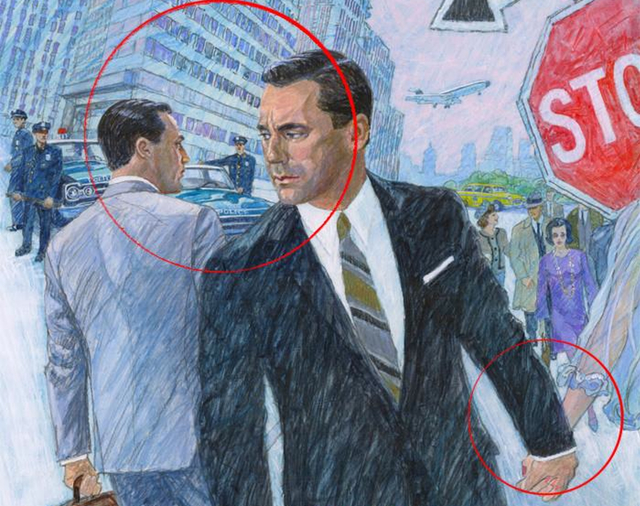 Uproxx has organized the Redditors theories nicely, and notes the following:

"You could spin a lot of theories about what seems like the impending murder of Megan Draper, from it being another break-in (foreshadowed by Grandma Ida), to a case of mistaken identity (foreshadowed by Peggy’s stabbing of Abe), to Don being the murderer (there is a Draper walking to and from the crime scene in the poster), to BOB BENSON because OF COURSE BOB BENSON. Or maybe it’s Dr. Rosen, who finds out about Draper’s affair with Sylvia, who kills Megan after mistaking her for Draper."

Though maybe someone will get pushed down the stairs, all soap-opera style? Megan mentioned her character may be pushing someone down the stairs earlier this season (Don quips, “I'll walk behind you on the stairs"), and in the last episode there's the scene where Roger's daughter tells him not to let his grandson on the stairs. Anyway, there is a fair amount of murder in the air (stairs?!?!) this season, which was happening last season with suicide... and you know what happened there.

#mad men
#megan draper
#murder
#sharon tate
Do you know the scoop? Comment below or Send us a Tip
A new Gothamist is coming! We’ve moved comments over to our beta site. Click here to join the conversation and get a preview of our new website.