That legendary production has been faithfully remounted by Twist on the occasion of its 20th anniversary, this time with an even bigger fish tank, as well as live musical accompaniment by pianist Christopher O’Riley. Reviewing the current revival of Symphonie Fantastique, Brantley wrote, "I found myself slipping into a fugue of irrational, unadulterated joy." The production has been extended through July 15th, and Gothamist recently spoke with Twist about what makes his mysterious, aquatic puppet show show so enduring.

I saw Symphonie Fantastique for the first time a couple of weeks ago and loved it. It was almost like a psychedelic experience. I felt transported. That's the best reaction. Thank you. We used to do like late night shows, back 20 years ago. And it was totally a psychedelic experience. It was like Laserium, so people would come, you know, a little bit high and stuff. But I love it that you can do that without taking any substances, and you still have that feeling.

How did this idea come to you? Were you struck with a vision? As someone who doesn't do anything with puppets, it's just hard to imagine how you would even conceive of this. Well, I wanted to do something abstract. Most puppets are totally representational. Take the fabric, and paint the wood, and you try and make it look like a person, or an animal, or something.

And, I just was like, "What would a show be like, that just used the sort of pure..." If you strip it down. Like abstract painting, like Kandinsky. What would it be like to strip everything down to just pure form and composition?

You created the show with Berlioz in mind, right? Well, at first I didn't. I used to perform a lot, in nightclubs and cabarets, and I did a short form thing. Yma Sumac actually, was the music. It was a really poppy, Latiny, wild sort of song. And I used feathers, and curtains that opened, and a balloon, and silly string, you know? I just used all this stuff to make this little space come alive to the music.

And it was great. I loved it. And I thought, "I want to do something that's a full length show, like this." And I knew that I would want to do it with music. I kind of stumbled across Symphony Fantastique [the Berlioz symphony]. I knew it from like, High School. And even my parents had it in their record collection when I was little. So I was sort of familiar with it. Then I saw it in a record bin in the West Village. I saw an album with a very psychedelic cover, and I bought it for like a dollar, and came home and listened to it, and was completely transported by it.

This was in 1996? It was probably '96, or even '95. Probably 1995. And then I started to think, "Yeah. I want to do this piece." It's an hour long. It's super dramatic. It's French. I used to live in France. It's romantic. It has this wonderful title. So, I was like, "This is the piece." I had found an aquarium on the street, a little broken aquarium. And I brought it into my studio in the West Village and fixed the crack in it and started playing. Just putting fabric on a coat hanger. And would just sort of trip out on it.

And, I thought, "This would be so great. Let's do that." And actually at first honestly, I thought that I was only gonna do the first movement [of the symphony] like this. There are five movements. I thought one of the movements was gonna be under water, and that the other ones were gonna be done in different ways. And then the water was so compelling. There was such great stuff in it. And also, it's very challenging to work with water. So, it doesn't really work to just be like, "And I'm gonna roll in this giant tank, just for one part of the show."

How often do you change the water, by the way? I do it for every show.

Wow. So then you flush it all out, and add fresh water? Yeah.

And why is that? Well, it just... It gets filthy, as we're working with it. You put all that stuff in it. People are using it. There's five people whose arms are in it, and they get wet. And, you put stuff in it, and you take it out. And, it just starts to accumulate fibers and wetness. I mean, skin cells. And then we also put ink in, and stuff at the end.

So for the show to really be the best that it can be, it needs to be clear. And, we have been in situations like in California during a drought. And we made a huge effort to filter the water. But it's an enormous effort, and it means that there are certain things that we can't do. 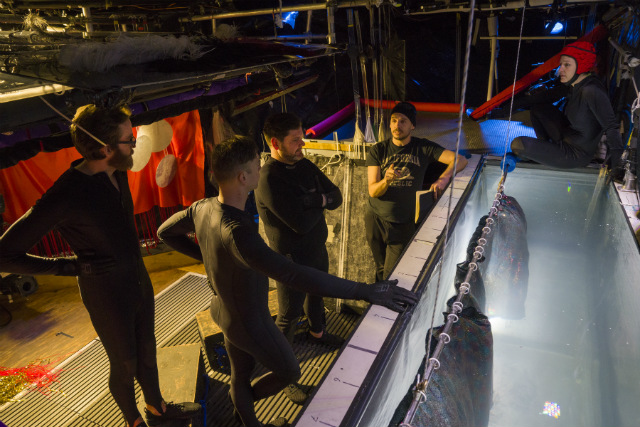 Has this revival changed at all, from when you locked the original version? The original version was downstairs at HERE, in another theater which is a little bit smaller. The show inaugurated that space, 20 years ago. And so the version of this show was a little bit smaller, and the 1,000 gallons was 500 gallons. So, that means that the viewing window that is now five feet across, was about three feet across.

So, it was a little bit smaller. It's still small, right? I mean, it's still a small window that you're looking at essentially. And I made a second version the year after I opened it in New York. It actually ran in New York, for almost two years.

It is slightly changed from what people saw 20 years ago, because it's a little bigger. There are a few things that we added. But, it's really essentially the same. It's not a practical, or easy show to [produce]. It's a lot to get it up. So when you get it up, it's just getting it up is enough of a feat. But I wanted to change it actually. I thought, "Oh, gosh. Like, I should redo it, and remake it."

And then I just realized it's so tightly woven together, that it's quite hard to change anything. Like the way the choreography and the way everything sits back stage. That material that I used to buy on Canal street, well that store closed 10 years ago. And I can't find it anymore. So it became a challenge, to try and keep it the same. But it is basically the same show. The big difference is of course, is having the live music. Because when we did it 20 years ago, we used a recording.

And the Puppeteers are wearing wet suits through all this, right? They wear wet suits. They don't get in the tank, but they put their arms in and sometimes there's moments where they actually put a leg in, to push something. So they mostly get wet, from being splashed on so much, pulling stuff out over themselves, and moving so fast with wet objects, that they just get wet all over. There are parts where they are kind of suspended in harnesses above the tank, and they climb in and out of them.

How do you articulate what you're going for with this piece? What do you hope the impact is on the audience member? Essentially, it's a puppet show. It's the essential spirit of a puppet show. It's a show. Which means there are people who gather and watch. And what they're seeing is the phenomenon, the essence of puppetry: things coming to life. We have a sense of life, that these things are alive. And, I know people can't help but make associations and think, "It looks like a jellyfish," or, "It looks like a pizza," or, "It looks like a bunch of cigarettes." Or whatever they think.

And people secretly see faces and stuff. But I try to avoid it looking like things that were identifiable things. The fundamental thing is there is a piece of fabric that's in the water, that's weightless, and that's moving, and that's sort of a dancer. And you have a sense of spirit that is there, in just a totally common material.

I guess the essential thing is what I think is the essence of a puppet show: the inanimate coming to life, and feeling spirit. You feel something is alive in front of you, and marveling at that, how simple that is, to just marvel at, "Wow! It feels like it's alive." And you know that it's not. That is what I think is exciting in puppetry. It's kind of a profound thing, because we're alive. And when you see something that's not alive, and it looks like it's alive, there's some sort of thrill in that.

And then also, I just like to entertain. You know? I just like to make something that's fun and pretty, and impressive. I'm excited for this show in the summer, actually. When we did the show originally, we opened it up in June. So, it really was a summertime show. It's not a long show. So, you can make an evening of it.

And it's wet. There's something about it that I think fits the summer really well.

#basil twist
#interview
#puppetry
#symphonie fantastique
#original
Do you know the scoop? Comment below or Send us a Tip
A new Gothamist is coming! We’ve moved comments over to our beta site. Click here to join the conversation and get a preview of our new website.