A Close Look At The Germs Crawling Around The Subway

We were told this week that our generally robust immune systems mean subway cars are "not something to be scared of," provided you do not make out with all the seats (though perhaps you could!) But how many microscopic little germs are wriggling around our underground surfaces, just waiting to do battle with your T cells? Funny you should ask...

Weill Cornell Medical College scientist Dr. Chris Mason put a research team to the task during the summer of 2013, swabbing turnstiles, subway poles, kiosks, benches, and other human-penetrated surfaces in all 466 subway stations in the city as part of their PathoMap Project [pdf], in addition to samples from the Gowanus Canal, public parks and a closed subway station. And they found quite a few signs of life—15,152 types of DNA, in fact—nearly half of which they identified as bacteria. Shocking!

Mason and his crew did manage to find some scary stuff, with E. coli, Staphylococcus aureus (skin infections, respiratory disease and food poisoning), Bacillus anthracis (anthrax), and even Yersinia pestis, which is associated with the bubonic plague, popping up in some swabs. Nearly all the stations harbored an antibiotic resistant bacteria called Stenotrophomonas maltophilia, one that often causes respiratory infections in hospitals. 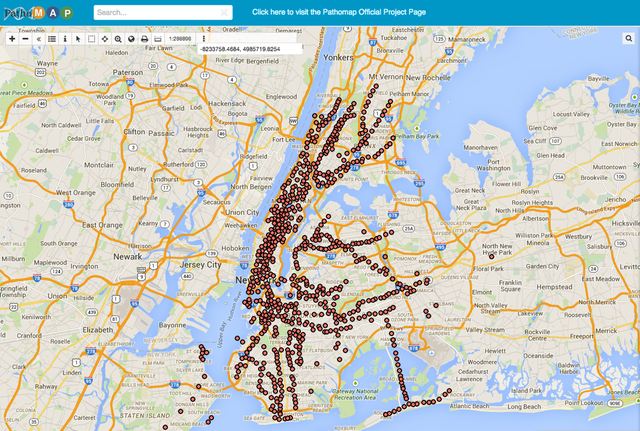 But before you burn the skin off your hands, know that the majority of the bacteria the PathoMap team found was not associated with any human diseases, and appeared to be harmless. More importantly, Mason's team points out that even the scariest germs (AGAIN, THE BUBONIC PLAGUE) are probably not getting New Yorkers sick.

"[T]here has not been a single reported case of Y. pestis in New York City since our collections began, indicating that these low-level pathogens, if truly present, are not likely active and causing disease in people," the study notes.

The PathoMap team found more than just evil soul-sucking bacteria—swabs revealed everything from mozzarella cheese to bits of leftover chicken, likely left on people's fingertips post-meal. As for slightly less tasty animal life, they also found DNA from mice, lice, fish and rats on trains and in stations, not that the latter should come as a surprise.

As for which subway stations had the most germs, the G train's Myrtle-Willoughby stop boasted 95 different kinds of bacteria, while the South Ferry station (which was flooded during Hurricane Sandy) offered up DNA strains more commonly found in Antarctica, of all places. You can take a look at this eerie heat map for better visuals, if you care to torture yourself, or play with this fun interactive one to get a glimpse of the swab sites.

So the question remains: should we be terrified of touching things on the subway? As long as you've got a healthy immune system, probably not, Mason says. "Wash your hands and don't walk around with a gaping wound," he told us at an event this week. "You wouldn't want to lick all the poles, even though you'd probably be fine."

#chris mason
#subway
#subway germs
#subway swabbing
#original
Do you know the scoop? Comment below or Send us a Tip