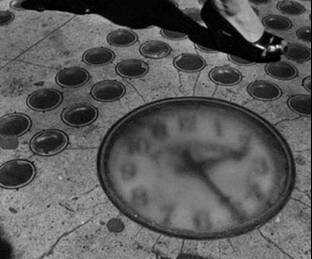 Photographer Ida Wyman captured a photo of the clock as it looked in 1947.

In 1899, jeweler William Barthman installed a clock of his own design in the sidewalk outside of his jewelry store on Maiden Lane, in hopes of attracting more customers—it even lit up at night. The intersection of Maiden Lane and Broadway was the center of the city's jewelry district at the time, and got a lot of foot traffic, so the clock instantly captured plenty of attention... and a lot of feet upon its face.

Frank Homm had helped Barthman with the technical aspect of the clock, and the upkeep (subway vibrations were a problem), so when he died in 1917 the clock stopped functioning as well, eventually not telling the accurate time—"sometimes the Barthmans would have to go out and hide their shame with a piece of cardboard." The clock was eventually replaced (per Hodinkee, that first happened in the the 1940s).

According to a NY Times piece from the 1990s, "some kind of clock has been there 'a minimum of 80 to 90 years'—including a wooden model, an electrical one and the current quartz version." They also note that "the works for the Barthman clock were made by Cartier."

Get a look behind the clock here—where there's a photo showing the underground space where it gets maintained.

#clock
#flashback
#history
#jeweler
#william barthman
#original
Do you know the scoop? Comment below or Send us a Tip