A Civil Liberties Lawyer Explains Why "Hoverboards" Are Illegal In NYC

Yesterday we published an article declaring that your "hoverboard" is illegal in NYC. The 26th Precinct of the NYPD tweeted out this fact on Monday, referencing the NYC Admin. Code 19-176.2*. That code, we discovered, actually seemed to declare that hoverboards were legal. This caused some confusion, but we turned to the NYC Dept. of Transportation, who confirmed with us that these self-propelling devices were in fact illegal in New York City. They referenced NY State Law, which declares "hoverboards" to be a motor vehicle that you cannot register.

When it comes to new technology, we enter a window of time that is confusing for everyone. Most likely not every NYPD officer knows that "hoverboards" are illegal, and they certainly don't know why, as we saw with that since-deleted tweet. So until the language of the law specifically states that "hoverboards" are illegal, knowledge and enforcement of that law is likely to be lacking.

For the legal take on this so far, we turned to attorney Gideon Orion Oliver: 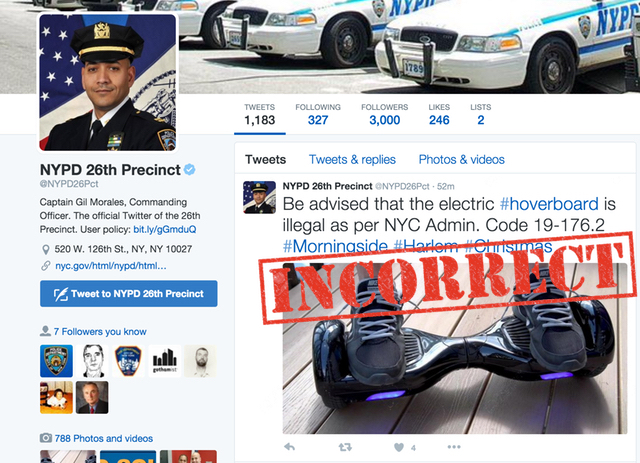 Hoverboards are illegal in NYC, but they aren't illegal because of this code.

Your "hoverboard" is illegal, but it's not illegal under the code the NYPD is referencing.

As you correctly pointed out, “motorized scooters” as defined by New York City Administrative Code 19-176.2 must have handlebars. "So there is simply no way a “hoverboard” that has no handlebars could fall within this provision’s legitimate sweep." Also, "electric powered devices not capable of exceeding fifteen miles per hour" or "electric personal assistive mobility devices" defined as self-balancing, two non-tandem wheeled devices designed to transport one person by means of an electric propulsion system” are categorically excluded from the “motorized scooter” class of vehicles. So, even a “hoverboard” with handlebars incapable of exceeding 15 miles per hour could not be prohibited as a “motorized scooter.”

What if an officer tries to ticket you and references Code 19-176.2?

Although it’s great the NYPD precinct deleted the tweet you reported about, if there was a directive for NYPD officers to go out and write summonses to or make collars of “hoverboard” operators citing NYCAC 19-176.2 either at or beyond the precinct level, that won’t do much good.

Any ticket or other legal process issued to a person for operating a “hoverboard” that is NOT within the sweep of NYCAC 19-176.2, for violating NYCAC 19-176.2, is legally insufficient and should be dismissed, either by the court’s screening processes in the summons courts or by the Assistant District Attorneys in the local prosecutors’ offices who see cases where police have written up cases recommending NYCAC 19-176.2 violations for accused “hoverboard” operators. Emphasis on the “should be.” That frequently does not happen.

I would encourage people who are detained in connection with hoverboard operation to do what every other person who is detained by the police should do: Ask if they are free to leave and if so, leave, and if not, state that they wish to remain silent and to consult with an attorney, and that they do not consent to any search.

So WHY is my "hoverboard" illegal in NYC?

This afternoon, I called NYS Department of Motor Vehicles (“NYSDMV”) and spoke with someone from its Technical Assistance Unit to understand NYSDMV’s position about whether “hoverboards” can be registered or not.

NYSDMV’s position is that these vehicles are likely “Electric personal assist mobility devices.” NYS Vehicle and Traffic Law 114-d defines “Electric personal assist mobility device” as “Every self-balancing, two non-tandem wheeled device designed to transport one person by means of an electric propulsion system with an average output of not more than seven hundred fifty watts (one horsepower), and the maximum speed of which on a paved level surface, when propelled solely by its electric propulsion system while ridden by an operator weighing one hundred seventy pounds, is less than twelve and one-half miles per hour.”

NYS VTL 125 generally defines “motor vehicles” as "Every vehicle operated or driven upon a public highway which is propelled by any power other than muscular power.” However, VTL 125 specifically excludes some classes of vehicles from the definition of “motor vehicles.” Under VTL 126(a-1), “electrical personal assistive mobility devices operated outside a city with a population of one million or more” are not considered motor vehicles.

However, in NYC, because the city population is greater than one million, NYSDMV considers “hoverboards” that meet the definition of “electric personal assist mobility devices” the same as motor vehicles.

Based on that interpretation, it would be illegal to operate a hoverboard in NYC without a valid license to drive a motor vehicle.

Beyond that, the motor vehicle would need to be registered by NYSDMV (which NYSDMV will not do), inspected, insured, and otherwise treated as, and subject to regulation like, any other motor vehicle. A person who operates a hoverboard in NYC (or any other NYS city with a population greater than a million) would be subject to arrest and prosecution for myriad NYS VTL violations, including, but not limited to, driving a motor vehicle without valid registration or insurance.

It's possible that one day Big Hoverboard will lobby against these laws, and things will change, but currently the NYPD has a right to ticket you for riding your "hoverboard." Oliver points out that maybe this should not be the case, however—"I can’t imagine we want a City where the NYPD is ticketing and/or arresting people for VTL violations and crimes for 'hoverboard' operations—the City needs a better enforcement strategy and ultimately a real regulatory scheme that makes sense. And in the meantime, the NYPD’s enforcement actions, if any, targeting 'hoverboard' operators must be fair and even-handed—unlike, for example, the NYPD’s selective enforcement of NYCAC 19-176 prohibitions (against bicycling on the sidewalk)."

The NYSDMV jargon currently makes hoverboards illegal just about everywhere—you can buy them, you can have them, but you cannot operate them. This includes on NYC sidewalks, streets, and parks... but you probably won't have any run-ins with the law if you use them in a private space for boy band dance practice.

*Updated note: In 2013 the City Council revised NYCAC 19-176.2(a) to omit everything in that subsection after "for use by disabled persons." but the fact remains that because these devices do not have handlebars NYCAC 19-176.2 cannot apply to them.

#explainer
#hoverboards
#illegal
#law
#original
Do you know the scoop? Comment below or Send us a Tip