A Chat Between Mamie Gummer and Henry Wolfe

This Friday both Mamie Gummer and Henry Wolfe Gummer will steal a bit of the spotlight from their mother Meryl Streep; the former hitting the big screen in Taking Woodstock, and the latter taking the stage at Joe's Pub (tickets). You may have already heard one of his songs, "Stop the Train," in the film Julie & Julia.

The two talented siblings chatted with each other recently and let us eavesdrop. Listen in below as they discuss nearly visiting Neverland Ranch, their favorite plays, concerts, and of course, a creepy primate house in Spokane.

Henry: Maaaaaamie....?
Mamie: Eh hem. Yes? You ready to play hard ball?
H: I'm keeping you honest.
M: Go ahead.
H: Maybe we should put a time limit on this?
M: Like for each question? Like jeopardy? Or to the whole thing so we can get on with our lives? I for one have nothing to do—it's this or online shopping...
H: I meant for the whole thing so we can keep our questions focused...
M: Okay.
H: What are you shopping for?
M: Jewelry. Because I know it will fit. I should also note that I am listening to your record. I'm calling it a "record" because that's classy...
H: Is it good music to shop to?
M: Yeah. Sure.
H: So what is our time limit again?
M: I don't know. What do you want it to be? 20 minutes?
H: That's good. So, did you go see a movie yesterday?
M: I did. The Time Traveler's Wife. Ugh. Stupid movie made me cry. Mediocre AND manipulative.
H: Like Top 40 pop music.
M: Totally. It Coldplay-ed me
H: Nice one.
M: Thank you. Print it.

H: You saw Coldplay in concert and loved it if I remember correctly.
M: Damn you with your background knowledge. Yes, I did. In Hartford, CT no less.
H: I saw Rusted Root there...
M: HA! I saw Dave Mathews Band (twice) PS—I think it was you who first turned me onto Coldplay, with "Yellow." No?
H: That's a great song.
M: It's usually you who's turning me on to good music.
H: Yes, obviously I have impeccable taste. What is the best concert you've ever seen?
M: Wow. You know, one of my earliest memories is of that Michael Jackson concert we saw in Australia. Do you remember that? I must have been 5.
H: I remember after the concert we got to go backstage and take turns sitting on Michael's lap like he was Santa Claus.
M: Ahhh! Weren't you invited the The Ranch?
H: Yeah, I begged mom and dad but they wouldn't let me.
M: Ha! Good.
H: R.I.P. King of Pop.
M: Totally. Favorite concert though? Um... other than anytime you perform?
H: Ugh.
M: I'm serious! I know how embarrassing it is to see your sisters front and center at your show, but man! It's the best. And those early Bravo Silva shows—I'd just moved to the big city. I thought it was the coolest thing ever. And it probably was.
H: Probably?!

M: But other than that, I think that Neil Young show we saw with Dad in LA was pretty incredible.
H: Yes! One of the best ever. A solo show at the Wiltern in 99 or something.
M: It was just him and 7 guitars. Okay, my turn to question ask. What was the best PLAY you ever saw?
H: Other than every play you've ever been in you mean?
M: Yup! That'swhati'mtalkinabout. Yes, obviously other than all of those.
H: I saw Antigone at the outdoor theater at Epiduras in Greece, which is like 2500 years old and still in such good condition that they have summer festivals there. The theater sits thousands of people and supposedly the acoustics are so good that you can hear a coin drop onstage from the farthest row back... It was really amazing.
M: That's incredible. When was that?
H: It was in 2002. Remember I did the backpacking thing after college?
M: Oh yeah. I remember. I remember wanting to do the same when I graduated but was not allowed on the grounds that I was "a girl." Yeah, I remember you went on and on about Croatia.
H: Yeah, that was incredible. But it was the most romantic place I'd ever been, and I was traveling solo. So I got the blues...
M: Traveling solo can be a little sad at times—even in the least romantic places like Spokane.
H: I see. Tell me Mamie, what brings you to Spokane?
M: I am filming a film. A "genre" film.
H: You're the director?
M: Nope. John Carpenter is the director. Can you guess the genre?
H: Horror!!!
M: Yes, Henry. What is Horror is correct. It's called the Ward. I get to play "crazy." It's been actually really fun and John is so calm and good humored about everything. It's quite pleasant.
H: Does it get under your skin at all? It seems like living in that world every day could affect you subconsciously. Like you'd get nightmares or something...?
M: Not at all. And I am a total wimp. I can't ever watch these kinds of movies. I don't even know if I'll be able to sit through this without covering my eyes. But working on it, seeing how it's all done, is really just amusing. The girl playing the ghoul that torments us—her name is Gillian and she is incredibly sweet—it takes her 3 hours to get into makeup. So knowing all that—it's hard to be affected by it really. The only thing that is truly creepy is our location. That is for real. There is no facade. We're filming in an honest-to-god insane asylum that is in part still operational. And it's been there for about 100 years—when it opened it was a "school for the feeble minded." And I told you about the primate house, right?
H: Yeah. But explain to our readers...
M: Well, first of all, the "campus" is huge. They've lost a lot of their state funding and have shut most of it down but in its day it had its own zip code and fire department and dairy. Anyway there was this one building where they housed the really crazy crazies in rooms that were the size of closets—literally. Incredibly depressing. And they did this until the 1960s when the patients staged some sort of riot—and the building was shut down until, that is, they turned it into a primate testing facility and now it's fallen into total disrepair. Anyway, that's where I go everyday.
H: Creepytown... We are now way over our time limit.
M: Yup. Sorry I went on about the primate house. That's probably not necessary nor does it pertain to anything.
H: That's okay. It's interesting!
M: It's a ghost story—apparently people like ghost stories. Hopefully anyway—or I've been wasting some time here. 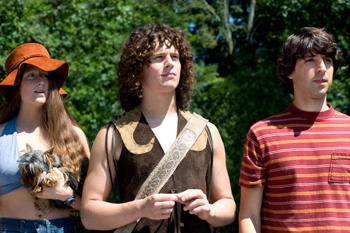 H: Who do you play in Taking Woodstock?
M: Tisha is her name. She's got long dark hair and carries a yorkie.
H: Is she inspired by a real person?
M: She was one of the festival organizers. Part of "Woodstock Productions."
H: Did you meet her?
M: Yep. She's a real live person. But you know—they all ended up suing each other in real life so she wasn't around the set at all...
H: Does she still carry a yorkie?
M: Not that I saw.
H: Do you think Woodstock deserves all the attention? It seems a little bit relentless to me...
M: Ummm... I think it's good to recall a time and a place where people were trusting and decent to one another but I also can't help thinking that there is some capital motivating the whole thing. Someone trying to "make a buck." You should see all the memorabilia tacked up in Barnes & Nobles. But I don't know. I'm sure I benefit somehow from the promotion so I should shut my mouth.
H: I was gonna say... um, what are we doing here?
M: But it was great to exist in that world for 3-5 weeks or however long I was on that shoot. It was really sweet. Like, tender...
H: And then everybody sued each other.
M: Right. And here we are... Anyway.
H: Anyway... This was fun. Love you!
M: K, bye! Love you too!