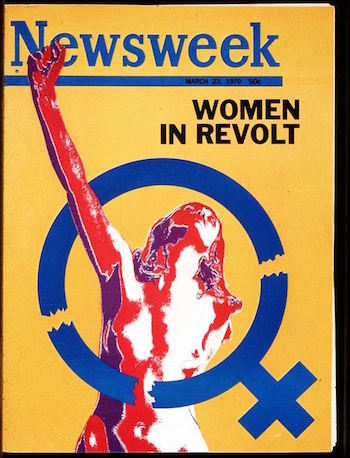 Amazon's newest series, Good Girls Revolt, is based on the book of the same name by Lynn Povich, who was part of the real life events in 1970 that challenged and defied the patriarchal world of journalism.

The show focuses on Newsweek's newsroom at the time, where women were present, but not as writers. Instead, they were known as "the dollies," researching stories and often times being the ones who not only gathered information, tracked down and spoke to sources, but shaped and helped write the articles, for which they received no credit. Each "dollie" was paired with a male writer, who got the byline.

The show introduces the viewer to the men and women of the Newsweek newsroom—including a young Nora Ephron (played by Grace Gummer)—as well as the women of New York City who were beginning to revolt against the patriarchy. Namely, Eleanor Holmes Norton (Joy Bryant), now a member of Congress, and at the time an American Civil Liberties Union attorney. The women would gather and recruit others to join forces—from TIME, which covered the story as it was unfolding back then:

They began gathering ranks, recruiting others to their cause in the women’s bathroom in order to avoid detection, and solicited advice from Eleanor Holmes Norton, then an American Civil Liberties Union attorney, now a long-serving member of congress. “If we saw somebody in the restroom that we trusted or knew pretty well, we would say something like, ‘He and I both graduated from Columbia Journalism School, and now he’s a writer and I’m not’ and just sort of gauge what the reaction would be before presenting what we were doing,” says Povich.

When Newsweek published their cover story "Women in Revolt" in 1970, which was about the women's liberation members and war on sexism, it coincided with a lawsuit brought against the publication: "The day [it] hit the stands... 46 of us sued the magazine for sex discrimination," Povich recalls. "We were the first women in the media to sue and comprised the first female class action suit. Following us, women working at Time Inc., The Reader’s Digest, The New York Times, NBC and the Associated Press, among others, also sued their employers." (This was brought up in an episode of Mad Men, via a mention of the Ladies' Home Journal sit-in and the big women's equality march on Fifth Avenue that drew 50,000 people.)

In a short piece in TIME published in March, 1970 (which you can read here with a subscription), they noted that, "Until recently, the rebellious restlessness of women in journalism had rarely surfaced," and that, "Osborn Elliott, Newsweek‘s editor in chief, said that most of his researchers are women because of a 'newsmagazine tradition going back almost 50 years.'"

Povich's book (as well as the show) steps outside the Newsweek newsroom to show the breaking of that "tradition." The 1970 revolt (and lawsuit) was a start, but when "management didn’t fulfill its promises to hire and promote women," Povich recalls, "we sued again in 1972. By this time, Katharine Graham, the owner of The Washington Post Company, which owned Newsweek, had become familiar with feminism, thanks to her friendship with Gloria Steinem. She ordered her corporate lawyer, Joseph Califano, later the Secretary of Health, Education and Welfare under President Jimmy Carter, to settle the case. We set goals and timetables: By the end of 1975, one-third of all reporters and writers were to be women, one third of all researchers were to be men, and there would be a woman senior editor. I was named Newsweek’s first woman Senior Editor in 1975."

As for the show, it's just not as powerful as it should be. We'd have to agree with the AV Club that, so far (having just seen the pilot) it's a bit reliant on clichés, and everyone looks like they got dressed at a Halloween costume shop.

See for yourself; Good Girls Revolt is now on Amazon.