Today the Daily News is scraping the bottom of the Amanda Bynes bong for resin (hey, we've all been there), and has published an interview with "a former New Yorker" who knew the troubled actress for a couple of months or one day or whatever. Typically we'd ignore this—but the piece is just too bizarre and sad, complete with a styled photoshoot. 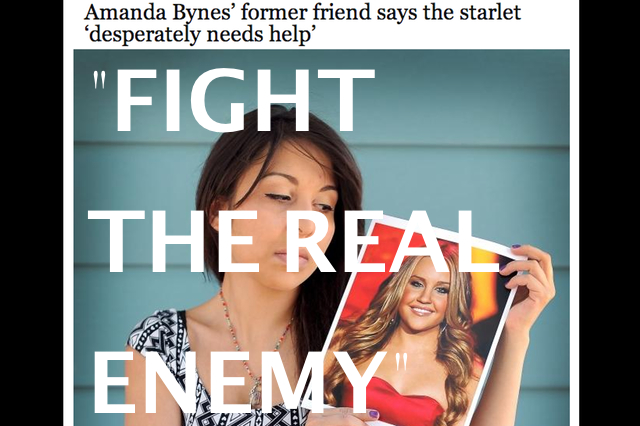 One of the images of one-time Bynes's "friend" Ana Rivera shows the young woman staring at a glossy photo of Bynes before her fall. Another shows her standing in a grassy field against a car—the caption reads, "Ana RIvera no longer communicates with Amanda Bynes since the former child star changed her number." Everything about this article is sad.

Not like, crying sad. But just sad sad sad. It will make you feel sad for Bynes, Rivera, and all of us, and all of our children, and children's children, for forever. This is the world we live in now. Young women with mental problems have their deteriorating state flung around as distorted entertainment (Rivera is described by the newspaper as having a "front-row seat to the actress' downward spiral"). And then other young women like Rivera try to get attention off of the sad state of affairs—people aren't even hitching their wagons to rising stars anymore!

And for what? Here's what we "learn" in the Daily News piece—titled "Amanda Bynes’ former friend says the starlet ‘desperately needs help’": once Amanda Bynes dyed her hair purple without wearing gloves, she watched Marilyn Monroe movies on mute, she prefers red light bulbs, she didn't have a shower curtain, and "she has a hard time talking to people because she's so weird." Cool story, Rivera. One that will come up every time you are Googled, forever.

#Amanda Bynes
#Ana Rivera
#daily news
#sad
Do you know the scoop? Comment below or Send us a Tip