Whitman served as editor of the Brooklyn Daily Eagle from 1846 to 1848, at the time headquartered on Old Fulton Street in Dumbo. This was their office in the early 1900s. (Courtesy of the Library of Congress)

A "new" Walt Whitman story has been unearthed 125 years after his death. The novel, titled The Life and Adventures of Jack Engle, was only published once in a newspaper in 1852. It ran in six installments, and was published anonymously. The Sunday Dispatch, a New York City paper that Whitman was known to contribute to, ran the 36,000-word story in March of that year, and alerted the public via an advertisement that ran in a rival paper, the New York Times. You can see the ad here on page 3; it read:

"This week's Sunday Dispatch will contain The Life and Adventures of Jack Engle, an autobiography, in which will be handled the philosophy, philanthropy, pauperism, law, crime, love, matrimony, morals... which are characteristic of this great city at the present time, including the manners and morals of boarding houses, some scenes from church history, operations in Wall St, with graphic sketches of men and women, as they appear to the public, and as they appear in other scenes not public. Read it and you will find some familiar cases and characters, with explanations necessary to properly understand what it is about."

According to the NY Times, the story was rediscovered last summer by a graduate student, and you can now purchase it in book form thanks to the University of Iowa Press. You can also read it all online, as it was published on The Walt Whitman Quarterly Review on Monday. 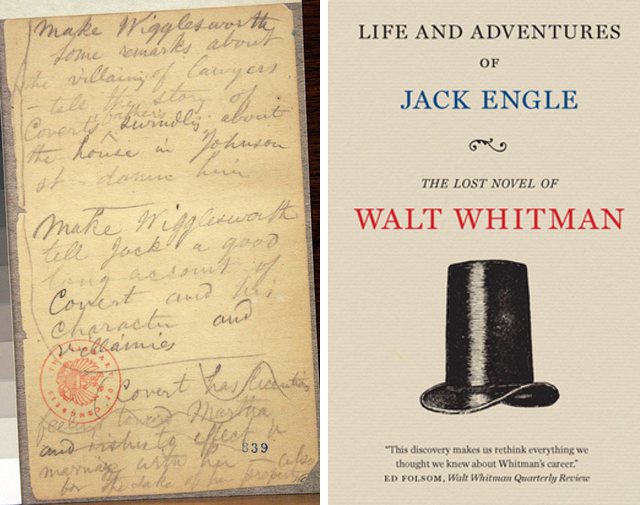 If that old timey language above didn't give you an idea of what this story is really about, the Times notes that it's a "quasi-Dickensian tale of an orphan’s adventures, it features a villainous lawyer, virtuous Quakers, glad-handing politicians, a sultry Spanish dancer and more than a few unlikely plot twists and jarring narrative shifts." And David S. Reynolds, a Whitman expert the City University of New York, told them, "This is Whitman’s take on the city mystery novel, a popular genre of the day that pitted the ‘upper 10 thousand’ — what we would call the 1 percent — against the lower million."

Reynolds also points out that in this newly unearthed story one might see "how a workaday journalist and mostly conventional poet transformed himself into the author of the sensuous, philosophical, wildly experimental and altogether unclassifiable free verse of Leaves of Grass," his groundbreaking work that was first published at a printing shop just around the corner from the Brooklyn Daily Eagle's offices.

At the time that he wrote this, Whitman had just left his post as editor of the Brooklyn Daily Eagle (where he was in the late 1840s), following a fallout with the paper's founder, Isaac Van Anden, "over the issue of slavery — Whitman was a supporter of the Wilmot Proviso, which prohibited the extension of slavery to new territories."

The man who found it was Zachary Turpin, first discovered the advertisement and then found "the only known original copy, which had not yet been digitized, in the Library of Congress." The story was never republished until now.