Summer in New York City, and particularly summer in New York City without air conditioning, is a freaking nightmare. The seasonal stew of heat, sweat, and humidity is so epically bad that it even made its way to Hollywood as a main player in the classic flick The Seven Year Itch. The movie features Marilyn Monroe's most famous scene, but that dramatic breeze wasn't her only tip for cooling down, here are a few more:

Tip #1: Sleep in the bathtub 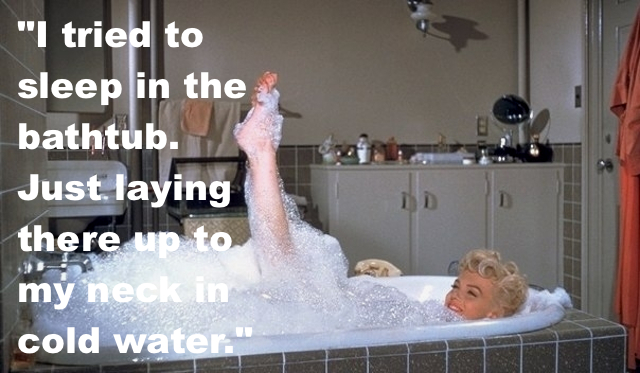 She tells Richard Sherman (played by Tom Ewell): "I'm just not made for the heat. This is my first summer in New York, and it's practically killing me. Do you know what I tried yesterday? I tried to sleep in the bathtub. Just laying there up to my neck in cold water."

Brainstorming on ways to cool down her own apartment, Monroe comes up with this contraption: "Maybe if I took the little fan, put it in the ice box, left the ice box door open, left the bedroom door open, then soaked the sheets and pillow case in ice water..."

Ewell's character suggests the two go to the movie theater to catch a film and soak up someone else's air conditioning, a classic idea that still works today. The two see Creature From The Black Lagoon (here's the scene).

Tip #4: Get an air-conditioner boyfriend 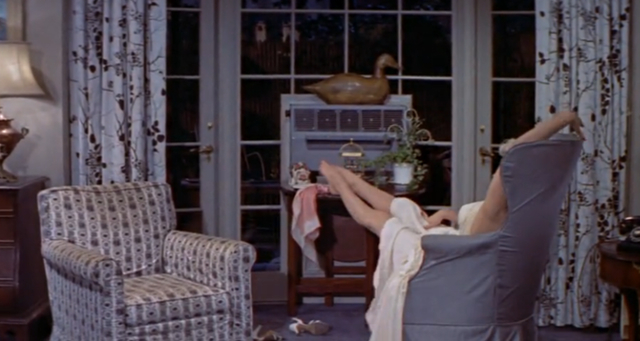 When seeking out an air-conditioner boyfriend, Monroe would suggest a married man, so things don't get complicated: "I think it's wonderful that you're married. With a married man it's all so simple. I mean it can't possibly ever get drastic."

Tip #5: Create a secret entrance into your neighbor's air-conditioned apartment

In the movie, Ewell's apartment has sealed off stairs that would go to the apartment upstairs, where Monroe's character lives. In order to discreetly come enjoy his air-conditioning, Monroe pulls up the sealed floor/ceiling: "I just pulled out the nails. You know what, we can do this all summer," she says walking down the steps. 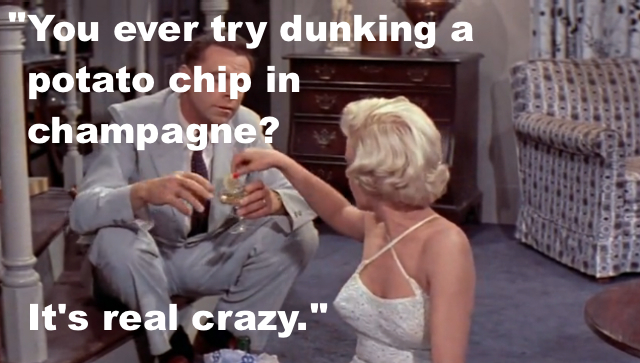 Monroe excitedly brings down champagne and potato chips, trying a new experiment: "You ever try dunking a potato chip in champagne? It's real crazy."

Marilyn is offered a drink: "I drink like a fish. Do you have gin? How do you drink gin? A martini sounds cool, I think I'll have a glass of that. A big, tall one."

Tip #8: Put your underwear in the freezer

When explaining how she keeps cool, Monroe says, "I keep my undies in the icebox!" This is mentioned again later in the movie when she goes to retrieve the champagne ("lt's in the icebox with the potato chips and my underwear.")

Tip #9: And yes, the old standby of the subway breeze

In one of the most iconic scenes in cinematic history, Monroe is standing above a New York City subway grate on the sidewalk as a subway passes underneath, blowing her dress up. She says, "Do you feel the breeze from the subway?! Isn't it delicious?" Ewell adds, "It sort of cools the ankles, doesn't it?"