9 Fun Facts You Might Not Know About Prospect Park

Prospect Park was Olmsted's favorite creation. We all know that parents have their preferences even if they claim they love you and your monster sibling equally. For Olmsted, the beloved son was Prospect Park, which he considered his "masterpiece" even though he already had the bigger, more popular Central Park under his belt. He and Vaux thought of Central Park as their trial run, and when they started blueprinting Prospect Park they were able to correct their mistakes from the first time around. For instance, in Central Park there are roads running right through, but Prospect Park's road runs around the outer ring of the park, leaving meadows, ravines and groves untouched, so once you're inside you can ramble through nature without coming into contact with a car or vicious jogger. The lake is also bigger and blessedly unhindered by tourists at the Boathouse. 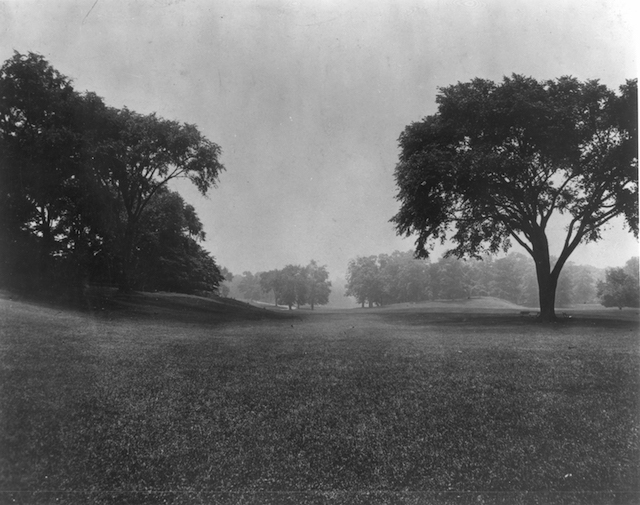 The park cost nearly $10 million to build. When the park was first authorized in 1860, it was stipulated that it shouldn't cost more than $300K, which was already a fortune on its own. But because of state laws giving the Brooklyn Park Commission essentially free reign over expenditures and design, the whole thing ended up costing $9,919,370, which included the cost of construction (about $5 million) and what the city spent to acquire park land. 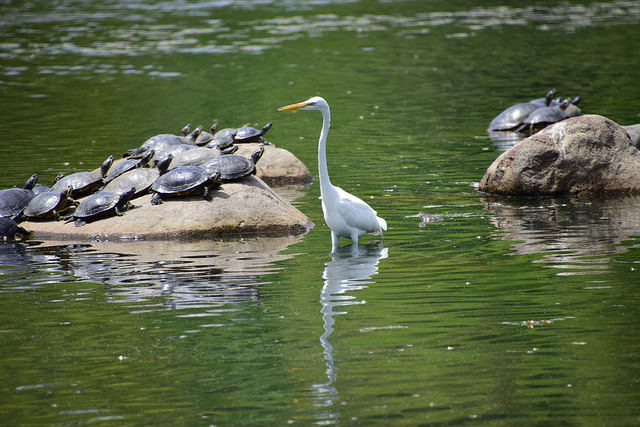 Prospect Park has always been a hotspot for wildlife. Today, the park is home to the Prospect Park Zoo (and its roaming peacocks), hosts lovely doggies at Dog Beach, and feeds goats tasty poison ivy and other invasive species in the spring and summer. Prospect Park's animal-friendly nature isn't new, though. Before the park existed, farmers let their animals roam in the area, and it took five years post-creation to kick all the pigs, goats, and horsies out. Then, in the early 1900s through the 1930s, the park's Long Meadow was full of grazing sheep and lambs; there was a deer paddock around the turn of the 20th century (one buck escaped!); there were cows at the Dairy, and a menagerie complete with a bear pit debuted in 1890, though those animals were moved the the zoo in 1935.

The park was one of the first in the city to be popular with picnickers. Once upon a time (in the 19th century) it was illegal to picnic in Central Park, but Prospect Park didn't have such draconian rules. In fact, the park was so popular with picnickers that park officials had to move the main picnic spot from the Dairy to a larger, more accommodating lawn within a decade of its opening. In the 1920s, the city set up 1200 picnic tables, but those were so crowded people had to dine in shifts. 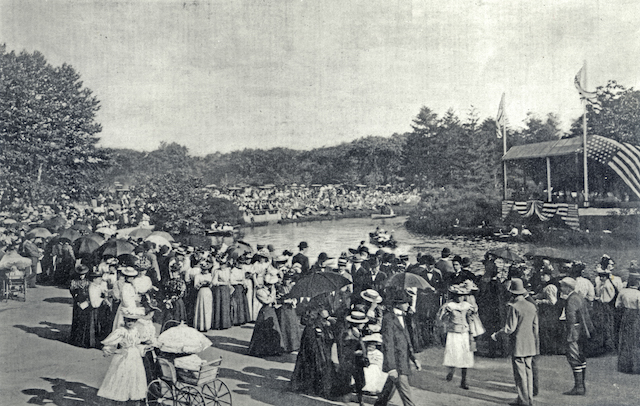 Robert Moses ruined some beautiful parts of the park. Robert Moses was notorious for pouring concrete all over beautiful things, and as Parks Commissioner he turned Prospect Park into one of his victims (Central Park suffered a similar fate at his hands). Still, his work accounted for a lot of the fun things inside. Though he got rid of the Dairy and turned part of the lake and one of the park's sublime vistas, Music Island, into an ice skating rink, he also built the bandshell, and created playgrounds, ballfields, and the zoo. There was also, briefly, a replica of Mount Vernon in the park starting in 1932, though that was gone by 1934.

Baseball's been a big part of Prospect Park's history. Baseball's popularity came to prominence in Brooklyn, and the sport was deemed America's "national pastime" not long before Prospect Park was built. Even before that, Brooklynites started playing ball on the Parade Ground, which had been used for military demonstrations, among other things. In 1846 then-local journalist Walt Whitman wrote for the Brooklyn Daily Eagle, "In our sun-down perambulations of late, through the outer parts of Brooklyn, we have observed several parties of youngsters playing "base," a certain game of ball. We wish such sights were more common among us… Let us go forth awhile, and get better air in our lungs...the game of ball is glorious." 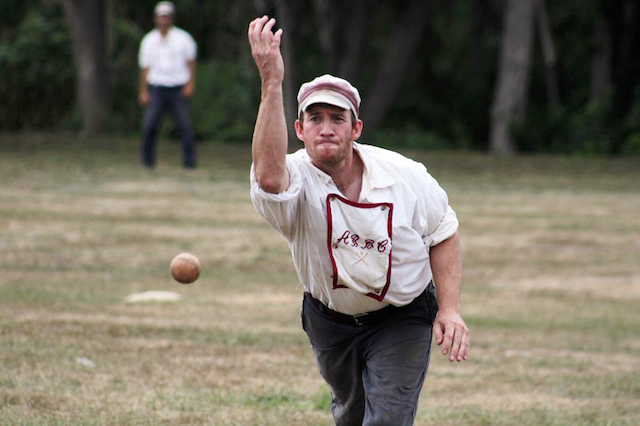 Once the park was established, and for the rest of the 19th century, ball clubs swarmed the Parade Ground, and by 1886 the area saw up to fifty matches a day. As the years went on, the Ground served as a starting point for heaps of burgeoning professional ball players, including Sandy Koufax of the Brooklyn (and, later, Los Angeles) Dodgers, and the Yankees' Whitey Ford. When the Dodgers left town in 1957, then-City Council president Abe Stark tried to keep the team in Brooklyn by proposing the city build a stadium on the Parade Ground, but the Dodgers turned him down and fled west, anyway.

Another fun baseball fact—in the 19th century, people played something called "ice baseball" in the park, which had more-or-less the same rules as regular baseball but was precariously played on the ice, as its name would suggest.

The park is home to one of the city's most famous trees. In 1872, a mutant elm tree named the Camperdown Elm made its way from Scotland to Prospect Park, eventually settling behind the Prospect Park boathouse. The Camperdown Elm then rocketed to tree fame because of its unusual branches, which grow parallel to the ground instead of up. Though the tree was close to death in the 1960s, local poet Marianne Moore helped save its life by forming the conservation group the Friends of Prospect Park, and thanks to her the tree still stands today, gnarled, knotty, and awesome as ever. It's so famous, it even inspired the name of a Park Slope restaurant that opened earlier this year. 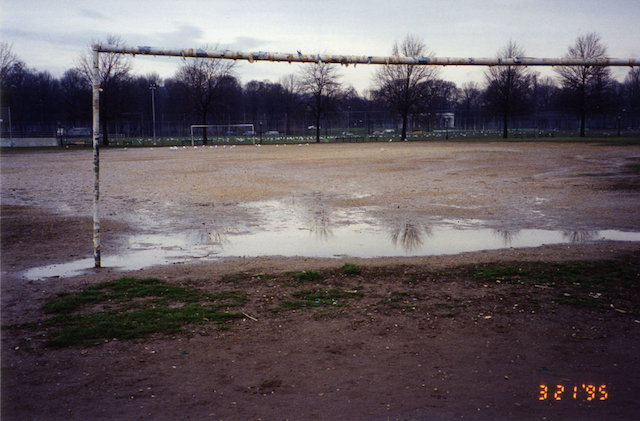 Drugs were sold at the carousel. Muggers used the cover provided by the park’s shrubs and foliage. One year, near the skating rink, a man was found shot to death, and another year, the acting supervisor of the zoo was arrested and charged with shooting animals.

In the 1970s, Prospect Park in Brooklyn looked more like a crime scene than the pastoral refuge imagined a century earlier by Frederick Law Olmsted and Calvert Vaux.

As if to advertise the woeful state of the park, in 1976 Columbia, the figure driving atop the arch at Grand Army Plaza, fell over in her chariot, a victim of disrepair.

, though, a Minnesota native named Tupper Thomas was hired as the park's administrator. She ended up founding the Prospect Park Alliance and spearheading a massive initiative to restore the park to its former glory.

It's popular with Hollywood. Prospect Park might not be as immediately recognizable as its counterpart across the river, but it has appeared in a number of movies over the years. Films include Sophie's Choice, which featured the park's lovely Vale of Cashmere; the Wolf of Wall Street, where it stood in for Hyde Park in London; the 1995 Harvey Keitel film Smoke; and As Good As It Gets, in which Helen Hunt's character lives near the park.