9 Facts You May Not Know About The Lower East Side

The Lower East Side has an incredibly rich history—once home to two great estates and a smattering of working-class artisans, the neighborhood famously became a gateway for immigrants from everywhere from Germany to Eastern Europe to China to Puerto Rico, making it a true melting pot. This rich cultural background has been threatened by rampant gentrification and luxury developments over the years, so it's worth taking a look at some lesser known facts about the 'hood, with a little help from the Tenement Museum and others; leave any trivia we missed in the comments. 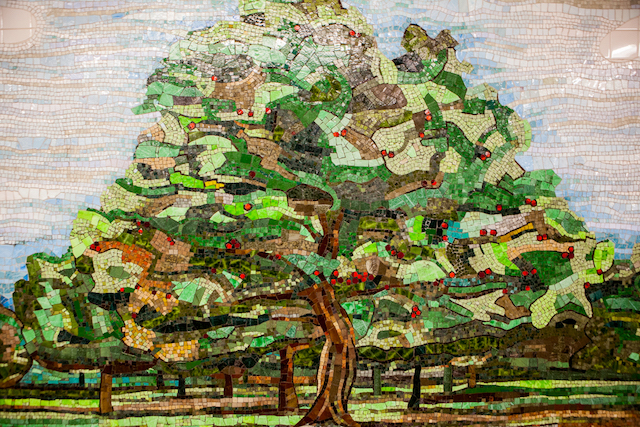 1. Before the Revolutionary War, the Lower East Side was primarily divided up by two major estates. The first estate belonged to James de Lancey, a politician and the acting colonial governor of New York who was loyal to the British even though he voted against the Stamp Act in 1756. The de Lancey farm, as it was known, ran from Division Street up to Houston Street east of the Bowery. Orchard Street, which fell within those boundaries, was actually a real orchard filled with cherry trees, which is why the uptown F train platform at the Delancey/Essex station boasts cherry grove mosaics.

De Lancey's tenants were primarily artisans and working class folks, but the de Lancey family lost their land when the colonies won the war, and New York state took over. Sadly, the artisans were no longer able to afford the land, and wealthier families moved in.
(Sounds familiar...) There aren't many federal-style homes standing from around that time, though there's still one stalwart on Allen Street.

The second estate belonged to the Rutgers family, and their grid was located further south from the de Lanceys' property. Rutgers was lucky enough to get a spot along the shoreline, with the northern border running up Division Street and just a corner buttressing the Bowery. Unlike de Lancey, patriarch Henry Rutgers was a revolutionary, and oversaw recruitment in the army on the part of the colonies. His home, however, was occupied by the British during the war, though Rutgers later returned to his estate. 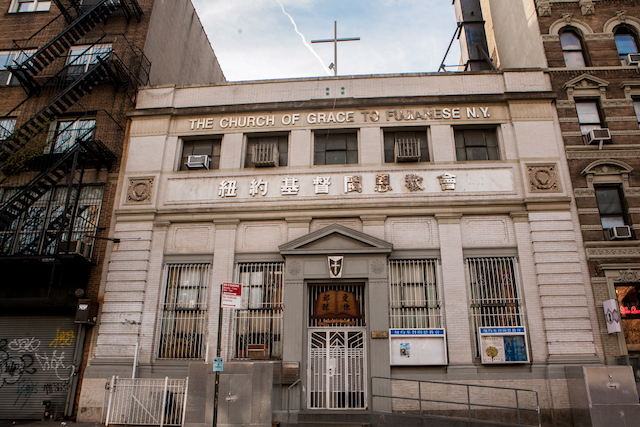 2. There's an old municipal bathhouse on Delancey and Rivington that's since been repurposed as a Chinese-language Protestant church. Municipal bathhouses were all the rage in the 19th century, when social reformers began to believe high mortality rates were being caused by uncleanliness citywide. Mott Street scored the city's first public bathhouse in 1852, and by early 20th Century they were all over the East Village and Lower East Side—one bathhouse, located on Allen Street near Rivington Street, was in use by area residents until 1975. Now, though, it's the Church of Grace to Fujianese, though you can still see the seahorse and seashell iconography on its facade from the days of yore. 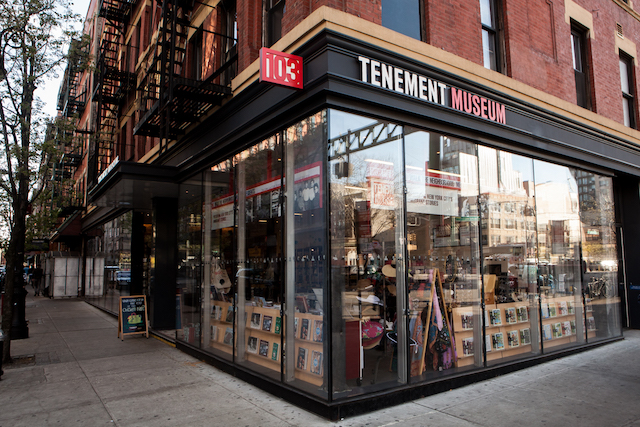 3. The Lower East Side has a long (and continued!) history as a "gateway neighborhood," mostly thanks to its role as a garment manufacturing hub in the 19th century. The LES has long since been synonymous with the immigrant experience—in the mid-1800s the area was populated by German immigrants, famously followed by Eastern European Jews and Italian immigrants about 20 to 30 years later. Chinese immigrants followed, and then newcomers from Puerto Rico and the Dominican Republic.

There are a couple of reasons why the first wave of immigrants headed to the Lower East Side, but in the 1840s and 1850s, the main draw was the neighborhood's proximity to jobs. The neighborhood was laden with small-scale garment manufacturers, and by the 1880s and 1890s, the LES was the garment manufacturing capital for the entire nation, with 70 percent of women's clothing made in the neighborhood. On the Orchard Street block where the Tenement museum currently stands, there were once as many as 23 small-scale factories.

And of course, there was the housing—though the LES was full of two-story woodframe homes in the 18th century, by the mid-to-late 19th century larger brick tenement buildings started popping up to address a housing shortage. These narrow buildings, while typically cramped and filthy, were utilized by newly-arrived immigrant families, since they were cheap and could be divided up into multi-family living spaces. They were so popular with immigrants that by the turn of the 20th century, nearly 2.3 million people lived in tenement houses.

4. Bars on the Bowery used to be lethal...literally. The Bowery was filled with bars long before ghosts and rich people moved into The Bowery Hotel, but in the 19th century, it wasn't exactly a place for laypeople to knock back a few cocktails. Though you could find some standard saloons, back then, the street played home to a number of "shock houses" and "suicide halls" for people who wished to kill themselves, either slowly or all at once.

Shock houses were for the drinkers who preferred to drag out the destruction of their organs—they were dubbed as such because patrons would "get a shock, walk a block, and fall into the gutter," according to Luc Sante's excellent NYC chronicle Low Life. These bars included Doctor's, which offered drinkers their seventh drink free and provided sleeping benches for five cents; the Billy Goat, where you could get two drinks for a nickel between 5 and 5:30 a.m., and the Dump, which was perfectly named. The liquor at these bars was mixed with all sorts of terrible things, like benzene, camphor and cocaine, and drinks were cheap as hell.

Suicide halls, like McGurk's at 295 Bowery, were pretty much as they sound. McGurk's was primarily a sailor bar, but it was also a prostitute hangout, and Low Life described it as "the lowest rung" for women who were down on their luck. In 1899, as many as six people killed themselves on the premises, and even more at least tried. The suicides and suicide attempts were a big draw for tourists, and a large part of what made McGurk's so successful before it shut down in 1902.

5. The St. Patrick's Day Parade used to run though the Lower East Side. The St. Patrick's Day parade as we know it takes over Fifth Avenue uptown, but in its early days it ran through Lower Manhattan, which makes sense considering that's where the city's Irish population was centralized way back when. It's not clear exactly when the first parade was held, although the parade organization officially pinpoints the date as March 17, 1762. Newspaper articles from the 1770s describe 400 Irishmen marching from Lower Broadway to taverns on the Bowery, which was a drinking street even before the suicide halls moved in.

By the mid-1800s, when even more Irish immigrants moved to New York during the Great Potato Famine, thousands upon thousands of marchers would take over Lower Manhattan from City Hall to the Bowery to East Broadway to Grand Street—in 1870, that procession would squiggle up to Union Square. The parade moved uptown in 1879, after St. Patrick's Cathedral (which was originally on Prince Street) was constructed on 5th Avenue.

6. The LES was Ground Zero for the famous food riots in 1917. When the country was on the cusp of entering World War I, the average cost of an LES family's groceries spiked from $22-a-month to $59-a-month, which was devastating considering a family's monthly income could be as little as $40. Working class families were unable to afford standard items like butter and eggs, and conditions in the already cramped and difficult neighborhood got worse.

The riots officially began in Brooklyn on February 19, 1917, but they quickly spread to the Lower East Side, where hundreds of frustrated housewives marched from Rutgers Square to City Hall on February 20th to beg city officials to help bring down the cost of groceries. Things turned violent, with women shouting at officials, "We want food for our children!” and attacking policemen.

Advocates from the Mothers’ Anti-High Price League demanded the city, state and national governments provide $2 million to help restock stores and provide school lunches for children, but the Lower East Side continued to physically revolt—a Times piece from 1917 describes: "Through Pitt, Ludlow, Rivington, Essex, Suffolk and all of the east side streets the crowd surged, passing from one shop to another… waving the heads and wings and mutilated bodies of chickens." By early March, the city provided the area with some lower-cost produce and groceries. 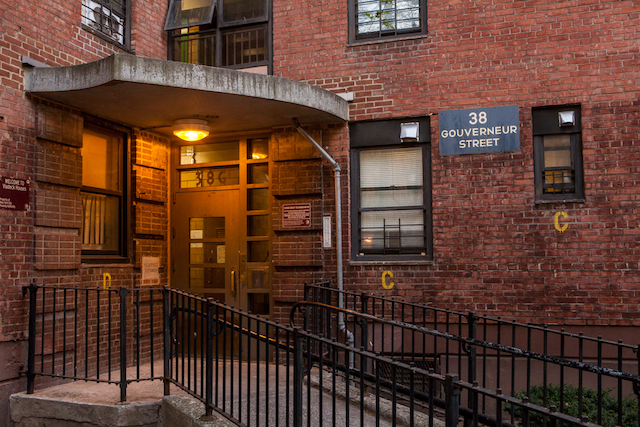 7. The LES is home to the city's first housing project. While the tenements were a private market response to an affordable housing crisis in the 19th century, in the 20th century (1938, to be exact) the city decided to address the decrepit quality of housing for the poorest New Yorkers by rezoning the area along the city's waterfront to build public housing. The projects were pitched as large-scale apartment complexes that would stretch over a number of blocks, complete with playgrounds and public schools—the U.S. Housing Authority Administrator at the time argued the developments would permit the government to "rehouse as many slum dwellers as possible in decent and healthful homes."

Though there was already a public housing project on East 3rd Street, it was neither part of the zoning plan nor financed by the city. Instead, the first development was the Vladeck Houses bounded by Gouverneur Street/Henry Street/Water Street/Jackson Street. The development was named after Baruch Charney Vladeck, an original member of the NYCHA board who helped plan financing for the projects. When the Vladeck Houses opened in November 1939, Mayor Fiorello LaGuardia described the development as "a unity of families to whom a city is giving their birthright." Over the next few decades, the East Side waterfront gained a whole host of housing projects, including the Rutgers Houses, LaGuardia Houses, Riis and Wald developments, and Baruch Houses. 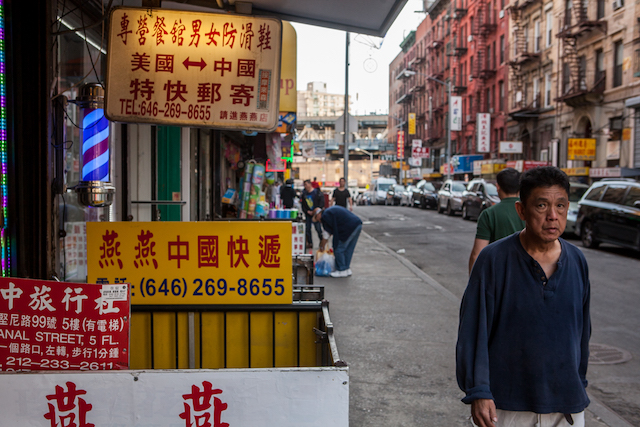 8. The neighborhood's borders are up for dispute. Not that this isn't the case for most neighborhoods—the East Williamsburg/Bushwick battle will never die—but while the Lower East Side officially begins at East Houston Street, not long ago residents considered most of the East Village part of the neighborhood, too, with the northern boundary stretching all the way up to 14th Street.

It's also noteworthy that the LES is can be difficult to navigate. It's serviced by far fewer subway stops than the West Side, and the way the streets are gridded makes it much harder for car traffic to cut through. 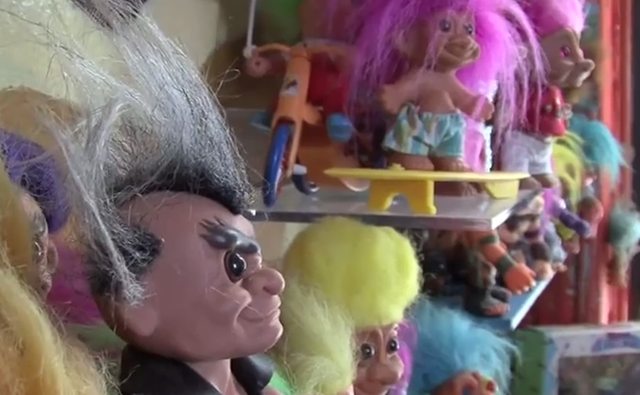 9. There's a troll museum in an artist's apartment in the neighborhood. Artist, museum curator, and elf ear-wearer Reverend Jen runs the city's only Troll Museum out of her six-story rent-controlled walkup, and though you have to make an appointment with her in order to get inside, if you do you're in for a trip. The 16-year-old museum boasts over 400 colorful troll dolls, all of which, according to Untapped Cities, have managed to survive both a steam pipe explosion in the apartment in 2010 and Reverend Jen's Chihuahua, who likes to chew on the museum's subjects.

The trolls are incredibly diverse—Reverend Jen's even got an Elvis troll, some scary punk rock trolls, and a two-headed troll encased in Plexiglass. The museum has notably been in danger of closing over the years, just like everything else in the neighborhood.