9 Canadian Music And Food Festivals Worth Crossing The Border For 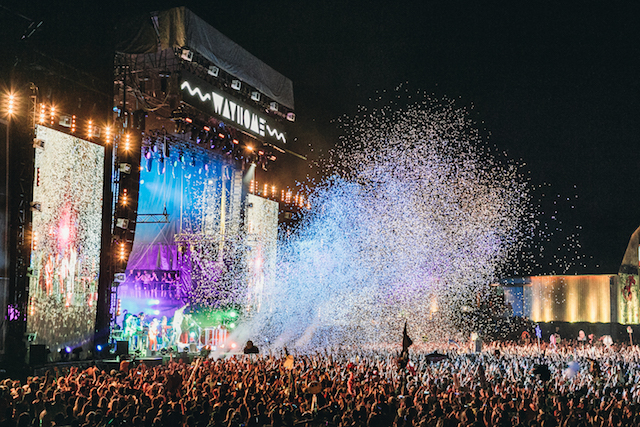 The great land of Canada offers experiences that are one of a kind. It’s a place of diversity, vast landscapes, bustling urban spaces, and (most importantly for travelers) glorious summer days, meaning now’s the time to plan a trip north to go festival-hopping.

A stone’s throw away from many northern states, the Canadian province of Ontario hosts some of the country’s most exciting, Insta-worthy events. So if you’re ready to venture beyond the usual and experience something truly unique, here are some of the top events happening just over the border this summer.

The name says it all—the River & Sky Music/Camping Festival is all about enjoying natural Canadian beauty and talent at the same time. Camp out under the stars between July 20th and 23rd in the small town of Field, mid-way between the Northern Ontario cities of Sudbury and North Bay. Embrace the great Canadian outdoors while discovering new bands like Weaves, Pup, Timbre Timbre, and Wintersleep.

Flume, Imagine Dragons, and Frank Ocean will be gracing the stage at WayHome this year, and they’re backed by an all-star lineup performing between July 28th and 30th. WayHome is a celebration of music, food, art, and film; “a kaleidoscope of sound, smell, color, and spectacle.” This convergence of music and art takes place on the event grounds at Burl’s Creek in Oro-Medonte, about a 90-minute drive from downtown Toronto. Shuttle bus service for festival-goers is offered from a number of cities including Toronto and Ottawa.

*Note that WayHome is paused for the 2018 season—but we're hoping it's back soon!

The Southern Ontario town of Brantford, birthplace of Wayne Gretzky, plays host to WTFEST on July 29th, with Our Lady Peace headlining a roster of acts including Collective Soul, Tonic, Soul Asylum, Treble Charger and Sumo Cyco. The event takes place over a single day, making it the perfect event to center your weekend getaway to Canada around. There will be plenty of local food and art vendors to keep you entertained (and full) between acts, but you’ve got to move quickly—WTFEST is almost sold out.

This free festival proudly offers five stages hosting the “world’s best folk music,” along with a fresh, local food court and craft artisan village. Between August 11th and 13th, festival-goers can immerse themselves in traditional Celtic culture in Goderich on the breathtaking shores of Lake Huron, only a couple of hours from Detroit.

Get a taste of the Caribbean at Toronto’s nationally acclaimed JerkFest. Anyone with a taste for spice and southern flavors has to swing by this festival, which stretches from August 10th to 13th at Centennial Park and features R&B stars such as Freddie Jackson and Ikaya. Consider yourself a “Jerkologist” in the making? Enter the “So You Think You Can Jerk” cook-off, or strap on your bib for the Hot & Spicy Jerk Eating Competition.

MGMT, Mother Mother, DJ Jazzy Jeff are just some of the 40+ acts taking the stage between August 18th and 20th in Elora’s Bissell Park. Weekend passes are relatively inexpensive for the number of jaw-dropping shows you’re bound to see in what many consider one of the most charming small towns in all of Canada—less than a two-hour drive from Toronto.

Make the trip across the border and head to Burl’s Creek in Oro-Medonte between August 18th to 20th for this amazing festival imported from the UK and making its North American debut this summer. The lineup offers an eclectic mix of musical and culinary entertainment, including Ben Harper, Weezer, OK Go, The Strumbellas, De La Soul, and others alongside a roster of celebrity chefs.

Bring a bib and a big appetite to Canada’s Largest Ribfest in Burlington (on the shores of Lake Ontario between Toronto and Niagara Falls) and enjoy all the ribs you can get your hands on. Rub elbows with award-winning ribbers and get ready to get messy from September 1st to 4th. Digest and decompress while listening to the 30+ acts performing throughout the weekend.

Come experience Canada’s most acclaimed wine region. Between September 8th and 24th, the Niagara Grape & Wine Festival will be offering over 100 events featuring live performances, fresh local food, and cellar door experiences. Located in Montebello Park in the heart of St. Catharines, less than an hour from Buffalo, this festival is a celebration of the wine and culinary bounty of the Niagara Region.

This post is a sponsored collaboration between Destination Canada and Gothamist staff.

#destination canada
#gothamist collaboration
Do you know the scoop? Send us a Tip