8 Facts You May Not Know About Columbus Circle

Debate continues to rage over the fate of the Christopher Columbus statue that towers over Columbus Circle, at the southwest corner of Central Park—although the statue is intended to celebrate the country's Italian-American population, critics say Columbus's history of colonialism and genocide make it a symbol of hate. Statue controversy aside, this popular traffic circle has a long history, and here are some of our favorite facts:

1. Columbus Circle's concept was part of the original blueprint for Central Park.
Prior to the construction of Central Park, the Columbus Circle area was predominantly farmland, as was the case with much of the Upper West Side at the time, and it developed more slowly than some of the other areas in (what is now) the neighborhood. When Frederick Law Olmsted and Calvert Vaux began drawing up plans for Central Park, they wanted to include a traffic circle at the park's Merchants' Gate entrance at 8th Avenue, similar to the Arc de Triomphe de l'Étoile at the end of the Champs-Élysées in Paris. In the end, Olmsted was not responsible for the traffic circle—traffic safety pioneer William P. Eno, whose other credits include the rotary traffic plans at the aforementioned Arc de Triomphe and Piccadilly Circus in London, designed the circle, which was completed in 1905. It was then that the area started to quickly develop. 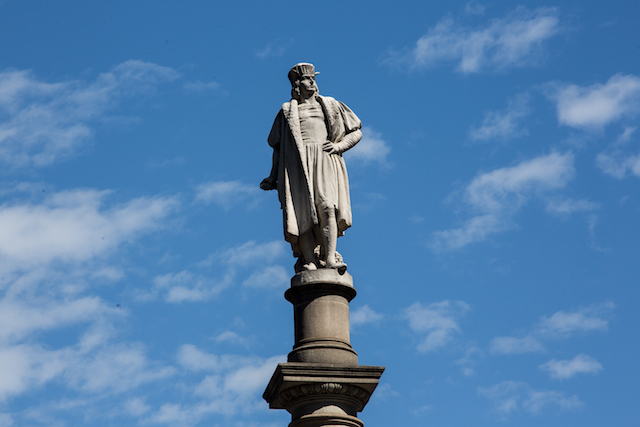 2. The Christopher Columbus statue was built using funds raised by an Italian-language newspaper.
The statue of Christopher Columbus, located in the center of the traffic circle, was sculpted by Roman sculptor Gaetano Russo and gifted to the City of New York by the Italian-Americans of New York in 1892 in honor of the 400th anniversary of Columbus's first voyage to the Americas. Though Columbus never set foot in what is now the mainland United States, Italian-Americans considered the (now controversial) explorer a symbol of their success in a country that was hostile to them as new immigrants, and an Italian-language newspaper, Il Progresso, launched a fund-raising campaign to install the 70-feet statue in the center of town. When the statue's cornerstone was laid on September 17th, 1892, there was a procession from Little Italy up to Columbus Circle, which the Times described as the following:

It was something unusual for the avenue and the regular promenaders were to be seen gazing at the spectacle from the chamber windows while Italian peripatetic vendors thronged the sidewalks, and Italian mothers in rainbow attire dandled their children in their arms on the steps of millionaires’ palaces. The column of men in uniforms seldom seen above Bleecker Street marched up between the rows of brownstone houses to the lively music of the Italian national air. It was Italy’s day…

The statue was dedicated on October 12th, 1892, and underwent a renovation in 2005. It also briefly got its own apartment in 2012, as part of the public art installation "Discovering Columbus." 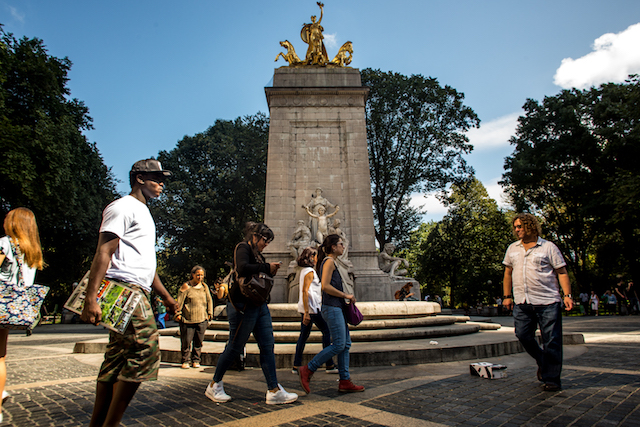 3. The fountain at the entrance to Central Park is a national monument to the exploded battleship U.S.S. Maine.
The U.S.S. Maine, built at the New York Naval Yard in Brooklyn, exploded and sank in Havana Harbor on February 15th, 1898, killing 261 out of 355 soldiers, officers and Marines onboard. The sinking of the naval ship was used as a pretext by the U.S. to declare war on Spain, though a National Geographic investigation a century later determined that the cause may have been an accident or a mine. The Spanish-American war, which lasted from April to December 1898, resulted in Puerto Rico and the Philippines becoming American territories.

In 1912, architect Harold Van Buren Magonigle constructed the massive U.S.S. Maine National Monument, complete with a fountain, sculptures by Attilio Piccirilli, and a pylon topped by a bronze Columbia Triumphant and flying horses. The monument was dedicated in May 1913. 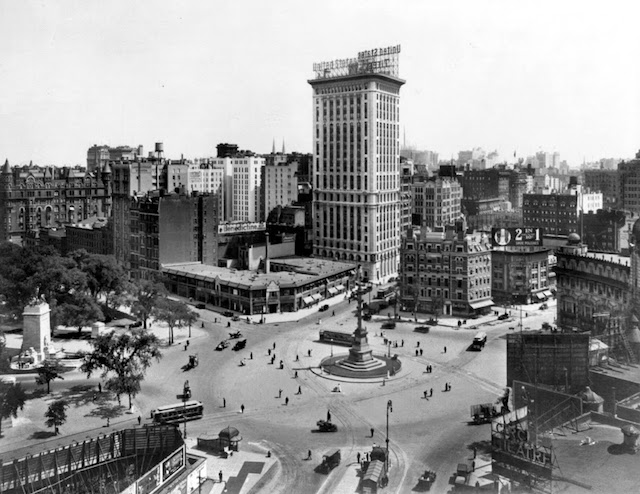 Columbus Circle in 1913. (Courtesy of the NYPL)

4. In the early 1900s, Columbus Circle was a popular theater district (and drinking spot).
In 1903, just two years before the installation of the area's famed traffic circle, the 1,355-capacity Majestic Theatre opened at 5 Columbus Circle. The theater was famous for hosting first musical production of The Wizard of Oz, among other things, and thanks to the theater crowd it attracted, a number of eating and drinking establishments popped up in the area soon after it opened. According to the Bowery Boys, one such establishment, Healy’s at 66th and Broadway, was raided by police early in the morning of August 13, 1913, shortly after then-Mayor William J. Gaynor mandated instituted a 1 a.m. curfew for establishments that served liquor. Thomas Healy, who owned Healy's, decided to keep his bar open until 2 a.m., prompting cops to violently throw patrons out one night. Per the Times:

The recalcitrant guests found themselves enfolded in the uniformed arms, lifted into the air, rushed down the disordered aisles and literally thrown into Columbus Avenue. In the scramble, tables went over, chairs were smashed, electroliers were damaged, glasses and crockery were broken into fragments. There was pandemonium for a time. 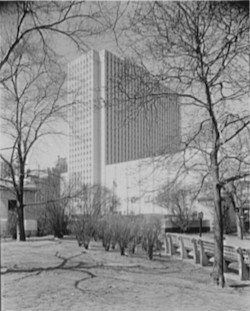 The Coliseum in April 1956, viewed from a park. (Library of Congress)
5. For nearly half a century, Columbus Circle was home to what was once the city's largest convention center.

The Majestic Theatre was torn down in 1954 to make room for the New York Coliseum, a 323,000-square-foot convention center built under city planner Robert Moses. Moses condemned the west side of Columbus Avenue from 58th to 60th Streets (more on that later) as a slum, freeing up federal slum clearance cash to fund his project.

The result, which debuted in 1956, was rather hideous, as the Times put it in 1987—a "functionally advanced" tank of a building. The windowless space boasted four exhibition floors that could hold six simultaneous events, along with office space and a massive three-story well with room for boats, planes, and, in 1996, a space capsule. The Coliseum hosted a number of trade shows during its existence, but as time went on it proved too small to draw the best shows, and in 1979 the city began to make plans for the 1.8 million square-foot Jacob K. Javits Center. The Coliseum was knocked down in 2000, and today the Time Warner Center sits in its place.

6. Robert Moses destroyed an entire Columbus Circle-adjacent neighborhood to make room for his projects.
In the 1950s, Moses razed San Juan Hill, a predominantly black neighborhood that stretched from 59th to 65th Streets, bordered by Amsterdam and 11th Avenues. Although the neighborhood had struggled with violent crime (its gangs reportedly inspired the opening sequence of West Side Story), it was also home to 7,000 people, had a rich cultural history (the Charleston was invented here), and boasted a number of famed jazz spots.

But in 1955 Moses had declared the area a "blighted slum," and thanks to his position as the head of the Mayor’s Committee on Slum Clearance, he was able to order the area cleared and replaced in part with what is now Lincoln Center, and used some of the federal funds to build the aforementioned Coliseum. San Juan Hill residents, meanwhile, attempted to fight Moses in court, but he used his power of eminent domain to kick them out of the area, and many ended up relocating to Harlem and the Bronx. 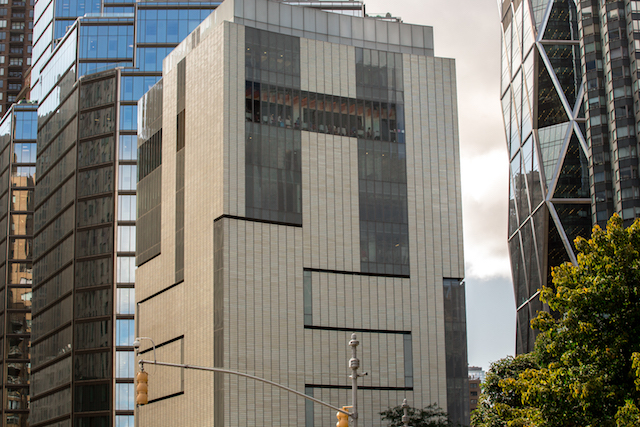 7. There's been a lot of drama over 2 Columbus Circle.
2 Columbus Circle, once home to the Pabst Grand Circle Hotel, has long been one of the area's most distinctive structures, though it's undergone some serious (and controversial) changes over the last few years. The original structure was designed by architect Edward Durell Stone and opened in 1964 to house Huntington Hartford's Gallery of Modern Art. It was widely reviled by critics, with the Times calling it "a die-cut Venetian palazzo on lollypops," eventually earning it the nickname "the Lollipop Building."

Still, ugly as it was, 2 Columbus Circle was our "Lollipop Building," so when the Museum of Arts and Design bought it from the city in 2002 and subsequently handed it over to architect Brad Cloepfil to redesign, there was an uproar. The Landmarks Preservation Commission failed to approve the building as a landmark, and though Cloepfil retained the building's dimensions, he removed its distinctive, quirky facade, replacing it with a more modern front decorated with windows that seem to say "Hi" from a distance. The building reopened in 2008. 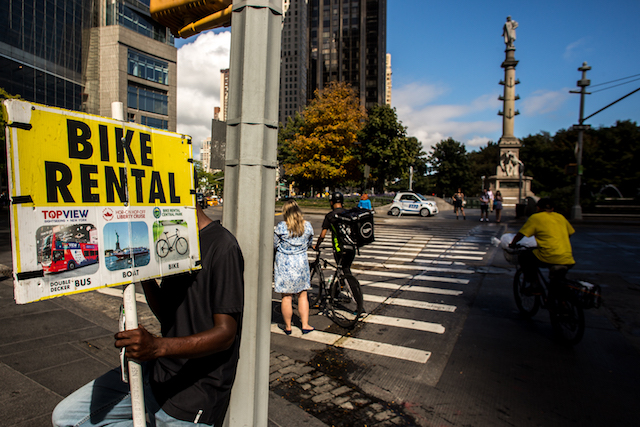 8. Columbus Circle is an official focal point.
Though it's not technically true, the area is considered the geographic center of the city, according to Untapped Cities, and all official distances to and from New York are recorded using the Columbus statue as the starting point. In fact, recipients of a C-2 visa, which is a non-immigrant visa permitting overseas nationals to briefly visit the United Nations and United Nations officials, have to stay within a 25-mile radius of Columbus Circle for the duration of their visa.

Got some more interesting facts about Columbus Circle you'd like to share? Let us know in the comments below.