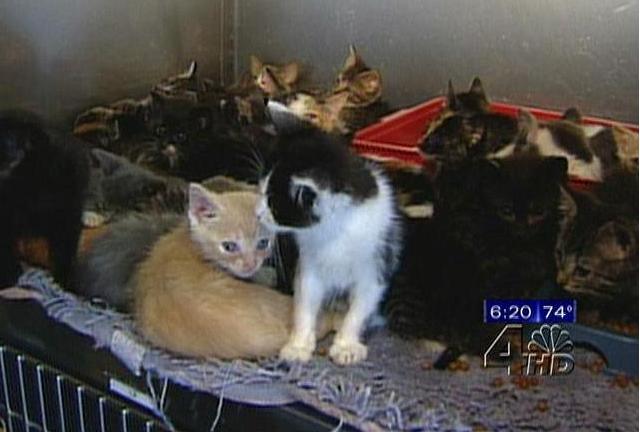 What is wrong with people? The director of the Mount Vernon Animal Shelter found three boxes full of kittens (63 of them!!!) on her doorstep. Paula Young believes that the kittens were used as bait during dogfighting in Westchester and possibly the Bronx. She told the Journal News, "It is impossible for one person to have all these kittens, calicos, tabbies, males and females."

A few days earlier, animal shelter workers found an older pit bull with its hind legs paralyzed and a number of puncture marks. Sean D'Aliose, manager at the Mount Vernon Animal Shelter, explained, "Kittens are dangled in front of the dogs, usually before a fight, to give them a taste of blood." Young thinks that the dog and kittens were abandoned because people were scared of authorities cracking down, in the wake of Michael Vick's indictment on dog fighting charges.

The AP spoke to a few animals rights/advocacy organizations about dog fighting. According to PETA, there are three levels of dog fightings: "Professional" entrepreneurs, amateurs, and street-corner participants. And NYC Animal Care and Control field officer Mike Pastore said organized dog fighting and arrests are rare in the city, "Even in the shelter do we rarely have a dog come through with the pockmarks and other signs of a fighting dog." (See this fact sheet about dog fighting from the Humane Society.) Representative Gary Ackerman has proposed legislation to toughen dog fighting penalties.

Here's video (WNBC, Journal News) and more photos of the kittens. Those interested in adopting the kittens can call Paula Young at 914-522-5945 or Jeannie Johnson at 914-699-PETS.