60 Years Ago Today Marilyn Monroe Stood Above A Subway Grate

The shot from NYC

The Seven Year Itch, starring Marilyn Monroe and Tom Ewell, was filmed between September 1st and November 4th, 1954—and on September 15th that famous scene above a subway grate on Lexington Avenue was captured. That was exactly 60 years ago today, so let's blow our skirts up and celebrate.

The movie, which mostly takes place inside of a New York City apartment during a hot summer, was primarily filmed in Hollywood, but some scenes were shot here in New York. The iconic subway grate scene was filmed in both places.

The September 15th shoot was the first one, and that took place around 590 Lexington Avenue at 52nd Street. Due to the loud crowd, however, they later had to reshoot the scene at a Hollywood soundstage, having not captured enough usable footage on location. This was, of course, all part of the plan—the studio released the location of the shoot beforehand, and fully anticipated a reshoot. 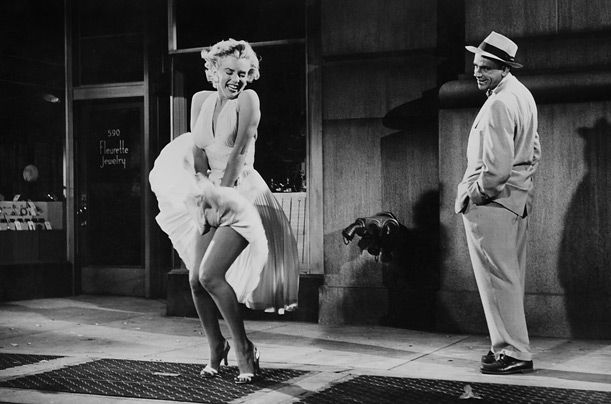 The shot in the movie, filmed at a Hollywood soundstage

A few years ago, the NY Times noted that "2,000 to 5,000 fans and photographers lined up on Sept. 15, 1954, and witnessed the billowing-dress sequence. Monroe, wearing an ecru Travilla halter dress with accordion pleats (and two pairs of white panties), stepped onto a subway grate in front of the Trans-Lux Theater. Klieg lights and cameras hit her; the special-effects man underground started the huge fan; and Wilder shot the scene over and over again as the crowd roared for more." There was one unhappy fan, however: Monroe's husband Joe DiMaggio felt the scene was exhibitionist—weeks later Monroe filed for divorce.

Most photos you see of this iconic image were shot during the media circus on Lexington (those photos are also more revealing than the shot that landed in the movie). While the streetscape over there has changed significantly, there are still subway grates in that location if you want to recreate the scene—look for the red awnings for the restaurant Le Relais De Venise L’Entrecôte, and you'll be in the right spot.

The MTA's Kevin Ortiz tells us the grates have "certainly been replaced since that time," and to his knowledge no plaques commemorating that iconic shot have been considered for the area.

UPDATE: Starting at 7 p.m. tonight, Flixel Photos will project this image on to the sides of various landmark buildings in Times Square, Union Square, Columbus Circle, and around Grand Central Station:

#anniversary
#Marilyn Monroe
#seven year itch
#subway grate
Do you know the scoop? Comment below or Send us a Tip