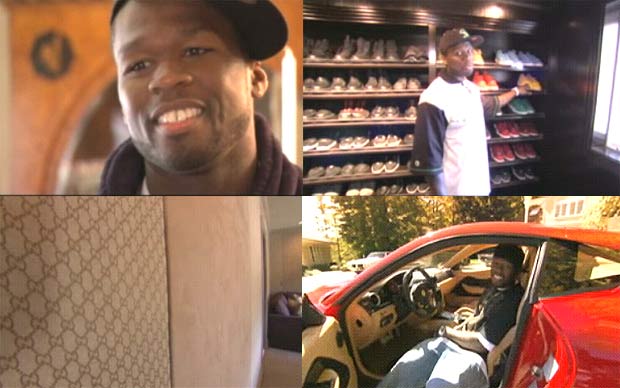 Our love-hate relationship with MTV Cribs has reached its climax: Tonight, 50 Cent will be giving a tour of his 48,000 square foot Farmington, Connecticut mansion. The home had a Miami Vice-vibe when the Queens native bought it for $4.1 million from Mike Tyson, but 50 quickly put his mark on it. He told the AP, "I like the look of an Architectural Digest [style]...There's a lot of good living going on, and it ain't based (on) the actual money that's being spent, it's the choices that people make. You don't have to buy a $50 million home to build a lifestyle that's equivalent."

That's probably why he has a game room decked out in Gucci leather - with the monogram (it's called the Gucci Room, natch). During a clip we watched, we learned that 50 is a bit bitter over the $80,000 dining room chandelier (the dining room has never been used - and that $80K could have been used to buy a Mercedes!), he's not sure when he'll ever wear yellow sneakers but he has them (most of his sneakers are G-Unit brand), and there's a strip club room, complete with poles and an acrylic swing.

You can watch the clip here, and the part where 50 is showing the "adult entertainment" room all by himself is cut with clips of adult entertainers performing in the room - and, yes, one lady is swinging. And this whole show might be a way to avoid the pesky, potentially dangerous open house, as he's selling the joint for $18.5 million (50 is tired of the long commute to NYC!).