5 Things To Do In NYC This Week

Audible brings Oscar and Tony nominee Carey Mulligan to the stage in Dennis Kelly's one-woman show Girls & Boys on Tuesday. The show premiered at the Royal Court Theatre in London earlier this year and will make its off-Broadway debut at the Minetta Lane Theater in the Village. Mulligan's critically acclaimed performance portrays a woman whose fate gradually takes a turn for the worst. (And since the show is produced by Audible, listeners have the opportunity to purchase discount tickets... but act fast, the show will only be running for five weeks).

Explore some of New York's finest cultural institutions for free at the 40th annual Museum Mile Festival. Aside from a free pass to museums like the Guggenheim, El Museo del Barrio, and The Met, you can experience the epic block party on the Mile. The stretch of Fifth Avenue from 82nd to 110th Street will be filled with people playing music, food vendors, and art available for purchase by local artists. 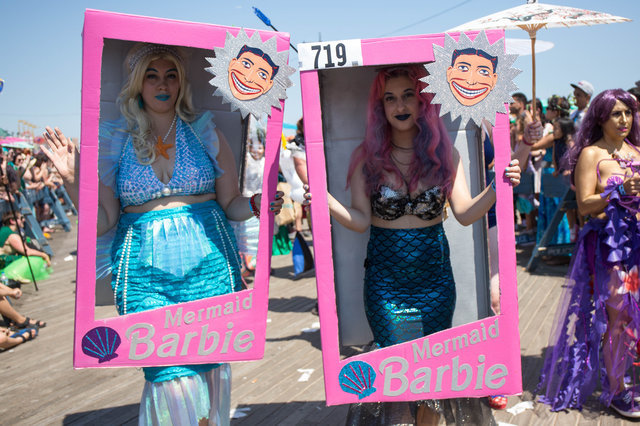 The 36th annual Coney Island Mermaid Parade sails through Brooklyn on Saturday. Whether you decide to slip into a costume to join the other sequined sea creatures or just stand around and gawk, it's a great time. The parade begins at Surf Avenue and West 21st Street and will travel along Boardwalk before ending at Steeplechase Plaza. If you’re planning on participating in the nautical nonsense, you can register here; you'll be joining this year's King & Queen: Neil Gaiman and Amanda Palmer!

Why sit at home alone swiping away when you can do it with comedienne Lane Moore and a room full of people? To those unfamiliar, Moore’s monthly show involves hooking her Tinder account up to a projector and chatting with men in real time—transforming the otherwise bleak and sometimes even downright horrific modern-day dating experience into a hilarious long-form improv show.

Learn how to make dumplings and braid challah at The Museum of Eldridge Street’s annual Egg Rolls, Egg Creams and Empanada Festival. The Chinese-Jewish-Puerto Rican festival celebrates the diverse communities that make up the Lower East Side. At the outdoor festival, you can also try your hand at Mahjong, listen to the sounds of Puerto Rican bomba music, and even make a yarmulke.

Every week we pick five things to check out around the city — have a suggestion? Email us.

#5 things
#events
#weekly events guide
Do you know the scoop? Comment below or Send us a Tip