5 Pointz Is Dead, And That's Not Such A Bad Thing

After months of court battles and two temporary stays of execution, a federal judge has refused to issue an injunction which would have prevented the owners of 5 Pointz, Queens’s self-described “graffiti Mecca,” from bulldozing it to make way for a pair of luxury high-rises. The whitewash went up in the dead of night. New Yorkers are upset. But they shouldn’t be, says Jay Edlin, author of Graffiti 365.

Jay, a native of the Bronx, wrote graffiti in New York under the names J.SON, Terror 161, and Tarantula 235 from the earliest days of the graffiti subculture in 1973 until Ed Koch brought the hammer down hard on graffiti writers in the late '80s.

The arguments against the demolition of 5 Pointz come in four flavors.

The first is that tearing down 5 Pointz to make way for high-priced condos is another example of unbridled gentrification, a plague upon our city. This gripe ignores two key facts, however: first, gentrification is inevitable; and second, this isn’t a clear-cut case of “greedy developers vs. struggling artists.” Jay thinks the Wolkoff family has been more than fair to Meres and his crew:

While Meres and Zimad are talented aerosol muralists who had a great run over the past decade, the Wolkoff family cannot be expected to forego redevelopment opportunities. After all, they allowed 5 Pointz to flourish for decades. I doubt the artists paid property taxes for use of the space during that period.

The second common complaint about 5 Pointz getting the axe is that destroying art is bad. Seems like a no-brainer, right? After all, we’d all be livid if some developer wanted to bulldoze the Met (and all its contents) to make room for more ludicrously expensive condos.

But Jay argues that graffiti is not the same as traditional art, and shouldn’t be treated as such. First, illegal graffiti and legal street art are separate animals with different goals and a different set of practitioners:

Graffiti exploded on the streets, walls, buses, and, most importantly, the subways of NYC in the '70s and '80s. The culture was based in criminality and fueled by adrenaline. The only payoff was fame, an insular type, that bypassed the public. Banksy-type mainstream notoriety didn't factor in. Although later graffiti incorporated elaborate characters and scenery, letters are its foundation.

While I grew up idolizing Stay High 149, Phase 2, Riff 170, and Tracy 168, kids who grew up in the '90s saw the rise of Shep Fairey, Barry McGee, and Kaws: museum darlings and millionaires. Powerful role models. So street artists go out having done most of their work in the safety of their studio or apartment and hit the streets hoping to circumvent the gallery system and get noticed by the art world. If they're lucky they become Swoon or Judith Supine. Many who get put on [display] stop painting illegally and so their commitment to the street seems fake—a contrived means to an end. To be fair, Shep Fairey has been arrested over a dozen times and has been in street brawls, Barry McGee still tags up in the streets, but they are more the exception than the rule. 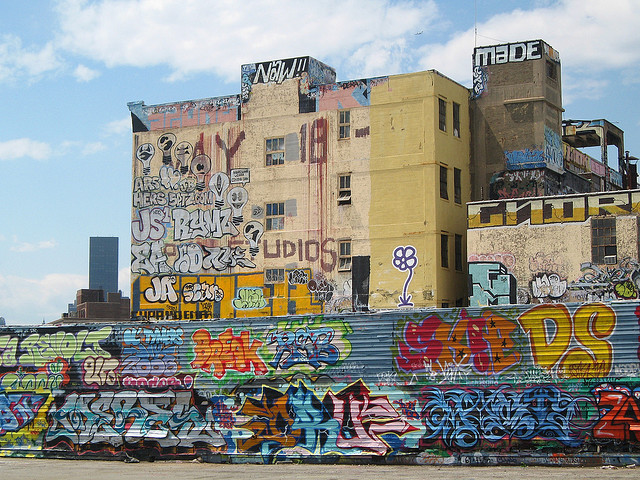 Second, legal graffiti and street art, even when skillful, lack the anti-authoritarian streak that defined graffiti originally. It is disingenuous to put the art at 5 Pointz in the same category as the burners and tags of the '70s, '80s, and '90s. For Jay, it’s the difference between a jungle and a zoo:

Legal graffiti depresses me. Although aesthetically beautiful, it's the tiger in a cage vs. the tiger running free through the jungle. By restricting graffiti to permission spots like 5 Pointz, Welling Court, The Bushwick Collective, or the Hall of Fame, it's tamed. By conceding to legal graffiti, artists follow the city's mandate of where graffiti is deemed appropriate, mainly ghetto areas or hipster neighborhoods like Williamsburg and Bushwick. I would rather see a fat cap tag on a Times Square newsstand than the most elaborate legal graffiti mural.

Third, Jay also believes the art at 5 Pointz lacks the spontaneity and ephemerality that makes graffiti a unique art form:

The materials used in both graffiti and street art are not intended with long-term viewing in mind. Spray paint, ink, or wheat pasted paper don't stand the test of time when living outdoors. Graffiti involves creating the work completely on the spot. The most a writer brings with him to a wall is a sketch...The adrenaline felt by kids risking their liberty shows through in the work.

Street art is more calculated and safer. Unlike graffiti art, street art can be made partially in a studio or using a printer and laptop. Street artists tend to have studios and assistants, which is unheard of for illegal graffiti artists. I don't see that much of a difference between street art and studio art. Pasting paper on a wall illegally, or in graff’s version, putting up stickers, just seems less cutting edge or risky than the old subway writers and illegal street bombers.

Two mediums employed by writers—acid etching on glass and plexi surfaces and massive tags occupying entire building sides done with paint-filled fire extinguishers—have no studio parallel. I like that. What's disappointing is that all the art stars who started out in conventional graffiti have sacrificed their letter forms in favor of figurative work that has a much greater commercial upside.

Fourth, illegal graffiti sprung out of a particular set of cultural and political circumstances; it was the visible language of an otherwise invisible group of people. Jean Baudrillard, one of the greatest minds of the 20th century, was an avid documentarian of New York graffiti. In Kool Killer, he noted:

In the spring of 1972 in New York a spate of graffiti broke out which, starting with ghetto walls and fences, finally overcame subways and buses, lorries and elevators, corridors and monuments, completely covering them in graphics ranging from the rudimentary to the sophisticated, whose content was neither political nor pornographic. These graphics consisted solely of names…

One thing is certain: both the graffitists and the muralists sprang up after the repressions of the great urban riots of 1966-70. Like the riots, graffiti was a savage offensive, but of another kind, changing content and terrain.

People are also indignant that the Wolkoffs have offered to let Meres curate walls in and around the new buildings, arguing that the new art won't be art at all, just window dressing for a yuppie utopia.

I hate to break it to you, but 5 Pointz has never been a space for unrestricted creativity. According to the complaint filed by Meres, the original agreement between the Wolkoffs and Meres stipulated that "a) the works of visual art were not to be political; b) they were to contain nothing religious; and c) no pornography was allowed."

Furthermore, to write graffiti at 5 Pointz, artists must first obtain permits, which are issued by Meres. In order to apply for a permit, an artist must submit work samples, and the more famous an artist, the better the space allocated for that artist's work. All of this chafes against the essentially egalitarian, anarchic, anti-authoritarian nature of graffiti. 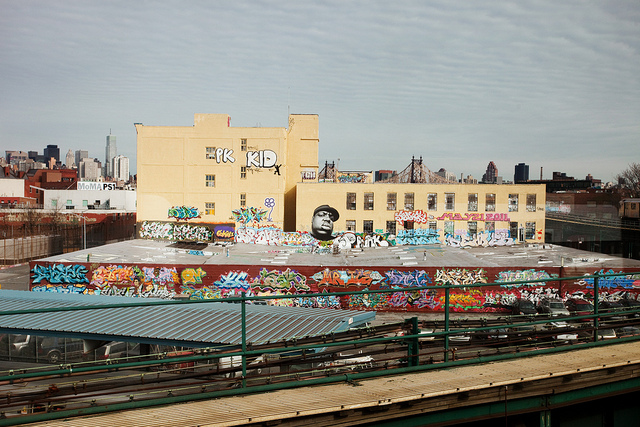 The third common grievance against bulldozing 5 Pointz is that it's a New York City landmark and we're losing something irreplaceable. Jay's response was characteristically New York: "Nothing is irreplaceable and I wouldn't call 5 Pointz a landmark."

If we want to understand why losing 5 Pointz isn't a tragedy, we need to place it within the larger historical context of graffiti in New York City.

The warehouse at the corner of Davis Street and Jackson Avenue in Long Island City that is now called 5 Pointz first became a canvas for graffiti artists in 1993, at the height of the Clean Trains Era. Forced off the trains, writers turned to the walls, both public and privately-owned.

Injured plumber Pat DiLillo, convalescing in his home in Woodside, Queens, noticed the proliferation of graffiti in his neighborhood. In 1992, he founded Graffiti Terminators, a group dedicated to stopping the spread of graffiti in Woodside. Soon realizing that he couldn't hope to prevent graffiti, he resorted instead to a widely-used public policy tactic: decriminalization. Provide a "safe space" for an otherwise illegal activity, and suddenly you can monitor and control it. Remember Hamsterdam? Same concept. Thus the Phun Factory was born, which would later be re-named 5 Pointz.

But DiLillo's plan to protect the art form by giving it a legal outlet was behind the curve. By 1993, graffiti had already begun to enter mainstream cultural consciousness. In 1983, a full ten years before the Phun Factory opened its doors, the New York Times published an article titled "Gallery View; On Canvas, Yes, But Still Eyesores," bemoaning graffiti's entrance into the established art world.

In other words, 5 Pointz may have been a symptom of the mainstreaming of legal graffiti, but it was not a catalyst; nor was it graffiti's only refuge from the zealous cultural crusaders in City Hall. By 1993, when Phun Factory opened, graffiti was safely ensconced in cultural orthodoxy and popular art galleries. Graffiti didn't need 5 Pointz to protect it.

The final argument against the demolition of 5 Pointz, is that without 5 Pointz and places like it, we're going to return to "The Bad Old Days," when graffiti vandalism was a problem.

"The Bad Old Days" are gone. The reason they were so bad was because of violent crime and rampant illegal drug use, not graffiti. Graffiti was simply the most visible target for white angst in the '70s, '80s, and '90s. Graffiti is never going to exist the way it did before. Says Jay:

I think New York has had its balls cut off as far as illegal graffiti goes. There are some notable exceptions, like JA, who is the most prolific above ground bomber in history, with almost 25 years in the game. Mostly when NY gets hit hard it's out of towners who are responsible. However, with the laws changed and the risk vs. reward factor skewed in law enforcement's favor, illegal graffiti is largely vanquished. 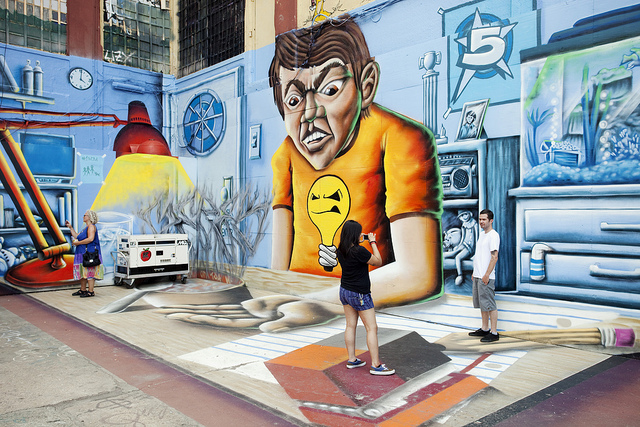 Largely vanquished, but not wholly. There are still legit writers out there. JA, as Jay mentions, has been at it for 25 years; REVS has recently resurfaced; and this month the NYPD picked up Space Invader on the Lower East Side. Writers and artists like these will continue to carry the torch for the movement. Jeff Ferrell, currently a professor of sociology at TCU, wrote in 1995, in an article [PDF] titled "Urban Graffiti: Crime, Control, and Resistance,"

The writing of hip hop graffiti disrupts this orderly latticework of authority, reclaims public space for at least some of those systematically excluded from it, and thus resists the confinement of kids and others within structures of social and spatial control.

As long as our society continues to be fractured and controlled in the manner Ferrell describes, people from marginalized and excluded groups will continue to look for ways to break that control with graffiti.

"The Bad Old Days" have gone the way of the dodo, and soon 5 Pointz will too, but good graffiti isn't going anywhere. Jay even thinks graffiti might continue where 5 Pointz used to stand: "If Meres and his supporters are so enraged by the demolition of their permission palace I suggest they wait for the condos to be constructed and then bomb the shit out of them. They have my full support on that!"

#5 pointz
#graffiti
#long island city
#meres
#street art
#the bad old days
#longform
#original
Do you know the scoop? Comment below or Send us a Tip