We've made it through 10 days of this year's New York Film Festival, and it's been a great run so far. As usual, the selection committee has picked stellar films and we've sat in on some star-studded Q&A sessions at Lincoln Center. Here are a few thoughts at the midpoint. 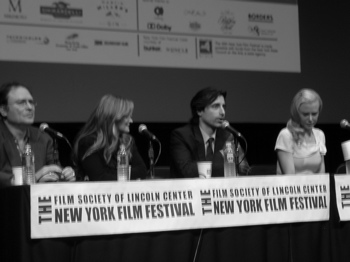 Local boy Noah Baumbach presented the follow up to his Oscar-nominated and former NYFF favorite The Squid and the Whale, Margot at the Wedding at the beginning of last week. Starring Baumbach's wife Jennifer Jason Leigh and Nicole Kidman as two dysfunctional sisters reuniting for a wedding on Long Island, Margot's familial woes are punctuated by some very funny moments of dry wit. The whole cast is very good including Jack Black, John Turturro, and Leigh, as is Baumbach's script, but Kidman's performance as Margot, a Manhattan writer with neurosis to spare, really stands out.

Some people we talked to after the film really hated her character's unfeeling attitude towards the people in her life, but we thought Kidman's ability to express Margot's sometimes despicable actions made her actually quite endearing and real. We expect to hear buzz about her performance when it gets closer to the Awards season, especially since Kidman's usually glamorous looks are well camouflaged by frizzy brown hair and mediocre clothes. Oscar loves honoring beautiful actresses who go frumpy.

Another stand out in the festival's line up was Todd Haynes' I'm Not There, his unconventional biopic about Bob Dylan. Told with six characters playing slightly fictionalized aspects of Dylan, I'm Not There tries to mimic the poetic, nonlinear storytelling technique of Dylan's songs with its narrative. With the lush cinematography, great acting and tons of cinematic allusions to directors like Jean Luc Godard and Federico Fellini, there's a lot to process while watching Haynes' film.

Of particular note are Cate Blanchett's performance as an androgynous Dylan circa '66 and the infamous Newport performance, and the spectacular soundtrack of covers and originals. There's much, much more about Haynes' movie in this last Sunday's Times Magazine article, "This Is Not a Bob Dylan Movie." 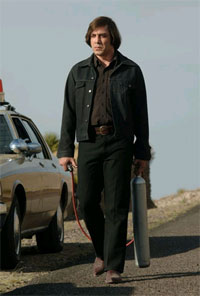 The Coen brothers new movie No Country For Old Men, which was the Centerpiece selection this past weekend, is a brutally violent and intensely scary movie. We also are giving it our early endorsement as best movie of the year, and to give some perspective, that is exactly what Gothamist thought last year when we walked out of the NYFF screening of The Queen. In this adaptation of Cormac McCarthy's 2005 novel, Josh Brolin plays Llewelyn Moss, a West Texas hunter who stumbles upon a drug deal gone bad out in the brush, and when he takes home the suitcase of loot ($2.4 million), sets off a chain of bloody events.

Javier Bardem will be haunting many a nightmare with his performance as Anton Chigurh, the hitman sent to find Moss and the cash who uses an innocuous looking air-propelled cattlegun to blow people's brains out. His long page boy haircut may look laughable, but one look from this bad dude will turn your blood to ice. Like in Fargo, the Coens brilliantly capture a stunning American landscape and the strange verbal ticks of its people with their thoughtful camera. Audiences will surely be mimicking twanging Texas accents after seeing Country, just like they did with Fargo Minnesota dialect. In addition to Bardem and Brolin's great performances, Tommy Lee Jones's portrayal as a local sheriff powerless to stop the bloodshed is profoundly melancholy.

No Country For Old Men, Margot at the Wedding and I'm Not There will all get wide theatrical releases in November. For more coverage of the fest from local bloggers check out Jamie Stuarts vlog posts on Filmmaker magazine, Andrew Grant and Aaron Hillis's podcasts with other film critics for GreenCine Daily, and coverage by The Reeler's writers.