Tonight marks the beginning of the Film Society at Lincoln Center's 45th annual New York Film Festival and oh what a jam-packed fest it is. A panel of film critics chose 30 of the best new international movies to show to New York's discerning audiences and they picked hometown director Wes Anderson's newest, The Darjeeling Limited (which also comes out in theaters this weekend) to open the festival. 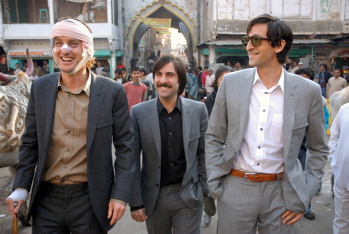 Gothamist was pleasantly surprised at how much we really enjoyed Darjeeling, especially after feeling let down by the overly cutesy The Life Aquatic with Steve Zissou. Shot in India aboard a moving train, Darjeeling has many stylized production details, like a stunning set of Louis Vuitton luggage illustrated with jungle animals the three traveling brothers carry, that have become an Anderson signature. But the movie also has some more natural, almost casually observed moments captured in the gorgeous Indian landscape. Think Satjayit Ray or Jean Renoir's The River, both major influences according to Anderson. Anderson also told a NYFF press conference audience earlier this week that the script he wrote with Roman Coppola and Jason Schwartzman relied more heavily on their three life experiences than some his previous stories and that shooting in India they realized they could make a less contrived movie because "the world their story was set in was just waiting there." It's still a Wes Anderson movie, but Darjeeling takes on some new territory which is exciting to see in the NYC auteur.

Another local boy Julian Schnabel delivers his new film to the fest, The Diving Bell and the Butterfly, based on the best selling French book written by a paralyzed man. It won Cannes and has been getting strong reviews so far. There will also be a HBO Films Directors Dialogue with Schnabel this weekend. Hopefully someone in the audience will ask him some pointed questions about his West Village architectural monstrosity Palazzo Chupi. Also of note on the NYFF roster this weekend is a look back at Ridley Scott's seminal android sci-fi, Blade Runner. In addition to showing the film, the festival will host a program discussing the influences of the movie on filmmaking and American culture called The Future Is Now: Blade Runner at 25. Another favorite at other recent festivals, Romanian director Cristian Mungiu's controversial movie about abortion 4 Months, 3 Weeks and 2 Days plays on Saturday and Monday.

If perchance you're movie plans this weekend don't include Lincoln Center some other events happening around town include a chance to get your Warriors on at the Coney Island Film Festival, a run of François Truffaut's classic of rebellious childhood 400 Blows continues at Film Forum and you can see three Hitchcock films based on Daphne Du Maurier stories at BAM, Jamaica Inn, The Birds and Rebecca.