40 Years Ago, Philippe Petit Walked On A Wire Between The Twin Towers

On August 7th, 1974—that's forty years ago today—a 24-year-old Frenchman named Philippe Petit snuck into the World Trade Center, made his way to the top, and walked across a wire cable about 140-feet long, which was strung between the Twin Towers. New Yorkers watched from below, as he performed the stunt which took him 6 years to plan. Even though his performance was illegal, charges were dropped, and Petit was merely sentenced to entertaining kids in Central Park! Here's a news report from that day:

When we interviewed Petit in 2008, around the time the documentary Man On Wire was released, we asked him about being on that wire:

Do you remember one particular moment from that 45 minutes more prominently than any other?

Well, yes and no. Of course the very first step, as you can imagine, was a giant first step. But a few moments during those crossings I remember perfectly. But that first step was a giant moment for me: I was finally stepping in to my dream. So I remember that vividly. And at some point I stopped on the wire and I sat down, and I looked down all the way - a 1/4 mile to the empty plaza below - and I stopped and saw the crowd gathering around that plaza. Yes, I remember very well many, many moments in those 45 minutes.

Can you describe at all what you were feeling when you took that first step? Yeah, I was extremely happy after all those years of dreaming and months of working on it, that now the dream was reality. And I was very concentrated and focused, in an open way, listening to everything, so that if there was a threat of some kind I would feel it. It was very delicate, because I had not seen the anchor point on the other side. Usually when I walk on a wire I inspect the anchor point on both sides before crossing. So here, my friend did it on the other side with my instructions, but I had not seen it. So it was very difficult. But after just a few steps - as I could see later from pictures taken by my friend on the north tower - I had an immense smile on my face. So obviously it was only a few steps that were fragile and delicate. 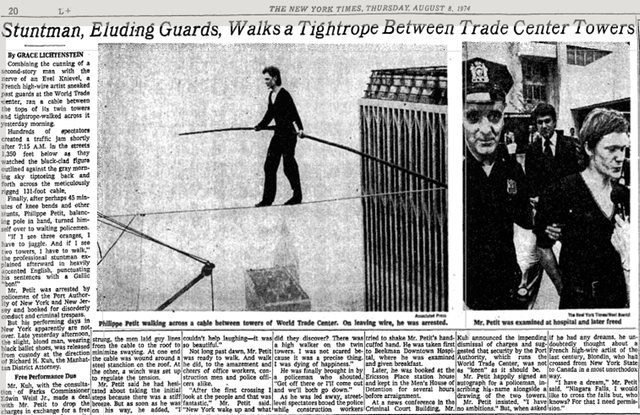 Petit didn't make it to the front page of the NY Times the following day (that honor was given to Nixon), but he did get a write-up on page 20, where it was reported that a policeman shouted: "Get off there or I'll come out and we'll both go down," during his walk.

The walk will also get the Hollywood treatment, with Joseph Gordon-Levitt and Robert Zemeckis working on a biopic. Will Gordon-Levitt have to learn to walk on a wire? In 2010, Petit taught us, and we can tell you it ain't easy.