New York City's history is filled with crazy plans that have never panned out—below, we visit four of them. 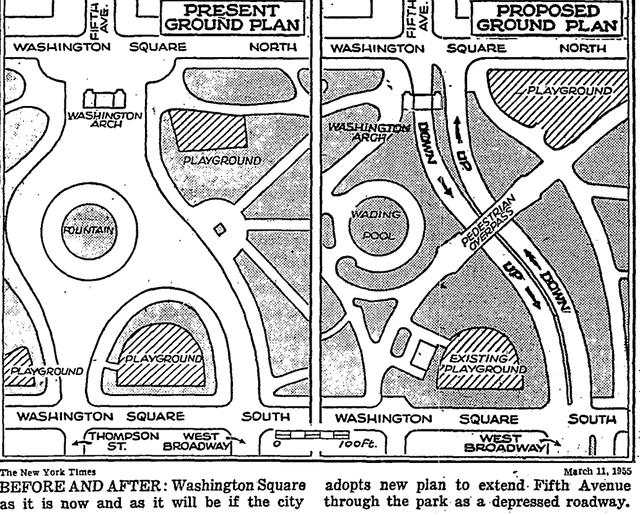 THE WASHINGTON SQUARE PARK HIGHWAY: Just as he originally wanted to build the BQE through Brooklyn Heights, Robert Moses also wanted to bring a highway through Washington Square Park... all in the name of "urban renewal." Ephemeral NY just revisited the plan, which was proposed in a few different ways through the mid-1950s, but was eventually beaten down by the little guy (in this case, the great Jane Jacobs).

The plan—which seems unbelievable—was to bisect the park "with a 48-foot-wide highway connecting Fifth Avenue to West Broadway—which would be widened and illustriously renamed Fifth Avenue South." There would be a 36-foot pedestrian bridge for people to cross the park, and as you can see from the above map: the four lane highway would have run under the arch. [via Ephemeral NY] 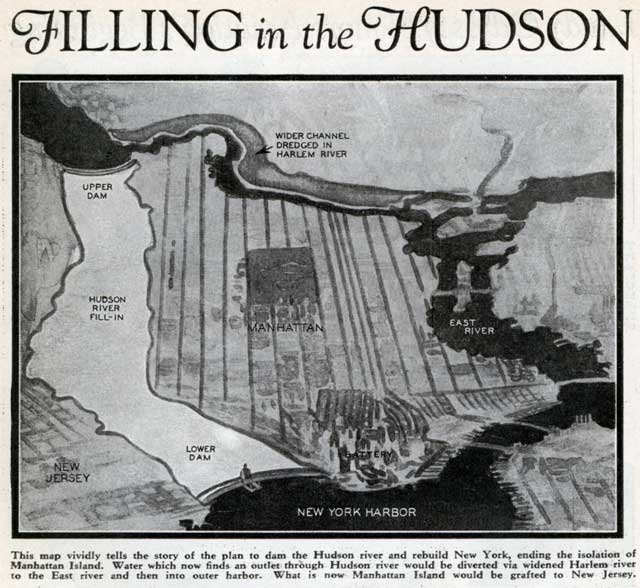 PAVE THE HUDSON In the 1930s, a plan to pave over the Hudson River was proposed. The $1 billion project would have involved plugging up the Hudson at both ends of Manhattan and diverting the water into the Harlem River, "so that it might flow out into the East River and down to the Atlantic Ocean." The drained portion would be filled, connecting the Island of Manhattan with... New Jersey!

This would have created about 10-square-miles of land, where thousands of buildings would have gone up, and roadways created to relieve traffic congestion. On top of that, subterranean tubes and tunnels were to be constructed, and underground levels would also "serve as a great military defense against gas attack in case of war, for in it would be room for practically the entire population of the city." 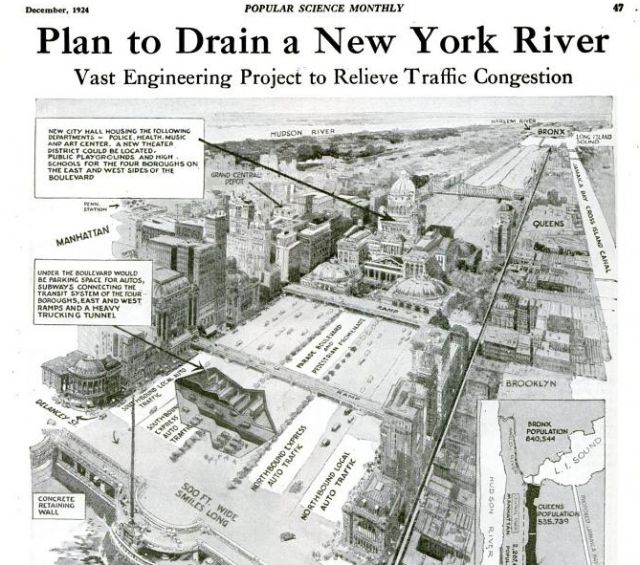 DRAIN THE EAST RIVER: In 1924, Popular Science ran an article about New York's traffic problem, which at the time was reportedly causing the city to lose over $1M a day. One proposed solution was to drain the East River and convert it into a 5-mile system accommodating roadways and the subway, while also providing parking spaces in garages and housing city centers. The idea was that of the deputy police commissioner of traffic at the time, John Harriss. If it had been carried out, there would have been a dam put up near the Williamsburg Bridge, as well as at Hell Gate... and an "imposing City Hall" would be placed midway through the thoroughfare. 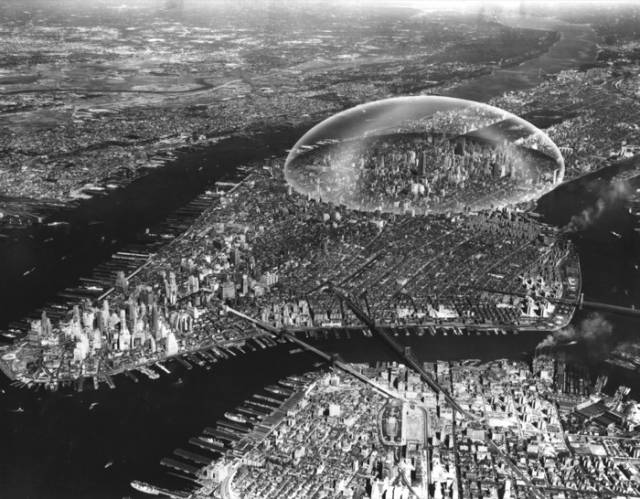 PUT MANHATTAN UNDER A DOME: What if we were a poorly received CBS drama? In the 1960s and 70s, the idea of a domed city stepped out of the science fiction spotlight and seemed like it may become a reality. One of the first real life concepts came about in 1960, when engineer Buckminster Fuller proposed a two mile "geodesic dome spanning Midtown Manhattan that would regulate weather and reduce air pollution." He planned the project with architect Shoji Sadao, and it would have covered the island from the East River to the Hudson River, from 21st Street to 64th Street.

The plan was for the giant dome to reduce cooling costs in summer and heating costs in the winter. Buildings would not be heated and cooled separately, instead the entire dome would be kept at a moderate temperature level. Presumably, in-dome apartments would have higher rents! Fuller believed the dome would eventually happen once he nailed down what materials to use, and said funding would be offset by the savings to the city—he wrote, “the cost of snow removal in New York City would pay for the dome in 10 years."

In 2008, when The Whitney revisited his designs, and The New Yorker did as well, Elizabeth Kolbert wrote, “By staging the retrospective, the Whitney raises—or, really, one should say, re-raises—the question of Fuller’s relevance. Was he an important cultural figure because he produced inventions of practical value or because he didn’t?” You can find more of the ol' Buckminster's designs right here, and don't forget to check out the floating cities he started to design after the dome era faded.

#washington square highway
#dome
#hudson river
#east river
#original
#history
#flashback
Do you know the scoop? Comment below or Send us a Tip