$25,000 Will Buy You A Pedestrian Bridge To Governor's Island (IN THEORY)

It's been two years since we heard about that magical pedestrian bridge that would connect Governors Island to Red Hook, which is apparently just a four block walk. Now artist Nancy Nowacek is trying to make her idea a reality, and is fundraising via Kickstarter. There are new renderings, a new name (Citizens Bridge), a team in place, and just $25,000 (and we imagine a lot of permits) stopping them from building their floating bridge across Buttermilk Channel.

She explains on her Kickstarter page that this would be "the first citizen-built and longest temporary bridge in New York City history." The floating pedestrian bridge aims to "reclaim the city’s waterways as public space... Citizen Bridge will offer participants an experience of the New York City harbor unlike any other. It is designed to create an intimate experience of being with the water, rather than seeing it from the shore, above from a bridge, or in transport by boat or ferry." Speaking of boats and ferries, don't they use this waterway, too? Even with companies like Two Trees behind you, can this thing happen? These aren't questions that have been answered yet, but it's noted in there that "we have learned the concerns of those that manage traffic on the waterways."

If you scroll allllll the way down on that page, you'll also see this note about risk: "Because Citizen Bridge defies standard permitting categories, obtaining the necessary permits and/or insurance for this phase of the project may cause unforeseen delays." The waterway is also used by boats, which is making this project seem impossible, especially with a brand new marina opening a stone's throw away.

We're not trying to kill an artist's lovely pedestrian bridge dreams, but we've been burned by these things before. 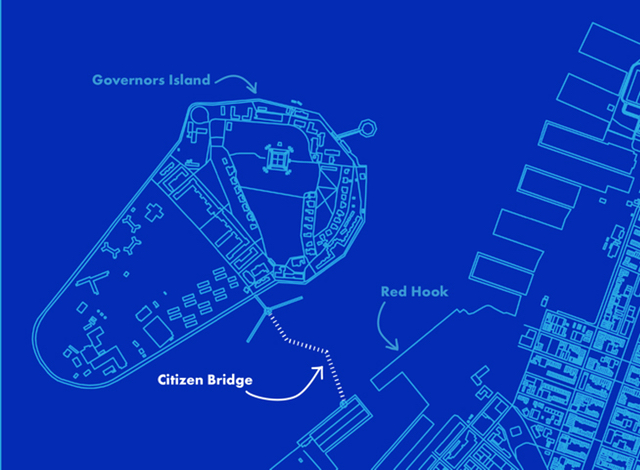 #citizen bridge
#floating bridge
#governors island
#kickstarter
#Nancy Nowacek
#pedestrian bridge
Do you know the scoop? Comment below or Send us a Tip