It's Winged Animal Week here on Gothamist, so please feast your eyes on these magnificent peacock photos from inimitable photographer Katie Sokoler. She shot the peacocks on the campus of The Cathedral Church of St. John the Divine in Morningside Heights, where three of these remarkable creatures roam the grounds—which are open to the public! 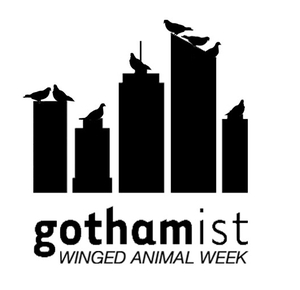 A spokesperson for the church, Tenzin Dharlo, tells us the campus is blessed with two "regular blue peacocks" named Jim and Harry, and a white peacock named Phil. "People think he's albino, but he's not," Dharlo explains. The peacocks, each named for clergymen at the cathedral, arrived in 2002, but the first peacocks were donated in the '80s by the Bronx Zoo. Animals, as you may recall, are beloved at the church, which holds a big "blessing of the animals" event every year. (Oh look, there's Edie Falco carrying a freaking kangaroo down the aisle!)

13 acres surround St. John's, and the peacocks are given free reign, feasting on a assortment of seeds, mostly of the sunflower variety. "They screech a lot," says Dharlo. "We like to think of the peacocks as prognosticators of Spring, because we've noticed that around Groundhog's day they start opening their tails—and if they do it early we think spring is coming."

You can marvel at the peacocks free of charge on the Cathedral grounds (1047 Amsterdam Avenue), which are open daily during daylight hours.

#church of st. john the divine
#peacocks
#winged animal week
Do you know the scoop? Comment below or Send us a Tip