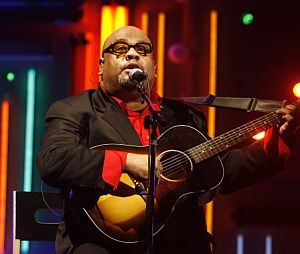 The 2008 Tony Award nominees were just announced, and looking over the list we’ve got to admit that it was a pretty good year for Broadway, at least in terms of quality. The phenomenal rock musical Passing Strange picked up seven nominations, including Best Musical, Best Original Score, and Best Lead Actor (Stew, pictured). Also competing in the Best Musical category are the tepidly received Cry-Baby, the harmless Xanadu, and the underdog Latino musical In the Heights.

The rapturously received (though not by Gothamist) August: Osage County picked up five nominations on the way to its inevitable apotheosis as a Hollywood movie. It squares off for the Best Play Tony against Tom Stoppard’s Rock ‘n’ Roll, Conor McPherson’s The Seafarer, and the fast and funny The 39 Steps.

The riveting revival of Harold Pinter’s The Homecoming received three nominations – Ian McShane was passed over for Best Leading Actor, but the real magic in that production came from Eve Best and Raúl Esparza, who both received nominations. Sunday in the Park with George faces stiff competition in the Best Revival of a Musical category from South Pacific and Gypsy; Grease doesn't stand a chance.

The nominations and awards are the last hope for a critically acclaimed show like Passing Strange, which has been playing to less than 50% capacity. As the Playgoer recently pointed out, this past season has been a rough one for Broadway, and it’s hard to blame it all on the stagehands’ strike; currently 18 of the 37 shows on Broadway are less than 70% full. According to Crain’s, overall attendance has dropped 3.5%.

The 2008 Tony Awards ceremony will be held at Radio City Music Hall in New York City on June 15th, and hosted by Whoopi Goldberg. Stephen Sondheim will be honored with a lifetime achievement award during the event, which will be broadcast on CBS.

#awards
#broadway
#musical
#nominee
#passing strange
#play
#show
#theater
#tony awards
Do you know the scoop? Comment below or Send us a Tip
A new Gothamist is coming! We’ve moved comments over to our beta site. Click here to join the conversation and get a preview of our new website.