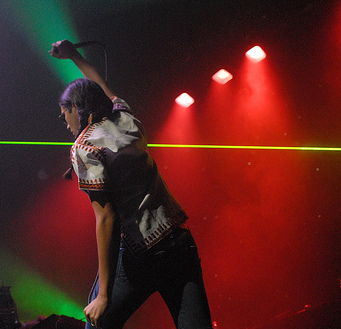 We checked in with some folks recently for a little end of '07 "exit interview" before we enter a new year. It's safe to say that our first subject in this series had a pretty big year with his band Ghostland Observatory (let's just say they've certainly outgrown our Movable Hype shows). With a new album coming out in March, they're poised for world domination in the 2008.

How will you celebrate New Year's Eve?
My wife and i will be packing and moving into to our new house!!!! HALLA!!!! Party animals over here!!!!

Any resolutions going into 2008?
Spend more time with my family and friends.

What trend do you think will be "big in '08"?
I think the new trend of 2008 is going to be cell phones installed into your molars.