The new Broadway production of 1984 is now restricting the ages of audience members. According to an announcement from the producers, the play "will implement, effective immediately, an Age Restriction Policy: No theatergoers born after 2004 will be admitted to 1984."

The release added, "The Age Restriction policy is being implemented due to the intensity of the production, which includes several scenes that are graphic in nature and have disturbed younger patrons."

Last month, one of the play's stars, Olivia Wilde, tweeted: 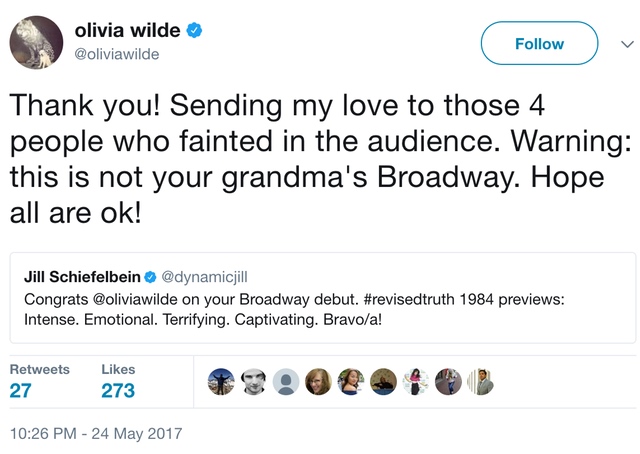 The production, adapted from George Orwell's dystopian novel by Robert Icke and Duncan Macmillan, comes from England, where it was critically acclaimed; the Guardian noted, "The lighting, sound and video design... both shock the senses and achieve swift transitions between past, present and future," while a critic for the Evening Standard wrote, "The set, initially a book-lined, wood-panelled room, is ably supported by some superior video design from Tim Reid. Jagged bursts of neon strip lighting interrupt scenes interrogation-style and I found my heart beating ever more quickly with the drip-feed of anxiety generated by the jangling, ominous atmosphere."

One audience member who saw the Broadway production this week confirms the show is extremely intense. "I thought it was really well done, but it was hard to watch at times," said theatergoer Tanna Kimmerling. "They assault you with loud noises and flashing lights so you feel like you are just as panicked and confused as Winston. It gets pretty grotesque at the end—I had a nightmare about it, and I'm 30."

An LA Times critic who saw the production explained, "The production, adapted and directed by Robert Icke and Duncan Macmillan, eradicates any lingering classroom aroma with an ominously propulsive sound design (by Tom Gibbons), disorienting strobe lighting effects (by Natasha Chivers) and video (by Tim Reid) that both expands the playing area and reminds us that Big Brother is always watching," and one from the Independent remarked that the audience audibly gasped multiple times.

To be sure, the age restriction announcement may just be the latest in Broadway's long history of publicity stunts. On the other hand, the production is, by all accounts, not for the faint of heart. Even the cast has taken a beating; Wilde said on Twitter that the play is so "NUTS" that she busted a lip and broke co-star Tom Sturridge's nose.

#1984
#broadway
#fainting
#olivia wilde
Do you know the scoop? Comment below or Send us a Tip