The above map shows just how connected Brooklyn used to be via a system of streetcars. The Brooklyn Historic Railway Association's Bob Diamond explained to us this morning, "The streetcar routes (solid lines) were shut down in stages from 1930 through 1956. The dashed lines were electric bus routes, which feed the streetcar lines, which in turn fed the subway system. It was called an all electric integrated urban transit system."

While there has been some real talk about bringing the system back to life (on a scaled back level) in the recent past, the effort never seems to make any real headway. The main man behind the fight is Diamond, who has hit several obstacles in the past. Which is not surprising given the history of these things. 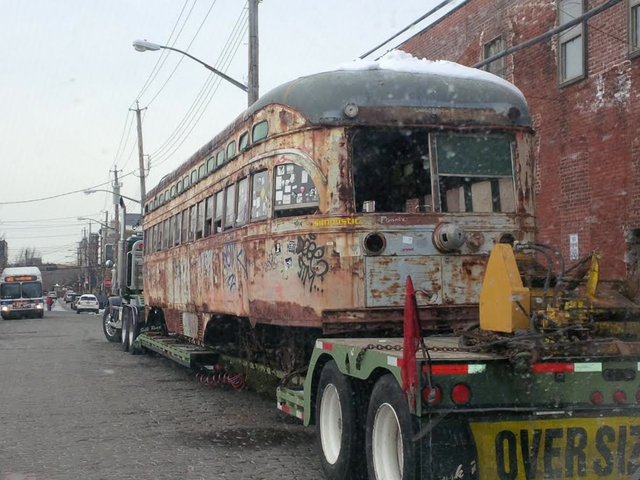 The trolley system in New York City has a long and complicated story, and it's not just us—this extends all the way to Los Angeles. In 1987, 60 Minutes addressed the entire U.S. streetcar industry, and its eventual destruction. Thanks, General Motors!

According to Diamond, here's the gist of what went down: "In the mid 1920s General Motors, Standard Oil, and Firestone Tires—noticing that the privately held, long term electric streetcar franchises all around the U.S. were up for renewal—wanted to expand their business opportunities by forming a 'shill' Holding Company called National City Lines. Using every form of legal and illegal tactics, such as murder, blackmail, and the bribing of elected officials, NCL gained control over forty Streetcar companies around the U.S.

"Their very first victim, was Manhattan's NY Railways, the operator of that borough's profitable electric streetcar system. In a pattern to be repeated all around the U.S., NCL gained control of the streetcar franchise by bribing elected officials, and immediately ripped out the tracks, wires, and streetcars, replacing them with GM busses (formerly their Yellow Coach Div., now called Nova Bus, located in Canada in the very same GM bus factory), burning Standard Oil gasoline (later diesel), and rolling on Firestone tires."

Murder? Diamond points us to this book, "which documents a Midwest reporter who was machine gunned to death in front his home, in the presence of his wife and 5 year old daughter, because he threatened to expose the NCL conspiracy."

The 60 Minutes segment goes pretty in depth into how every city in the U.S. used to have have clean and efficient streetcars, and how the system eventually fell—you can watch it here. And below, a look at them up and running back in the '30s.

#bob diamond
#map
#streetcars
#trolleys
#original
Do you know the scoop? Comment below or Send us a Tip