17 Things In NYC That Are Okay, We Guess

Earlier this week a semi-accurate list of the worst places in NYC floated around the Internet. And though one might counter all that negativity with a list of the best places in New York, it seems far more prudent to list some of the city's most "meh" spots. Not everything here is GREAT (though a lot is), but there's joy even in mediocrity—your crappy local sushi joint might keep sending you brown avocado, for instance, but you still order from there, because it's cheap, convenient and wholly yours. Anyway, here are some of the most mediocre things in town; feel free to leave your favorites in the comments.

THE METS: Somehow the Mets have become New York's most beloved baseball team, but for lifelong fans, this team brings nothing but pain. Not that the Mets are terrible, but they almost never make it into the playoffs, they haven't won a World Series in my lifetime, their most important team members' limbs seem to be flinging off left and right, and they have a tendency to give up six-run leads in the eighth inning. Mets fans learn a lot about disappointment, but also they never give up.

Of course, this could be said for most New York sports teams. I haven't paid attention to the Knicks since Space Jam came out on VHS, but I hear they are not very good. The Giants are okay? I think there is another football team that is also okay? The Nets are pretty fun, but they are new and shiny, and will soon lose their luster. There's a lot more to do in New York than watch sports, but if you do you can day drink and eat cool snacks.

ANY DUANE READE: Duane Reade is not the best chain drugstore in New York (though it's better than Rite Aid, where I once saw a rat in the aisles). It has a very colorful nail polish display and occasionally awards you $5 off your purchase if you have that card thingie, which is nice. Duane Reade is also more expensive than CVS, doesn't stock my favorite hair gel, and still doesn't have self-checkout, which makes buying condoms awkward. But even though Duane Reade is merely fine, it's also native to New York. CVS is from Massachusetts. Boston is in Massachusetts. People who shop at CVS instead of Duane Reade should be sentenced to Boston. 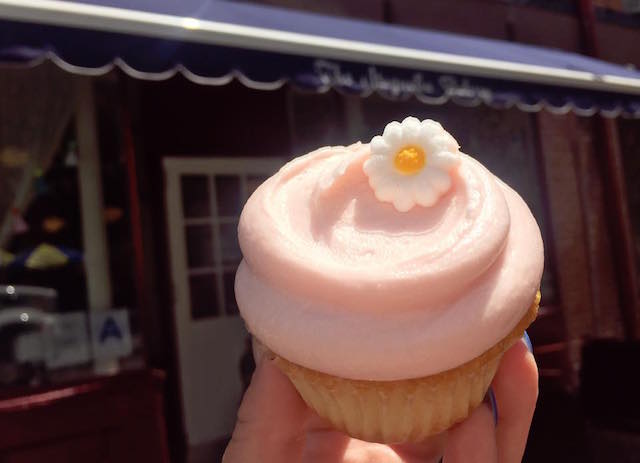 MAGNOLIA BAKERY: Magnolia struggles hard with the frosting-to-cake ratio on their cupcakes, but they make a mean banana pudding. Magnolia is okay.

HARU SUSHI: Haru Sushi is a moderately priced sushi chainlet that happens to have an outpost close to where my parents live. You can order California Rolls and salmon avocado rolls for, say, $5 or $6, or get something fancier, like a Rainbow or Dragon roll, for $15 or $16. Haru Sushi doesn't make the best sushi in the city or even the best sushi in my parents' neighborhood—that award goes to Sushi Yasaka—but you can usually get seated at the sushi bar quickly, they deliver, and they'll give you extra ginger if you ask. There are six Haru Sushis in Manhattan, but If you do not have one within your delivery zone, this city is full of middling sushi you can order on Seamless.

CHINESE MUSICIAN RESTAURANT: One Gothamist staffer made the argument this week that the Chinese food in New York is overrated. It is true that the Americanized lo mein and such that we eat here isn't anything spectacular on its own merit, and all that sodium and sticky sauce sits with you for a few days even if you're hungry ten minutes after eating your meal. Still, it's much tastier than the glop you get in, say, Baltimore, where the only good Chinese food joint had a 917 area code.

Here's a story about the Chinese Musician, my favorite cheap Chinese food joint in my old neighborhood. A friend of mine saw people waiting outside wearing suits and nice clothes, and, assuming it was a hopping joint that required diners to dress to the nines, insisted her roommate don club wear to eat there. Turns out, though, that it's just next to a funeral home. Anyway, they deliver.

THAT ICE CREAM TRUCK THAT DRIVES DOWN CENTRAL AVENUE IN BUSHWICK: Ice cream trucks do not serve the best ice cream in New York, sometimes they engage in turf wars, and this particular truck lodges "Pop Goes The Weasel" in your head for weeks on end. But, you know, sometimes you just want a $4 vanilla soft-serve cone with rainbow sprinkles, and this baby delivers that dream.

CALEXICO: We've put Calexico on "best" lists in the past, but the truth is, Calexico is not actually the best. The burritos are huge and well-packed, and I gained like 6 pounds when I moved just a few blocks from the Greenpoint Calexico, but a) the Mexican food here is just good, not great, and b) they once delivered me a burrito bowl instead of a real burrito and I have never forgiven them for this. Take away their glorious crack sauce and what are you left with? CalMEHxico, amirite?

BODEGA BAGELS: Bodega bagels are not nearly as good as real bagels, but they'll suffice when you have a wicked hangover and discover your local bagelry was just awarded a C rating by the Health Department.

MOMA: One of the biggest friend fights I've ever had was over The Met versus MoMA, and here's my two cents. While MoMA has some great shows, a lovely garden, and throws stellar parties, once you've seen the permanent collection a few times, at $25-a-pop it's not really worth repeat visits. The Met, meanwhile is the kind of museum that gifts you with a new discovery every time you go back—my grandmother has been to The Met hundreds of times at this point, and just last month she stumbled into a room filled with medieval plates that she'd never seen before. The Met has more than one temple. The Met has a Chinese garden. The Met harbored runaway children (in fiction). The Met is magical and MoMA has pointy statues. 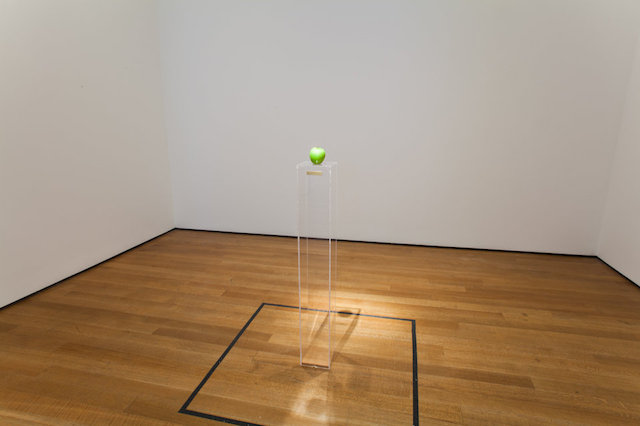 YANKEE STADIUM: The old Yankee Stadium had a sort of crumbling charm, but the new stadium, which cost $2.3 billion to build, is just kind of...grey. Stadiums like Wrigley Field, Camden Yards, and even—ugh—Fenway Park have character, but the only thing interesting about Yankee Stadium is that the Yankees play there, and even that's fairly shrug-inducing these days. As one Gothamist staffer puts it: "Yankee Stadium is a very functional building in which to hold a baseball game, but nothing more." At least Citi Field has a Shake Shack.

THE BOWERY BALLROOM: Bowery Ballroom isn't nearly as hellish as, say, Terminal 5 or Webster Hall, but it lacks the classic charm you'll find at, say, the Beacon and Kings Theatres. On the other hand, the sound is good and Uncle Boons is nearby, so maybe I'm just bitter about the death of Death By Audio. Fun fact: John Del Signore once got thrown out of the Bowery Ballroom for sneaking in a beer, those fascists.

WASHINGTON COMMONS: Washington Commons is a bar located near my apartment. It serves $5 cups of wine, $6 beers, and $4 Bloody Marys on the weekends. There is a television that usually plays old movies, and a backyard where most of the benches are not broken. More importantly, if I am at this bar while one of my roommates locks themselves out of our apartment, I can run home, let them in, and return to drinking within 15 minutes.

There is nothing uniquely great about Washington Commons, and you probably won't go out of your way to patronize it if you don't live in Crown or Prospect Heights. But no matter how mediocre the bar down the street from your apartment may be, it should still be your favorite bar, i.e., the best bar in New York is the bar that will basically feed you beer through your window. It is also important to note that I actually intended to include a different bar near me in this post, but that one was so mediocre I didn't even realize it closed. 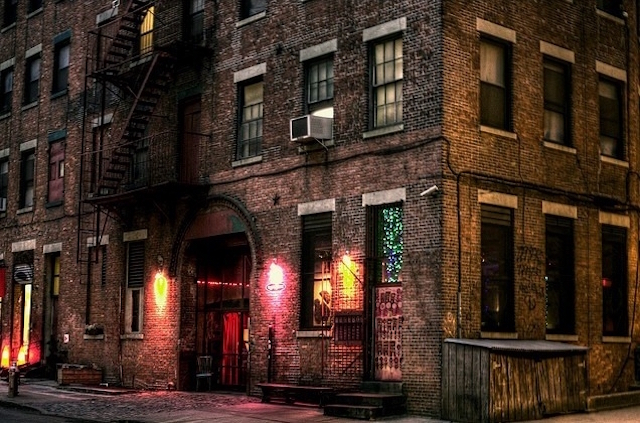 SUPERFINE: This DUMBO bar is the post-work version of Washington Commons—it's one of maybe three bars in the neighborhood, it has a decent happy hour, there is a free pool table, and they serve shoestring french fries. Superfine is Gothamist staffer Ben Yakas's favorite bar, probably because of the aforementioned pool table, but Superfine, much like your typical post-work happy hour spot, is just fine.

SOHO: Once upon a time SoHo was hip, but now it has a Chobani store.

1 WTC: It's nice that the World Trade Center's coming back to life at last, but while the Woolworth Building, Chrysler Building and Empire State Building boast an old-world romance, architecturally, the city's tallest building is kind of boring. Cool view, though.

CRONUTS: I like looking back at the Cronut's heyday because 2013 was fun. There was the mayoral election, for instance, with all the Anthony Weiner scandals; Marc Yearsley wrote about waiting on line for the Rain Room, and I went to Europe for the summer. But while I'd eat a Cronut if it were on my desk right now, I wouldn't wait on line for one, and Dominique Ansel makes some much better treats.

#cool
#eh
#i guess
#mediocre
#meh
#rebeccas corner
#shrug
#sure
#whatever
#why not
#original
Do you know the scoop? Comment below or Send us a Tip