Grab a tissue: the last month of summer is sadly upon us. But with bad news always comes good news. August is jam packed with exciting events as people are trying to make the most of the end season - so here’s your chance to enjoy it to the max. A secret speakeasy party (well, guess it’s not a secret anymore) was never a bad idea, nor was a picnic at Governor’s Island while getting a dose of history 101. It’s time to get your final bouts of sunshine before the cold weather creeps back up on us.

EXCLUSIVE AFTER-WORK ROOFTOP PARTY
Cantina Rooftop was made for parties and they don't get much bigger than Quiet Clubbing. When the silent disco specialists take over the outdoor space, it'll be time to start sinking cold beers and frozen margaritas. At 7pm, the headphones go on and the dancing begins, with three DJs spinning everything from '80s to hip-hop. Pick a channel you like, hit the dance floor, and start cutting some shapes.

Post-work is getting on the dance floor with YPlan on August 5th; $5 [includes headphones].

WEBSTER HALL PRESENTS HOT CHIP + MUSEUM OF LOVE
British as hell and as lively as a bag of ferrets, Hot Chip are a force to be reckoned with. The London electronic stars are six albums into a glittering career that's spawned a slew of hits. With tracks like "Over and Over" to call upon, Webster Hall will be bouncing when the English synth-popsters start pushing buttons.

The rock show kicks off with YPlan in the Grand Ballroom at Webster Hall on August 5th; $47.

BURLESQUE SAIL ABOARD THE CLIPPER CITY
Everything's better on a boat. Yep, even burlesque. Join Rosie Cheeks, Jenny Rocha, Lil Miss Lixx, and host Albert Cadabra for a night of French-inspired sauciness on the high seas. DJ Saiko Mikan will be spinning Japanese ye-ye, British pop, and '60s garage rock while the revelers dance hard and stare harder at the naughtiness on display.

The French Ye-Ye naughtiness sets sail with YPlan from the Battery on August 6th; $53.10.

GOVERNOR’S ISLAND GROUP TRIP: HISTORY TOUR, LUNCH EXHIBITS + EXPLORE
There's a whole lot of history locked up on Governors Island. Long before Manhattan snaked skyward, the island in the bay was home to Native Americans. Later, the Dutch and British staked a claim. Catch the ferry to Governors Island where your guide will lead you through its most venerable buildings. Then it's picnic time with the group before making the short trip back to Manhattan.

The history education gets down to it with YPlan at Battery Maritime Museum on August 8th; $15 [includes ferry ride; please bring picnic food]

WEST SIDE SUNSET PARTY TOUR
When the sun goes down, New York’s party people come out to play. The fun begins at Battery Gardens Cafe’s beer garden, where there’ll be drinks promos and a grill menu. Then it’ll be time for a spot of bar hopping along the Battery Park Promenade, with ample opportunity for dancing, drinking, and partying hard. The tour winds up near the World Financial Center, with an epic view to crown an epic night.

Catch a wicked sunset at this downtown promenade with YPlan on August 8th; $8 [headphones included].

TENEMENTS, TALES + TASTES TOUR
New York is a city of immigrants whose stories are woven into its cuisine and culture. This Lower East Side walking tour will wind its way through the narrow streets that make up Kleindeutschland, Chinatown, and Losaida. Take in the sights, sounds, and aromas as you learn the history and sample five delicacies of multicultural New York.

Munch on delicious delicacies from these historical districts with YPlan starting from August 4th; $52 [includes food].

SOUTHSIDE JOHNNY + THE POOR FOOLS
Pick an artist or genre, and Southside Johnny & The Poor Fools will play it. The band's electrifying renditions of great American music range from Muddy Waters to Bob Dylan. Rock and blues, soul and jazz: if it's got rhythm and groove, Southside Johnny and his band of renegades will shake it up and spit it out in consummate style.

Kick back and listen to Americana sounds galore with YPlan on August 9th at City Winery; $35.

SHHH...IT’S A SPEAKEASY
Rising Sun Performance Company invites you to enter the world of Charlie's speakeasy. Quipped with a casino, free-flowing booze, wicked card players, and red hot jazz, this immersive experience allows you to mingle with the sordid characters of the 1920s underworld. So for one night only, come dressed in your best Roaring '20s costume, sip your favorite bubbly, and let the secret debauchery reign the night.

Throw it back to the Prohibition Era and wear your ultimate flapper and gangster costume with YPlan on August 10th; starting from $18 [includes drinks + snacks; VIP tickets include reserved seating].

ON THE RISE: NEW MYTHS, BRAEVES + PARROT DREAM
New York's emerging talent is given a chance to shine at Le Poisson Rouge. On The Rise champions up-and-coming musicians who've been tipped the top. Bands like New Myths, a female trio with a touch of Joy Division about them. Also on the bill are melodic Long Island outfit Braeves and dream pop four-piece Parrot Dream.

The rhythms are endless at Le Poisson Rouge and YPlan on August 11th; $10.

BARS + CRAFTS: MAKE YOUR OWN MOSAIC LANTERN
Question: why have you never attempted to make your own mosaic tiles? Seriously, homemade tiles are awesome. Your design. Your colors. Your skills. Oh, and they're not technically homemade: you'll actually be making them at the bar. Use the tiles to create a lantern or deploy them any way you see fit. Bars and crafts are a match made in heaven.

Get crafty with YPlan at this favorite East Village spot on August 11th; $29 [includes supplies]. 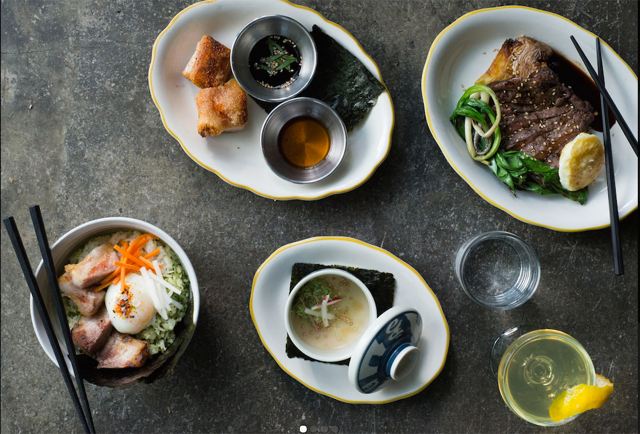 BARA: 9 DISH FRENCH-JAPANESE IZAKAYA FEAST
Bara is the critically-acclaimed French-Japanese izakaya hybrid brainchild of Chef Ian Alvarez. Get ready for artfully constructed dishes that showcase a range of bold flavors and unexpected sauces. Think enoki dashi with pistou and green tea steeped au jus. All Tasting Collective Feasts are communal with the dishes served family style, and the chef will come out to interact with guests and provide the narrative behind the food giving you a chance to meet the man behind the masterpieces.

#sponsored post
#yplan
Do you know the scoop? Send us a Tip