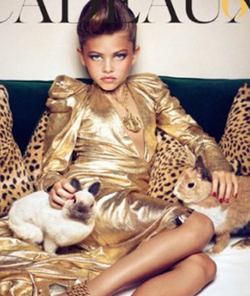 A French model is causing a stir thanks to a "bad person in the U.S.A."... and also because she's only 10-years-old. Thylane Loubry Blondeau has been posing and posturing amongst the industry's elite, but many think the young girl is being pushed too far, getting a little too grown up for photo spreads in magazines like French Vogue. Lest we forget, Brooke Shields was just 10-years-old when this controversial photo was taken, and that controversy has stuck around for decades. Blondeau's mother Veronika Loubry allegedly defended her daughter on Facebook, saying:

hey guys im the mum of thylane something going ‘s wrong at the moment with thylane and bad personn in usa about pictures she make's 8 months ago for vogue ,,thylane doesn't know about the buzz and i want to protect her from the deapest of my heart ,,, she's so young ,, so we are going to close this accompte for a while ,,i know all of you are good person who like her so i send you a big kiss,,thanks

The Facebook page still appears to be active, however, with plenty of photos of the child acting like an adult. Should 10-year-olds stick to playing dress up?

The fashion industry seems to be getting younger and younger as a whole, with teenagers taking over as designers, fashion writers, and models (Dakota Fanning's 13-year-old sister is the new face of Marc Jacobs). Of course, the fashion industry is teeming with possibly age-inappropriate things like babikinis and padded bras for 7-year-olds, too.

#10 year old
#controversy
#French Vogue
#model
#Thylane Loubry Blondeau
#vogue
Do you know the scoop? Comment below or Send us a Tip