10 Facts You May Not Know About The Upper West Side

A few months ago, I met an old woman on West 83rd Street who told me, "If New York is the center of the world, then the Upper West Side is the heart." I am biased, having grown up in the neighborhood, but I must agree—though today the UWS seems synonymous with banks, rat infestations, and rich people, it is still an architectural, intellectual, and even cultural jewel, with or without H&H Bagels. Here, we present ten little-known facts about that beautiful stretch of land by the park—feel free to tell us more in the comments.

1. A village comprised mainly of black landowners was torn down to make room for Central Park. Before the brownstones, banks and Duane Reades moved in, the neighborhood was a "barren, open land marked with occasional shanties, vegetable gardens, menacing rock outgrowths, lowly taverns, and decrepit eighteenth- and nineteenth-century country mansions," per Bricks & Brownstone. In fact, Morningside Heights—now considered its own neighborhood, but once included in the Upper West Side—was famously rural farmland during the Revolutionary War.

As for the aforementioned shanties, from 1825 to about 1857 several hundred people lived and owned land in Seneca Village, a small, safe enclave founded by free black folks that was located from 82nd to 89th Streets near 7th and 8th Avenues. When construction began on Central Park in the mid 1850s, however, Seneca Village was torn down and its population displaced—many tenants moved farther west, where they lived in poorly-constructed homes and lean-tos. 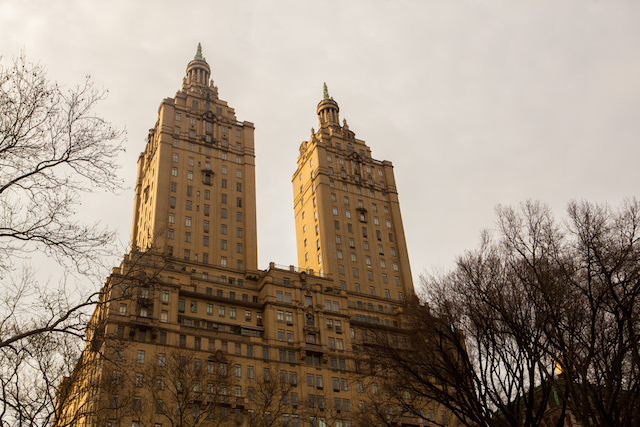 2. The San Remo and Beresford were sold together for $25K during the Great Depression. The Upper West Side is filled with ornate, elegant and famous apartment buildings, including the El Dorado, the San Remo, the Beresford, the Ansonia, and the Dakota. Both the San Remo, located at 145 Central Park West, and the Beresford at 211 Central Park West are synonymous with landmarked Upper West Side luxury, boasting $10 million+ apartments with sweeping park views and celebrity residents. But once upon a time, things weren't so swanky. In fact, when the two buildings were completed right around the start of the Great Depression—the Beresford in 1929, and the San Remo in 1930—they had trouble finding stable owners and the San Remo devolved into bankruptcy.

By 1940, both buildings were sold in a package for only $25,000—today, you probably can't get past the doorman if you have any less than that in your checking account. 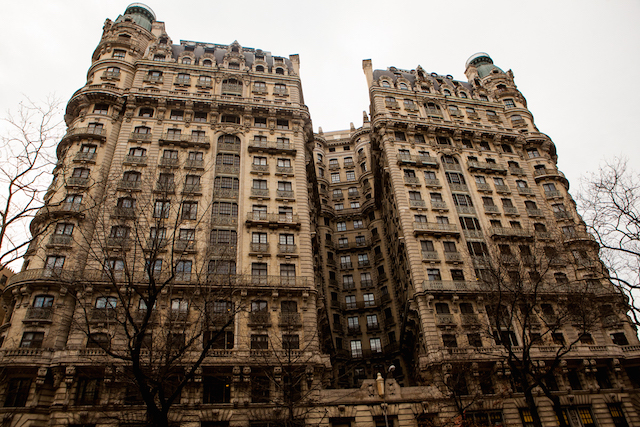 3. The 1919 World Series was rigged in The Ansonia: The Ansonia, considered the "grandest hotel in Manhattan" when it debuted in 1904, has had a long history when it comes to baseball—Babe Ruth stayed there so much he reportedly "thought of the entire hotel as an extension of his apartment," and the hotel played host to New York Yankees like Wally Schang, Lefty O’Doul, and Bob Meusel.

Still, one of the coolest pieces of Ansonia-related trivia is that in September of 1919, a handful of Chicago White Sox players met in then-first baseman Chick Gandil's room at the hotel and agreed to team up with some gamblers and throw the World Series against the Cincinnati Reds. That fix has since been dubbed the infamous Black Sox Scandal, and has made its way into literature and film like The Great Gatsby, Eight Men Out, and Field of Dreams. 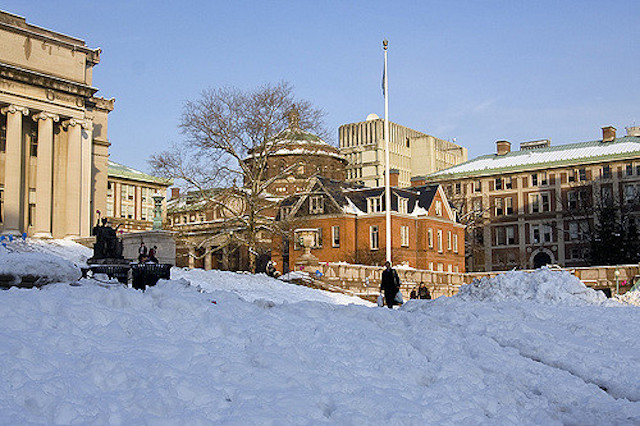 4. Columbia University is situated on the site of a former insane asylum. Long before students started operating pop-up restaurants in their dorm kitchens, 116th Street and its surrounding 26 acres played host to the Bloomingdale Insane Asylum, which operated from 1821 to 1892. The facility was the first of its kind in the state, and the care its patients received was questionable indeed. In 1872, journalist Julius Chambers infiltrated the asylum and wrote a number of articles for the New York Tribune documenting a series of abuses, including that of "venerable blind men beaten by enraged keepers," "instances of brutal treatment," and "scanty and foul food, filthy baths, and rude and vulgar attendants."

Columbia bought the property in 1892 and briefly used some of the asylum's buildings, but today all that remains is Buell Hall. Buell, which sits next to Low Memorial Library, was once where the wealthy male patients were treated but now serves as the home of the French cultural house, among other things. 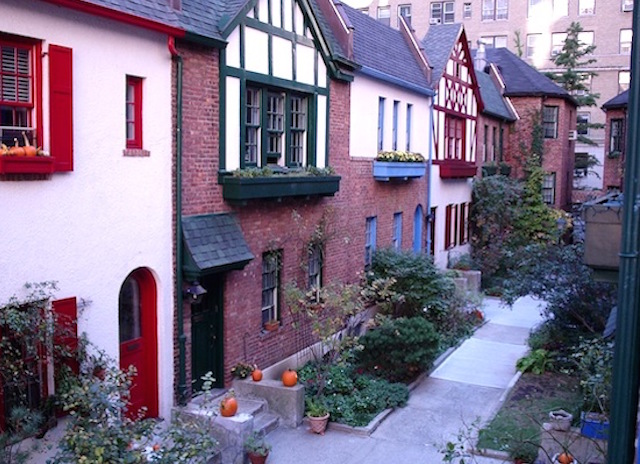 5. There is a tiny Tudor village on West 95th Street. The Upper West Side is littered with beautiful brownstones and pre-war apartment buildings, but if you manage to make it behind an iron gate on West 95th Street near West End Avenue, you'll find yourself inexplicably transported to a tiny movie set-like street lined with adorable Tudor-style homes. Here lies Pomander Walk, a block-long complex built in 1921 and modeled after the London stage set of a play by the same name.

The complex boasts 27 homes (broken down into 63 co-op apartments), elegant street lamps, and beautifully-manicured shrubbery and flower boxes. The bad news is, you can't just stroll through this sleepy English village, since only residents (which have included Humphrey Bogart, author Darryl Pinckney, and His Girl Friday star Rosalind Russell) have access to the enclave. 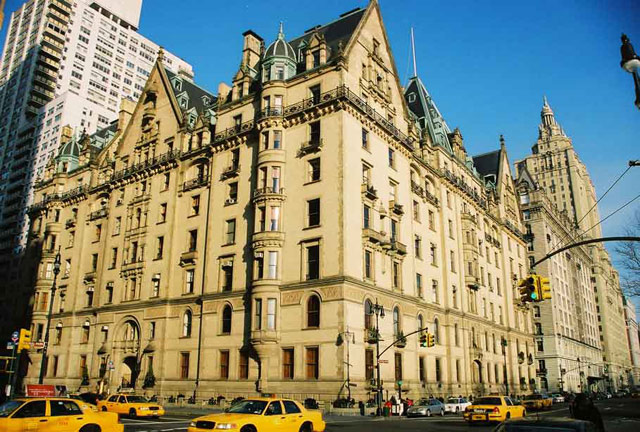 6. The Dakota is haunted. Okay, not everyone's going to back me up on this, I understand. But for those who seem inexplicably drawn to Hollywood Medium (and may be Rosemary's Baby fans), these are the FACTS: the 132-year-old building is haunted by a slew of spirits, with ghoooooostly sightings including that of a little girl with long blonde hair, a 10-year-old boy in a Buster Brown suit, and (of course) the ghost of John Lennon, which has been spotted by a number of residents including Yoko Ono.

Even Lennon himself reported paranormal activity in the building, once spotting a ghostly figure he dubbed The Crying Lady in the halls. GHOSTS ARE REAL. 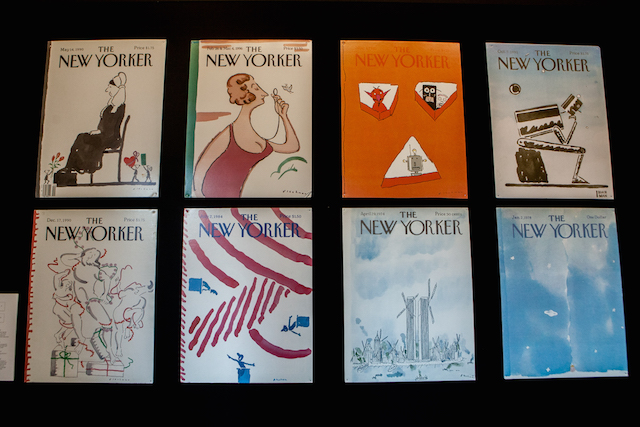 7. There's a gallery full of vintage New Yorker covers in the lobby of an UWS office building. It's not often that you find more than a security line in a corporate structure, but the lobby of 157 Columbus Avenue (near 67th Street) lets you look at some worthy art while you wait for the elevator. In fact, the lobby is filled with works by R.O. Blechman, a cartoonist who's graced the front covers of The New Yorker, and Story Magazine, and contributed pieces for The Village Voice, Harper’s Bazaar and Esquire, to name a few.

We probably wouldn't know about this tiny gem, but Untapped Cities' offices happen to be located inside the building, which is lucky indeed.

8. Upper West Siders file a lot of consumer credit card complaints. In 2012, the 10024 UWS zip code pulled in 25 credit card complaints, making it the second most popular zip codes for complaints—10023, which also covers the UWS, came in number 3, with about 20 complaints. Most of these were over billing disputes, which anecdotal evidence suggests was sparked by unsatisfactory lox-slicing at Zabar's just before Yom Kippur. The zip code with the most complaints, by the way, was that of Boca Raton, which is where Upper West Siders go to die/get their credit cards stolen. 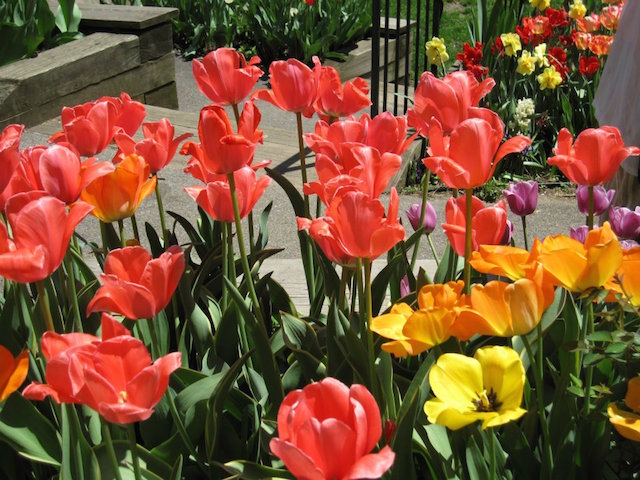 9. The West Side Community Garden's got the best non-Botanical Garden collection of tulips in town. The big league flower beds might grow in the Brooklyn and New York Botanical Gardens, but the tulips at the West Side Community Garden, located on West 89th/90th Streets between Amsterdam and Columbus Avenues, could give those guys a run for their money. The garden, which is privately owned and run entirely by volunteers, was a vacant lot until the mid-70s and had its official groundbreaking in 1987. It now features a flower garden, vegetable garden, and amphitheater.

The garden is always beautiful, but it's at its best in April, when it hosts its annual Tulip Festival. The free event features 15,000 breathtaking flowers in bloom, ushering in spring with a much, much-needed blast of color. You can also help plant the bulbs in November—the garden provides trowels, gloves and lunch, and you get to see your handiwork firsthand come spring.

And last but not least...

10. Some of the best NYC-centric movies have been filmed on the UWS. The Upper West Side is very photogenic, and as a result (or so I'd like to think), it's served as the setting for some of the best NYC films out there. Consider, for instance, Ghostbusters, which featured everything from Lincoln Center to Columbia University to Central Park South. Then, there's Black Swan, in which director Darren Aronofsky hauntingly captured the horror of the uptown 1 train. In Fatal Attraction, Michael Douglas's character lives on West End Avenue. In Hannah and her Sisters, Hannah lives on Central Park West (they also go through Pomander Walk).

And my two favorite UWS-set movies are pretty much cinematic love letters to the neighborhood. The first, Little Manhattan, follows 11-year-old protagonist Gabe (a pre-Hunger Games, pre-pubescent Josh Hutcherson) as he zips around mid-aughts UWS on his Razor scooter, offering us lovely shots of Fairway, Central Park, the American Museum of Natural History, and more.

Then, of course, there's You've Got Mail, a film that's thrown both AOL and the Upper West Side into a time capsule from 1998. Protagonists Kathleen Kelly and Joe Fox live around Riverside Drive and West End Avenue, and scenes are set everywhere from Grey's Papaya to Zabar's to Barney Greengrass, to H&H (RIP) to the Starbucks at 81st and Broadway. Indeed, two of the movie's most pivotal scenes take place on the Upper West Side, at Cafe Lalo on West 83rd Street and at the 91st Street garden in Riverside Park.

#Upper West Side
#original
Do you know the scoop? Comment below or Send us a Tip