10 Facts You May Not Know About Park Slope

Park Slope gets flak for its "Mommy Mafias," babyccinos, grocery store politics, and giant baby-eating rats. But aside from the stroller wars and super-twee brownstones, the neighborhood is full of history, once playing home to baseball teams and former presidents alike. Here's some lesser-known trivia about the de Blasio family's old stomping grounds—let us know some other factoids we missed in the comments. 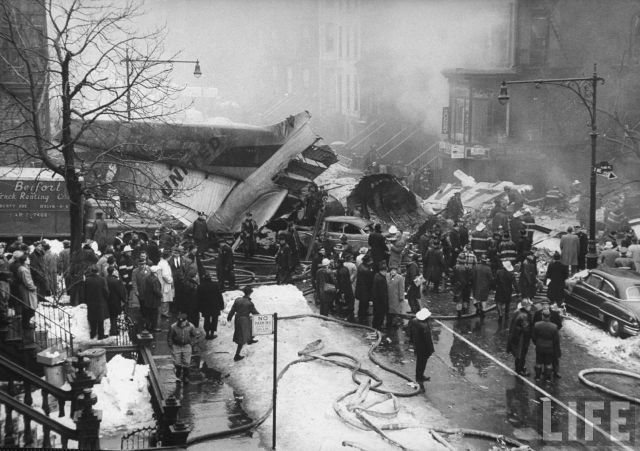 1. A plane crashed in the neighborhood in 1960, and you can still see some evidence of it today. On December 16th, 1960, a United Airlines plane collided with a TWA aircraft, with the planes crashing down in Park Slope and in New Dorp, Staten Island. 127 people died, including everyone onboard both planes and six people on the ground—11-year-old Stephen Baltz of Illinois was rescued from a snowbank near the wreckage at 7th Avenue and Sterling Place, but he died the next day.

There's a small plaque dedicated to Baltz, who was on his way to meet his mother and sister in Yonkers for Christmas, at New York Methodist Hospital where he died, and embedded on the plaque is the 65 cents in nickels and dimes he was carrying with him at the time of the crash. Beyond that, there's not much marking the crash. OR SO IT SEEMS—actually, if you look closely at 123 Sterling Place, located right at the crash site, you can see a difference in color in the brick where plane parts struck and knocked down some of the building. 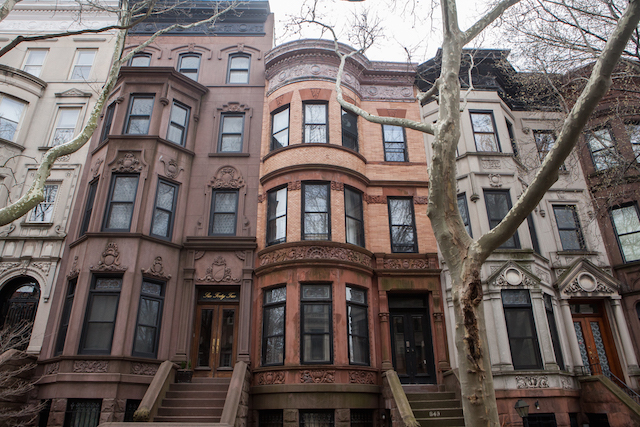 2. President Obama used to live by Prospect Park West. A few decades before Obama was kicking ass and taking names in the White House, he lived on the top floor of a brownstone at Second Street between Eighth Avenue and Prospect Park West. According to the Times, he co-habitated there with girlfriend Genevieve Cook in 1984, moving in about a year after he graduated from Columbia University. In fact, Obama used to run in Prospect Park, not knowing that he'd be landing in Marine One in that same park about 30 years later.

As we all know, Obama's Park Slope romance was not to be, and Cook wrote about him in her journal: "The sexual warmth is definitely there — but the rest of it has sharp edges, and I’m finding it all unsettling and finding myself wanting to withdraw from it all. I have to admit that I am feeling anger at him for some reason, multi-stranded reasons. His warmth can be deceptive. Tho he speaks sweet words and can be open and trusting, there is also that coolness — and I begin to have an inkling of some things about him that could get to me." Woof. 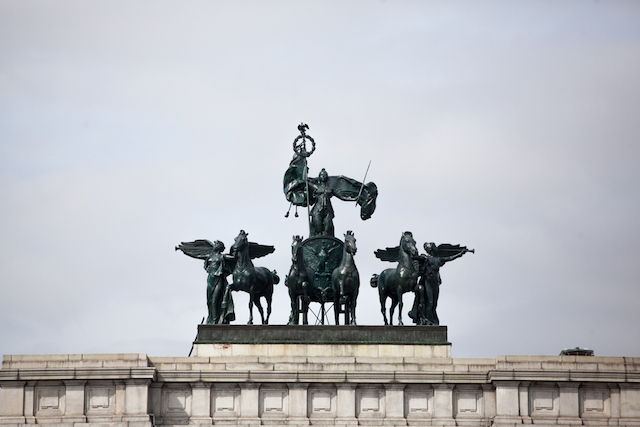 3. The Grand Army Plaza Victory figure fell off her chariot in the 1970s. Brooklyn's Grand Army Plaza was designed by Frederick Law Olmsted and Calvert Vaux in 1867, but the famed Soldiers' and Sailors' Arch came later in 1889—Vaux and Olmstead had sketched out designs for it, but the arch was eventually designed by architect John H. Duncan, and the cornerstone was laid by William Tecumseh Sherman.

Perched atop the arch is the famed winged goddess of victory, sitting in a chariot and flanked by two horses. The quadriga on which the Victory figure sits was installed in 1898, but Lady Victory tumbled from her chariot in 1976, which sounds quite scary. Thankfully, the arch was restored, and everything was as good as new by 1980. 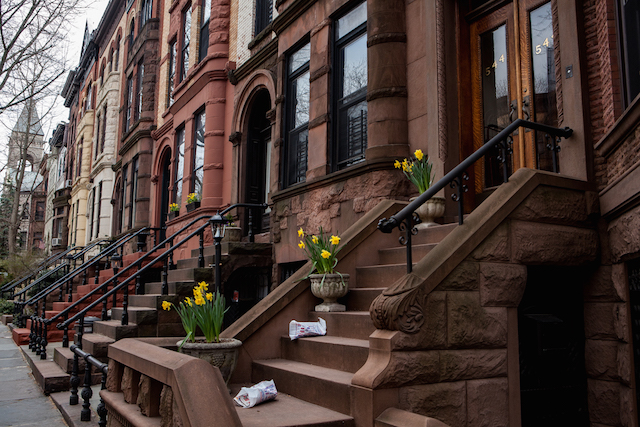 4. Stats whiz Nate Silver ranked Park Slope the "most livable" neighborhood in the city in 2010. It's true that a number of factors affect a neighborhood's "livability," and some people might prefer to avoid Park Slope's proliferation of stroller babies and the adults that cater to them. Still, when Nate Silver of FiveThirtyEight fame decided to scientifically rank each NYC neighborhood's livability factor, Park Slope objectively clocked in at number one.

Favorable factors included safety, for which the neighborhood came in at 15th, restaurants (12th), schools (14th), creative capital (10th), green space (9th) and nightlife (8th). To Silver, Park Slope is a "well-rounded neighborhood... blessed with excellent public schools, low crime, vast stretches of green space, scores of restaurants and bars, a diverse retail sector, and a population of more artists and creatives than even its reputation for comfortable bohemianism might suggest."

There were a few strikes against the neighborhood—housing costs, for instance, and diversity, both of which Silver found lacking. And 2010 was a long time ago, at least in real estate years—Pro Cro has since had its day in the sun. Still, if it's good enough for Hilary Duff, it's good enough for me.

5. The OG stadiums for the Brooklyn Dodgers were located in Park Slope. Anyone whose father would trade them in just to see Duke Snider make sport one last time can tell you Ebbets Field, erstwhile home to the Brooklyn Dodgers, was located in Flatbush (and demolished in 1960). But what's less well known is that before the Dodgers made their home there—and, in fact, before they were even technically the Dodgers—their baseball field was a place called Washington Park, and it was located on 5th Avenue between 3rd and 4th Streets in Park Slope.

Washington Park served as the Dodgers' (then the Brooklyn Atlantics') home from 1879 to 1889, whereupon the team was moved to Ridgewood, East New York, and then Third and Fourth Avenues between First and Third Streets, which is technically Gowanus now. The Atlantics were renamed the Dodgers, and they played at this stadium from 1898 to 1912. When the Dodgers moved to Ebbets Field, the park was briefly used by the Brooklyn Tip-Tops (of the now defunct Federal League), and was then bought by Con Edison and turned into a utilities facility. There is still a wall at the site that was long thought to be the last remaining piece of the stadium, though historians are unsure whether it really predates the Dodgers' departure in 1912. 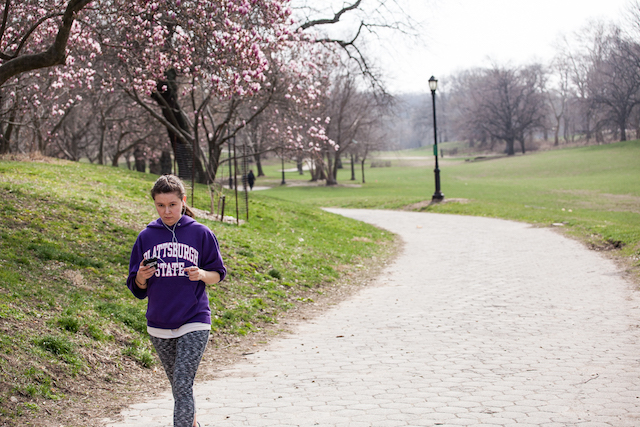 But I moved to Prospect Heights recently, and have since fallen in love with this smaller, but indeed lovelier park. It's less crowded, for one thing, and the design is certainly an improvement over its older, bigger brother. This is no accident—the aforementioned Vaux and Olmsted designed both parks, and all the kinks in Central Park's layout were corrected when it was time to blueprint Prospect Park. Olmsted considered Prospect Park to be his true "masterpiece," and he wasn't wrong. The road runs around the outer ring of the park, leaving meadows, ravines and groves untouched. The lake is bigger, the bandshell concerts have better shows, and the park is, on the whole, a bit more manageable than that thing in the Big City.

Still, Central Park is Central Park, amd it should be noted that while Prospect Park has the better design, I still believe that Central Park has more to offer in terms of activities. (You can try to convince me otherwise in the comments.) As NY Mag pointed out at some indeterminate point, "[d]ebating the relative merits of Central Park and Prospect Park is a bit like arguing over whether the Atlantic or the Pacific is the better ocean."

The argument rages on to this day, usually followed by a huge fight over preferred bagel shops. I'll probably change my mind a couple of times this afternoon. 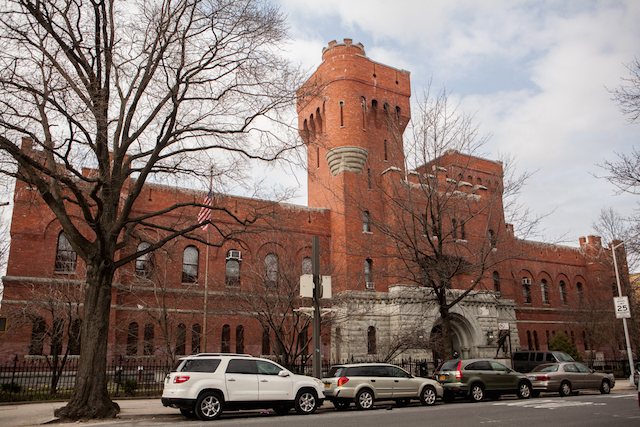 It's been said that there are footprints on the Armory's ceiling and walls thanks to ghosts left over from the Spanish American War. If that's not dramatic enough, there is also allegedly a Civil War vet ghost wandering around the armory somewhere. And even if you don't believe in ethereal spirits, there's some fun stuff lurking in the Armory—there used to be a secret underground tunnel running from the Armory to the middle of Prospect Park, the Brooklyn Dodgers reportedly practiced in the space from 1955 to 1956, and balloons from the Macy's Thanksgiving Day Parade were stored there once upon a time. 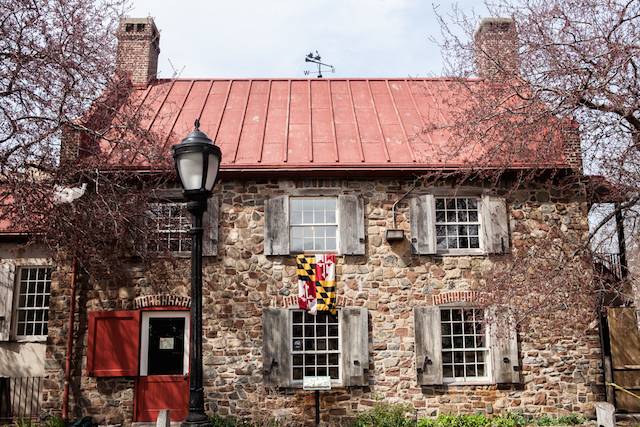 8. Park Slope played an important role during the American Revolutionary War. Long before the Park Slope Food Coop fought over Israeli hummus, Park Slope played host to another decisive battle—the Battle of Long Island, which occurred in 1776. American soldiers were holding down the fort in Brooklyn Heights when the British landed on Staten Island and made their way to Gravesend Bay. The Americans had to tighten up their front lines from the Brooklyn Harbor through where Prospect Park is today as the British army moved westward through what is now Park Slope, eventually taking over a stone farmhouse located at Fifth Avenue and Third Street.

The Brits planned to lay siege to the Americans, but the army managed to evacuate, and made it across the East River to Manhattan before that siege could begin. Historians have called the Battle of Long Island a "turning point" in the Revolution. And though that stone farmhouse, called the Vechte-Cortelyou House, was destroyed in 1897, some of the original stones were unearthed in 1993, and it's since been reconstructed at 336 Third Street. You can visit the house today, or rent the space out for events.

9. Park Slope was once considered a "streetcar suburb." Park Slope was settled by Dutch farmers way back in the 17th century, but it didn't become a real "neighborhood" until the mid-1800s, when developers began building selling brownstones and Victorian mansions in the area (the park wasn't completed until 1873). During this period, Park Slope became known as a "streetcar suburb,"—as in, a nice, safe residential area that developed along streetcar lines.

It's also noteworthy that Park Slope's borders have been in dispute for over a century. In 1904, the neighborhood ran from Grand Army Plaza/Prospect Park West to 5th Avenue, down to 9th Street and 7th Avenue. By 1969, those northern borders crept up to where the Barclays Center is now (with Flatbush Ave serving as the dividing line), stretched west to 4th Avenue, and ended all the way down at Greenwood Cemetery. Realtors split Park Slope into a Northern and Southern district back in the 1970s, and excluded the then-dicier northwest portion (4th to 6th Avenue, Atlantic Terminal to 3rd Street) thanks to a spike in crime. In 1993, the Slope was split into thirds (North, ending at Union Street, Center ending at 9th Street, and South terminating at the Prospect Expressway) and the neighborhood's been rezoned at least once since. 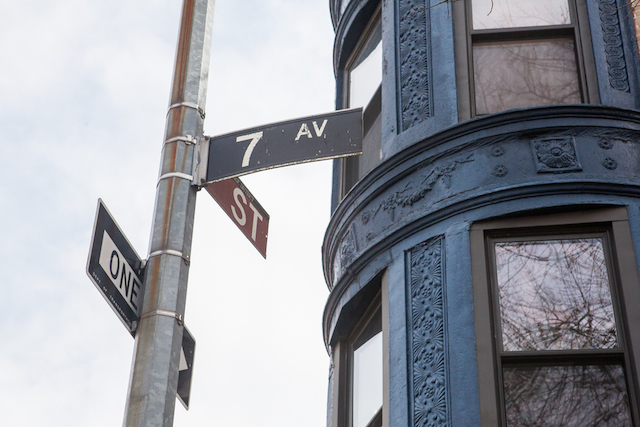 10. One of the city's oldest remaining street signs still exists in the area. Park Slope is full of nearly invisible historical artifacts, as evidenced by most of the fun facts already laid out on this list. And one of the most easily overlooked pieces of history is the 50-plus-old street sign hanging out on 7th Avenue and 1st Street.

The black "7 Av" sign was installed in 1964, when the then-Department of Traffic started installing large vinyl color-coded aluminum street signs all over the city. The signs were color-coded by borough, and Brooklyn was blessed with black ones with white script. Manhattan's and Staten Island's signs were yellow with black lettering, the Bronx got blue with white lettering, and Queens got blue writing on white.

#neighborhood history
#park slope
#original
Do you know the scoop? Comment below or Send us a Tip